PRICE & ANDERSON POWER THROUGH TO QUARTER-FINALS

Gerwyn Price and Gary Anderson advanced to the quarter-finals of the William Hill World Championship with comfortable victories at London's Alexandra Palace on Wednesday.
World number three Price saw off Mervyn King in five sets, while two-time World Champion Anderson demolished Devon Petersen 4-0 as the quarter-final line-up was completed on the final day of darts in 2020.
Daryl Gurney, Dirk van Duijvenbode, Dave Chisnall and Stephen Bunting also progressed to the last eight of the 2.5 million pound tournament, which will resume on New Year's Day.

Price put on an exhibition of finishing, with three ton-plus checkouts and a double success rate of 52 percent in a convincing victory over King. The Welsh star won by three sets in a high quality affair, in which no leg took more than 16 darts to complete. 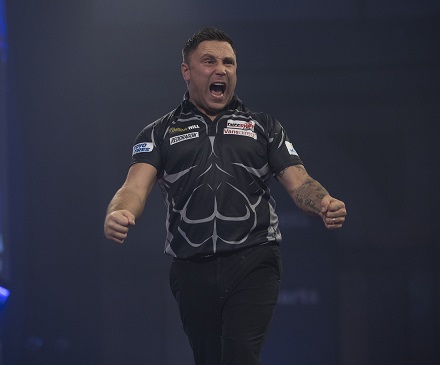 "I felt quite comfortable for most of the match but it was little bit patchy at times," said Price, who will take on Gurney in the last eight. "Mervyn wasn't quite as good as he has been in the last few weeks and I took advantage. "I just did what I do best and finished well. I never felt under pressure. I hit at the right time and he missed at the wrong time. "Daryl is a fantastic player and I'll have to be at my best to beat him but I'm determined to go on and win the tournament because I've got my eyes on that world number one spot."

Price hit double top to win each of the first four legs, which included combination checkouts of 148 and 115, but only claimed one of the first two sets as King edged the second in a deciding leg. Last month's Players Championship Finals runner-up King took the lead in set three with a 106 finish, only to see Price win the next three legs to regain the advantage. The Welshman then took out 93 in the deciding leg of the fourth set to move into a 3-1 lead as he edged towards a second successive World Championship quarter-final. A fabulous 116 checkout moved Price 2-1 ahead in set five and a leg away from the win, which he wrapped up in the next leg after King missed three darts to stay in the tie. 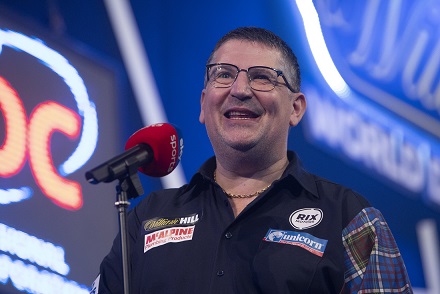 Anderson's straight sets victory against South African star Petersen saw the 2015 and 2016 World Champion progress to the quarter-finals at Ally Pally for the eighth time.
The Scottish ace raced through the first set with three unanswered legs before checkouts of 160 and 97 saw him come from two legs behind in the second set to double his lead. Petersen also led by two legs in set three but was punished for three missed doubles as Anderson again overturned a two-leg deficit to move within a set of victory - and he promptly made it six successive legs to wrap up the win.

"Devon's scoring wasn't where it has been this year and I nicked it," said Anderson. "I'm nowhere near where I should be playing but next year I'll start from scratch and get myself back to it. "I've managed to scrape through like I did when I got to the World Matchplay final. This run is a real bonus for me."

Anderson will meet Van Duijvenbode on New Year's Day after the Dutch talent continued his fine form in 2020 with a sudden-death success over Premier League champion Glen Durrant. 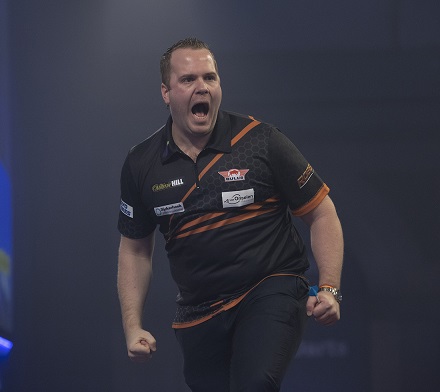 Van Duijvenbode, who reached the World Grand Prix final in October, came from 3-1 down to win another thrilling battle in a memorable fourth round, which saw four of the eight ties go to last-leg shoot-outs.
Durrant recovered from losing the opening leg to win the first set 3-1, before a sublime 154 checkout helped him edge the second set after Van Duijvenbode had missed four darts to level. Two 11-darters helped the Dutchman win the third set 3-1 but Durrant claimed the fourth by the same scoreline to move within a set of victory. A spell of flawless finishing saw Van Duijvenbode stay in the match as checkouts of 113, 106 and 92 earned him the fifth set. He then executed his second 170 finish of the tournament as he levelled up the match, before going on to edge the seventh set to progress by pinning double six.

"I felt like I was better than Glen for most of the match and found myself 3-1 down," said Van Duijvenbode. "I would have been devastated to have lost but I had to make sure I didn't get too frustrated. I dug deep and I won. "I kept believing in myself like I always do. I think I hurt him with the 170. I was pretty nervous for a lot of the match to be honest but that is good thing and I managed to use it in a positive way. I enjoyed the match and I'm really happy to be through." 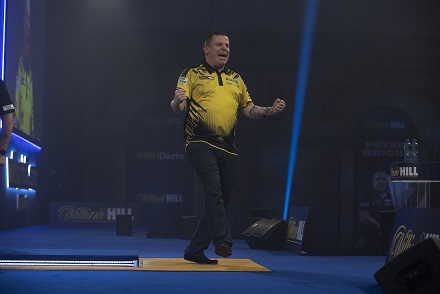 Chisnall won a high quality encounter against World Matchplay champion Dimitri Van den Bergh 4-2 to set up a quarter-final clash with world number one Michael van Gerwen.
Both players averaged over 101 in exciting encounter that saw Van den Bergh threaten to fight back from losing the opening three sets before Chisnall finished the job with a classy 102 checkout. World number eight Chisnall expertly executed a 144 finish to take the first set before punishing two missed set darts by Van den Bergh to double his lead. The Belgian ace missed the bullseye when attempting to take out 161 to win the third set, allowing Chisnall to punish again as he closed in on victory. Van den Bergh kept his hopes alive by taking set four in three legs, with the aid of two 12-darters, before kicking off the fifth set with a 121 checkout for another dozen-dart leg. Yet another 12-darter for the former World Youth Champion saw Chisnall's lead reduced to a single set, but he won a nervy third leg in the sixth set before landing a sweet match-winning 102 checkout to reach the last eight at Ally Pally for the third time.

"I could've won that game a little bit more comfortably but I'm just happy to have won it," said Chisnall. "I've felt really confident throughout the whole tournament and I think it will be a great match against Michael van Gerwen. "I will just have to tidy up a few sloppy darts but I know I can beat him. It will be a fast, exciting game and I'm looking forward to it." 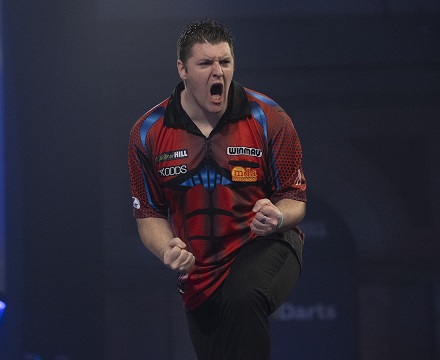 Former World Grand Prix champion Gurney progressed to the last eight at Alexandra Palace for the second time in his career after a 4-2 victory over Vincent van der Voort.
Gurney took out 125 to break in the opening leg and went on to win the first set 3-1, before Van der Voort responded with a 111 checkout on the way to winning the second set in five legs. Gurney missed double 12 for a nine-darter in the first leg of set three, which he won, before a 120 finish saw him move two sets clear. Two-time Ally Pally quarter-finalist Van der Voort used just 41 darts in the fourth set, which he won without reply. Gurney missed six darts to win the sixth set 3-1 but returned to finish the job in the following leg after his opponent missed a dart at the bullseye to stay in the contest. 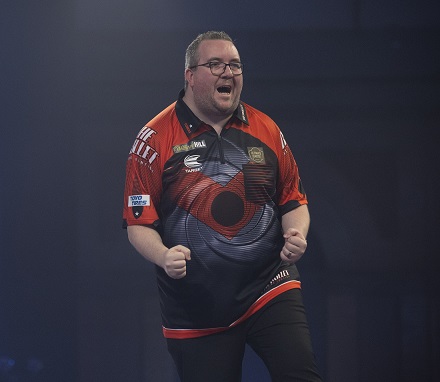 Former Lakeside Champion Bunting also made it through to the quarter-finals for the second time after winning in a sudden-death shoot-out against Ryan Searle.
Bunting, who had previously reached the last eight on his PDC World Championship debut in the 2014/15 event, won the first two sets but missed seven darts to make the scoreline 3-0, allowing Searle to pinch the third set before levelling the tie. The St Helens man kicked off the fifth set with an 11-darter and went on to win it in three legs, but Searle responded with 12, 15 and 13 dart winning legs as he took the sixth set 3-1 with the aid of a 100 checkout. Brilliant finishes of 145 and 90 followed as the Wellington ace put the boot in and moved within a leg of victory. Bunting battled back, however, taking out 84 to complete an 11-darter before a fabulous 107 checkout forced a deciding leg, which he won with a 13 darter on tops, with Searle waiting on 16.