Dave Chisnall stunned Michael van Gerwen to reach the semi-finals of the William Hill World Championship with a sensational straight sets victory over the world number one at London's Alexandra Palace on New Year's Day.
Two-time World Champion Gary Anderson, world number three Gerwyn Price and former Lakeside Champion Stephen Bunting also reached the last four with victories on Friday - but it was Chisnall who stole the show with a breath-taking display.

The world number eight ended a 27-match run without a win over three-time World Champion Van Gerwen with an emphatic victory, in which he averaged 107.34 and rattled in 14 180s. 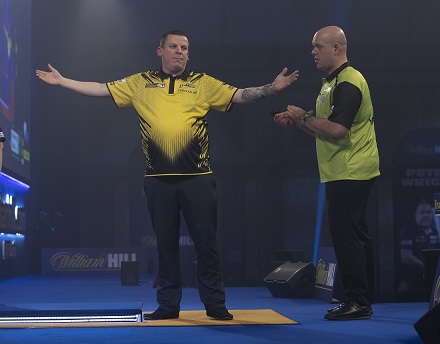 "I'm so proud. I've put the effort in and it's paying off. I'm playing really well," said Chisnall after beating the Dutchman for the first time in almost five years to follow up Wednesday's defeat of World Matchplay champion Dimitri Van den Bergh. "Michael wasn't playing his best and I got frustrated that I let him into a few of the sets that went down to deciders, but I felt really comfortable and I deserved to win. "I've been under the radar for the last few years but I want this World Championship title and I know I am playing well enough to win it."

Van Gerwen won the first leg but Chisnall produced a stunning burst, with an 11-darter and two 12-dart legs, to take the first set with an average of over 112 - hitting a sublime 141 checkout along the way. The Morecambe man made it five legs on the spin before eventually edging the second set 3-2 to double his lead. A 114 checkout helped him extend his lead to three sets, taking the third 3-2 despite a marvellous 150 checkout from Van Gerwen. Chisnall missed double 12 for a nine-darter as he won the fourth set 3-1 to open up a 4-0 lead against the Dutch ace, who provided a bizarre but brilliant moment when he hit treble 20, treble 19 and then double 12 immediately after his opponent missed his attempt at the finish - despite Van Gerwen not being on a checkout! Chisnall finished the job in style, taking out 130, 87, and 80 to take the fifth set 3-1 and book his place in the semi-finals at Alexandra Palace for the first time.

Reflecting on the defeat Van Gerwen, who has lifted the Sid Waddell Trophy three times in the past seven years, said: "It was difficult match. Dave took every opportunity he had and fair play to him but I let myself down a little bit. I didn't turn up. My scoring power wasn't there. "All I can say is well done to Dave, it is the best he ever played. He played well and I didn't. I can only blame myself. I need to reflect on my game and work out what went wrong. I'm gutted."

Chisnall will take on Anderson on Saturday after the two-time World Champion eased through to the semi-finals with a 5-1 triumph over Dutchman Dirk van Duijvenbode. 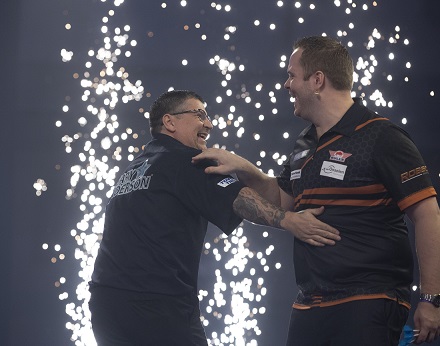 The Scottish great reeled off five successive sets to reach the last four at Alexandra Palace for the sixth time in his career as he produced his best performance of the event so far.
Three 14-darters saw Van Duijvenbode take the first set 3-1, but Anderson then claimed ten legs in a row to move 3-1 ahead in sets and 2-0 up in the fifth. That run ended after a brilliant 131 checkout, but the Scot still went on to win that set 3-1, before winning set six in a decider by landing tops after Van Duijvenbode's parting shot of 180.

"That was good. I think I've played better as the tournament has gone on," said Anderson, who averaged 101.07. "Dirk's a cracking player so I'm pleased to get through. I still made a few mistakes but I'm happy. "I think that might have been the best I've played for a couple of years and once it gets to the last four, it's anybody's tournament to win." 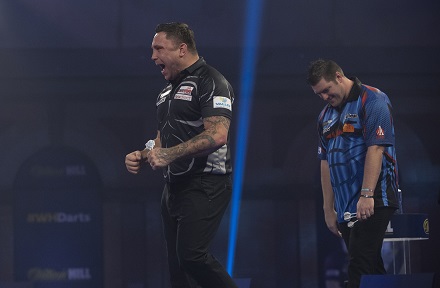 Third seed Price reached the semi-finals for the second successive year after a tense nine-set battle with Daryl Gurney, which went all the way to a sudden-death leg.
Price, who will become world number one if he wins the 500,000 pound top prize on Sunday, twice opened up two-set leads but Gurney fought back to force a decider, in which he failed to get a dart at a double from 108 and the Welsh ace held his nerve to advance.

"I bombed a couple of sets where I missed loads of doubles. I was very lucky," admitted Price. "At 4-2 up I had it in the bag but at four all I had to pull it out of the bag. I was up against it. I've certainly learned a big lesson tonight. I shouldn't be complacent when I am 4-2 up. "It must have been nerve-wracking for my wife and family to watch. Maybe I wanted it too much but I'm still in the tournament and I'm going to give it my all."

Gurney opened the match with a 180 but finishes of 64 and 108 helped Price take the first set by three legs to one. The Welshman doubled his lead by taking three unanswered legs in set two, but Gurney responded with checkouts of 73 and 75 to win the third set by two legs. He then made it two sets apiece but was punished for missed doubles as Price landed a brilliant 143 checkout to win the fifth set 3-1 and regain the lead. Gurney was again made to pay when he missed a dart at tops for the sixth set, as Price took out 72 to restore a two-set cushion. The Northern Irish ace refused to go quietly, though, and clinched six successive legs to take the match into a deciding set. Price took out 107 in the decider, while Gurney replied with a 130 finish as the match went down a last-leg shoot-out, which the Welsh ace claimed by landing tops. 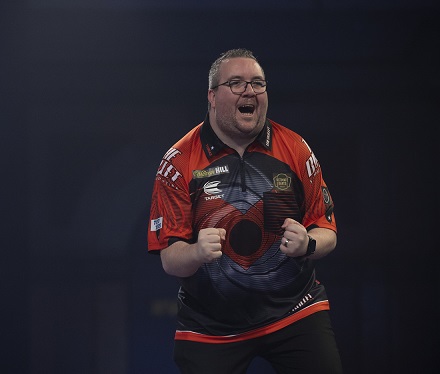 Bunting reached the semi-finals at Ally Pally for the first time after inflicting defeat on birthday boy Krzysztof Ratajski, who turned 44 on New Year's Day.
An early burst saw Merseyside ace Bunting take the first three sets, opening up a lead which proved to be unassailable for Poland's number one. Ratajski began the tie with a 104 checkout but Bunting won the next six legs, landing a 127 finish along the way. The Polish star stopped the rot but couldn't prevent Bunting extending his lead by winning the third set 3-2. Ratajski managed to edge set four despite pressure from Bunting, who produced a brilliant 170 checkout to level up the following set before pinning double 16 to move within one of victory. A 74 finish helped Ratajski reduce the deficit to two sets as he took the fourth 3-1, before a 124 checkout on the bull in set seven helped him close the gap to a single set at 4-3. Bunting, however, avoided the prospect of a deciding set by winning the next three legs to earn a semi-final spot.

"This is the best win of my career. Getting to the semi-finals of the biggest tournament in the world is the best thing I've ever done. I'd love to win it," said Bunting, after bettering his quarter-final run of 2015. "It's been a difficult run for me but I never give in, never say die and I'm dangerous. If I can keep my nerve I've got a great chance of winning it."