Gerwyn Price and Gary Anderson will lock horns in the final of the William Hill World Darts Championship after victories on a record-breaking semi-finals night at London's Alexandra Palace on Saturday. The pair will contest the decider of the 2.5m pound tournament on Sunday evening, when the victor will lift the Sid Waddell Trophy and earn a 500,000 pound top prize.
Third seed Price defeated Stephen Bunting 6-4 in an entertaining encounter which broke the record for ton-plus checkouts in a World Championship meeting with 13 three-figure finishes, while two-time World Champion Anderson got the better of Dave Chisnall in nine sets. 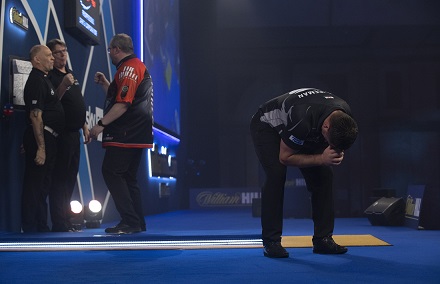 Price moved into his first Ally Pally final after contributing eight checkouts of over 100 to equal the individual record for ton-plus finishes in a World Championship match, as he moved a step closer to becoming World Champion and world number one for the first time. The Welshman landed 15 180s and averaged over 100 to see off a gutsy performance from Bunting, which included 11 maximums and a doubles success rate of 53 percent. 2020 World Grand Prix winner Price, who has come through two sudden-death leg wins on his way to the final, came from 4-3 behind to book his place in the sport's showpiece occasion.

"That's the best I've played in this tournament and I needed to. I'm here to win this and I'm in the final so I've got every chance now," said Price, who will replace Michael van Gerwen as world number one if he pockets the £500,000 winner's cheque on Sunday. "Stephen played really well and he punished me whenever I slipped up. There were a couple of sets where I was 2-0 up and he came back. He gave me a really good battle. "I'm full of confidence after that game. I definitely improved for this match but there is a lot more in the tank. I always seem to find that bit of extra edge when I need to and I know I have got what it takes to win the final." 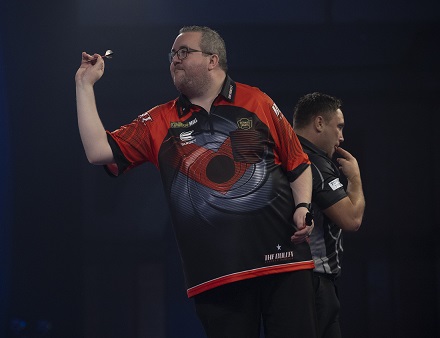 Bunting hit checkouts of 120 and 117 in the opening set but could not prevent Price, who finished 109, taking the lead by edging a deciding fifth leg. A brilliant 140 finish put the Welsh ace 2-0 up in the second set but Bunting bounced back, claiming the next three legs to level the tie. A superb 12-darter saw the Merseyside man win the decider in set three to move in front, before firing in a sublime 136 checkout in the fourth. Price replied by cleaning up 131 - only for Bunting to win the following two legs as he opened up a two-set lead.
Price won nine of the next 11 legs to draw level and move two legs up in set seven, but a 118 checkout from Bunting completed another three-leg burst as he regained the edge at 4-3. Two 12-darters and a 13-dart leg saw Price clinch the eighth set 3-1, before the game's record-surpassing 12th ton-plus finish, 112, helped the world number three take set nine in straight legs. Price added another big finish in what proved to be the final set, taking out 103 to level before going on to seal the match on tops after Bunting had recorded his 11th maximum.

2015 and 2016 World Champion Anderson progressed to the final at Alexandra Palace for the fifth time after a 6-3 success over Chisnall, who could not repeat the heroics of his quarter-final whitewash win over world number one Van Gerwen 24 hours earlier. The Scottish star averaged over 100 and rattled in 13 180s to set up the clash with Price, where victory would see him return to the top four on the PDC Order of Merit. 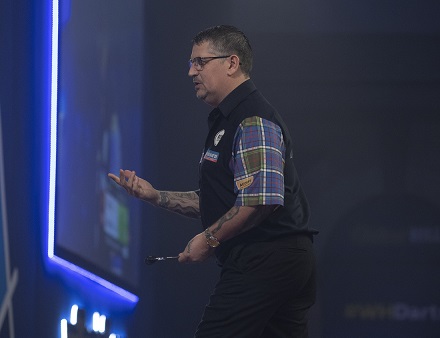 "I've come here with no expectations whatsoever but I've managed to make it through to the final so it can't be bad," said Anderson, who also reached the World Matchplay final in July. "It didn't feel like a great game so I was surprised to see that I averaged over 100. It didn't feel like that. "I feel like I've played alright for most of this tournament and I'll give it a good go in the final. "I think I need to play better against Gerwyn but I'll just play my darts and he'll play his. I'll be quiet and he'll be loud and we'll see how it goes." 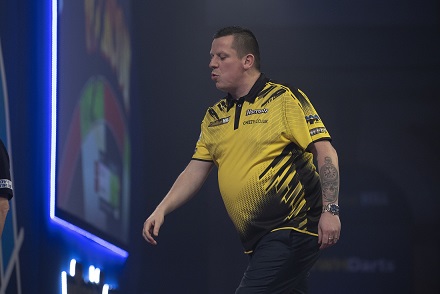 Anderson edged the first set 3-2 with the aid of a 124 checkout, but Chisnall replied with the tournament's sixth 170 finish before taking set two by the same margin. All five legs were also played in the third set, which Anderson claimed with an 84 finish before extending his lead by taking the fourth 3-1. Chisnall hit back with a 124 checkout of his own on the way to reducing his opponent's lead to a single set, only for Anderson to restore a two-set cushion by winning the sixth set in five legs. World number eight Chisnall cut Anderson's advantage to 4-3 but the Scot then reeled off six unanswered legs to move into Sunday's final.

Sunday's final will be a repeat of the 2018 Grand Slam of Darts final between Price and Anderson, which the Welshman won 16-13.
The game will also be Anderson's fifth final in 11 years at Alexandra Palace, with his wins in 2015 and 2016 accompanied by losses to Adrian Lewis in 2011 and Van Gerwen in 2017.