Reigning champions Wales made a strong start to their defence of the Cazoo World Cup of Darts title, as former winners Netherlands and Scotland also progressed in Jena on Thursday.

Gerwyn Price and Jonny Clayton won the World Cup for Wales for the first time last year, and renewed their partnership in impressive style with a 5-2 defeat of Finland.
They won the opening four legs against Veijo Viinkka and Marko Kantele, who took out 95 using the bull and tops as the 2013 semi-finalists halved the gap at 4-2. Wales, though, closed out victory as Premier League champion Clayton pinned double ten in the next leg as they moved through to a second round tie with Lithuania on Saturday. 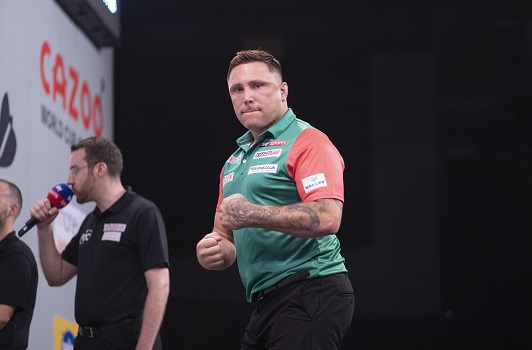 "It was pretty decent early on," said World Champion Price. "We got the job done and the first round is always the hardest one. "It's difficult to find a rhythm but we came through it. We know how well we can both play and I think we'll be a force to be reckoned with now. "Off the board we're the best of friends and it certainly helps, That showed last year - we had a slow start today but hopefully we'll pick our game up on Saturday."

Lithuania's Darius Labanauskas and Mindaugas Barauskas won through to the last 16 for the second successive year, defeating Hungary's János Végso and Patrik Kovács 5-3 in the tournament's opening game. Patrick Kovacs took out a superb 135 bull finish in leg four to level, but Lithuania took the next two legs to move 4-2 up and Labanauskas held his nerve on double four to seal the win. 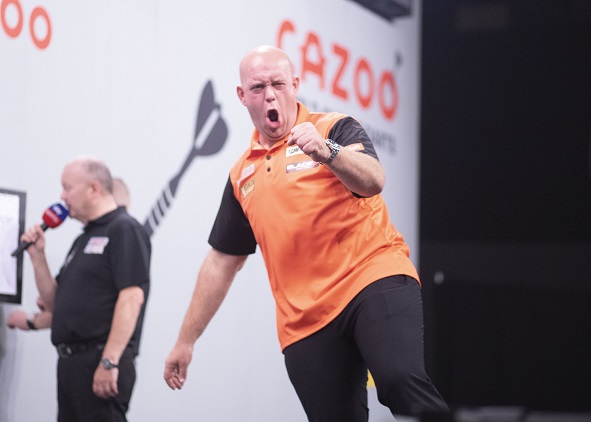 The Netherlands' challenge to win a fifth World Cup title saw Michael van Gerwen and Dirk van Duijvenbode defeat Denmark's Andreas Toft Jørgensen and Niels Heinsøe 5-1.
The Dutch found themselves a leg behind early on after Heinsøe pinned double six to win the opener and threaten an upset. Debutant Van Duijvenbode levelled on double 16 in leg two, and Van Gerwen posted the winning double in the next four legs as the Dutch progressed to a last 16 tie with Singapore.

"It's a dream come true but it's also a little bit of pressure," said Van Duijvenbode, the 2020 World Grand Prix runner-up. "I'm playing with the best player in the world. I'm here to win. I've always been good in pairs in local competitions and I like it." 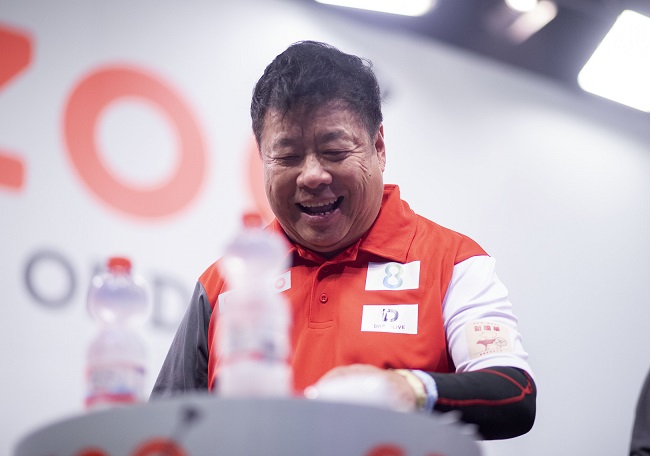 Singapore's Paul Lim and Harith Lim came from 3-0 and 4-2 down to defeat Gibraltar's teenage pairing of Justin Hewitt and Sean Negrette 5-4.
A slow start saw Singapore slip behind, missing nine doubles to win the opening leg as Gibraltar stole the advantage and then finished 81 and double ten to take a three-leg lead. Singapore won the next two before a 100 finish moved Gibraltar to the brink of only their second World Cup win - but Paul Lim landed tops to keep their hopes alive, Harith Lim finished 108 to take the game to a decider and the 67-year-old veteran took out 116 to snatch victory.

"I'm glad we pulled through - it's made the long trip worthwhile!" said Paul Lim. "My last competition was the World Championship in December and Harith has had no competition for a year. "The first leg gave them a lot of confidence but darts is never over until it's over. I told Harith we had to take one leg at a time." 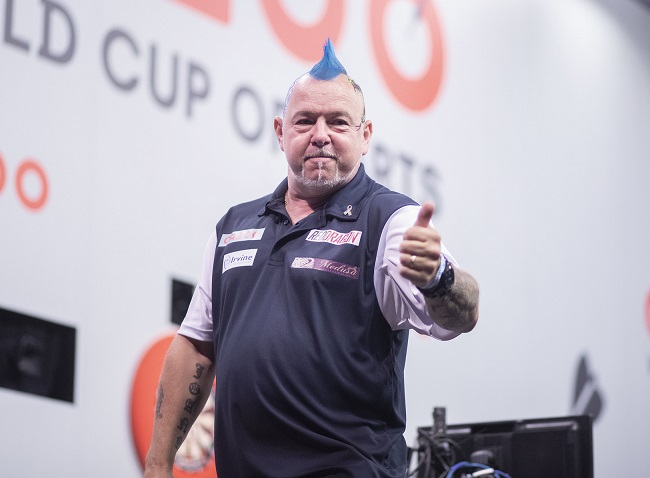 Scotland's Peter Wright and John Henderson cruised past Chinese debutants Jianfeng Lu and Wenqing Liu as the 2019 champions began their bid to win a second World Cup title with a 5-0 whitewash.
The new pairing of Wright and Henderson teamed up strongly to deny the Chinese duo a dart at a double in a one-sided contest, which included a 13-darter in leg four and a two-dart 84 checkout from Henderson which wrapped up the win.
Scotland will now meet Poland in round two in a mouth-watering tie on Saturday.

Henderson was a late call-up to the Scottish team in the absence of Gary Anderson, but said: "It's always a privilege to put this shirt on. "It's fantastic. I love playing with Peter - it's going to give me so much confidence, so I'm looking forward to Saturday. I've got the world number two by my side!" 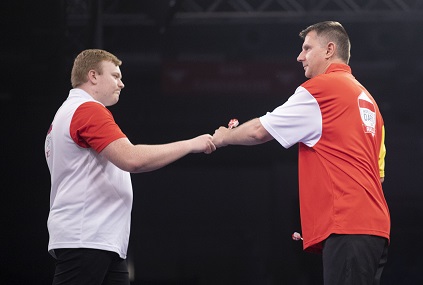 Poland's Krzysztof Ratajski and Krzysztof Kciuk produced a sensational 104.97 average to defeat Czech Republic duo Karel Sedlacek and Adam Gawlas 5-2 in a high-quality tie. Legs of 15, 14 and 13 darts helped the Polish pair into a 3-0 lead, with Sedlacek finishing 68 and Gawlas taking out 124 as they hit back to 4-2. The Polish duo had, though, taken out a 14-darter to win their fourth leg and Ratajski finished 122 to complete a superb display - ending with the second-highest average in the best-of-nine leg Doubles first round format. 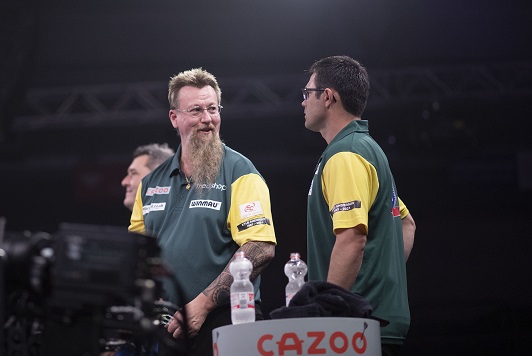 Australian duo Simon Whitlock and Damon Heta paid tribute to Kyle Anderson after whitewashing Italy's Danilo Vigato and Michele Turetta.
Whitlock had competed alongside Anderson in four World Cups, while Heta grew up in Perth with the former Auckland Darts Masters champion, who passed away last month. The Australians are bidding to go one better than in 2012, when they were runners-up in the World Cup, and are aiming to use Anderson as an inspiration at the Sparkassen Arena this weekend. They denied the Italian debutants a dart at a double in the tie, finishing with a flourish with legs of 13 and 14 darts to end the contest with a 93 average.

"I'm very emotional," admitted Whitlock. "We're not just playing for Australia, we're playing for Kyle as well. "It means the world to me and Damo. We've got our hearts on our sleeves and Kyle's name on our sleeves. The atmosphere when the crowd were singing Kyle's name was amazing. "We're thinking about Kyle with every single dart we throw and this is the one we really want. We're focused on winning, not just for Australia but for Kyle." 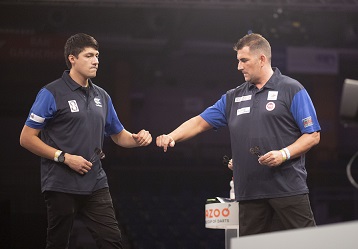 The Australians will now meet America after Danny Lauby and Chuck Puleo produced a strong performance to sweep aside Sweden's Daniel Larsson and Johan Engström 5-1.
A high-quality opening saw Sweden counter an opening 13-darter from America with a 14-darter to level. Lauby, though, hit tops to match that in leg three and landed a 180 as they break in the fourth, while the left-hander punished Sweden for missing the chance to steal the next as they moved 4-1 up, with Puleo then pinning double ten to complete a comprehensive victory.

The first round concludes on Friday evening in Jena, with four-times winners England taking on Brazil and former finalists Belgium and the Republic of Ireland meeting Greece and Portugal respectively.