Michael van Gerwen became the first player to qualify for the 2021 Unibet Premier League Play-Offs with an 8-4 victory over Gary Anderson on Tuesday's Night 14 in Milton Keynes. 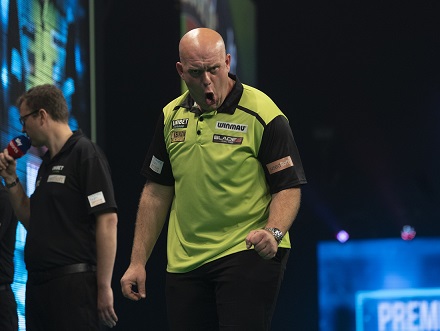 Aiming to add a sixth Premier League title to his résumé by the end of the week, Van Gerwen returned to the top of the table by securing the two points to delight his fans at the Marshall Arena. Despite two ton-plus finishes from Anderson, who was on target with an impressive 57% of his checkout attempts, Van Gerwen averaged 98 in a workmanlike display to come out on top in the battle of former Premier League champions.

"It's been a long wait for me to win in front of fans but it feels good now it is finally here," said Van Gerwen, who ended Anderson's hopes of a top four finish in the process. "I feel good again, but you have to show it on the stage. After last night's disappointment it was important for me to put it right tonight. "Now I can start to focus and work towards the semi-finals. I'm going to keep enjoying playing in front of the crowds for the next couple of nights and get myself ready for Friday when I hope to lift this title again." 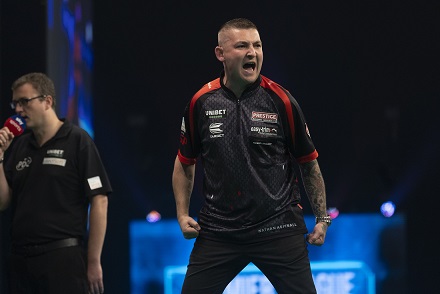 Van Gerwen knocked Nathan Aspinall off top spot after the 2020 Premier League runner-up was held to a 7-7 draw by James Wade. A win for Aspinall would have seen him book his place in Friday's finale, but after going 7-5 up he was pegged back by Wade to share the points. While a point was not enough to keep Wade's hopes of a Play-Off spot alive, Aspinall was left frustrated with the result and will have to wait another night to secure his place in the semi-finals.

"It wasn't to be tonight," Aspinall conceded. "I'm gutted but I think a draw was probably a fair result. "It would mean everything for me to get over the line and reach the Play-Offs. After the 12 months I've had it would prove to a lot of people that I'm not a flash in the pan. "I want to keep proving people wrong, and it's up to me now to go out and finish the job." 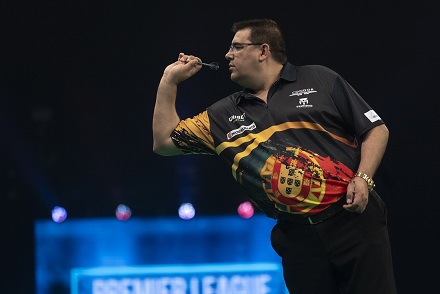 Jose de Sousa took another big step towards securing a final four place in his debut campaign as he defeated Jonny Clayton 8-5.
De Sousa, who has not suffered defeat since Night Eight, racked up a third successive win against fellow-newcomer Clayton despite hitting just three 180s. Known for his prolific scoring, on this occasion it was De Sousa's 57 percent checkout success rate that helped him to the winning line to cement third place in the table. 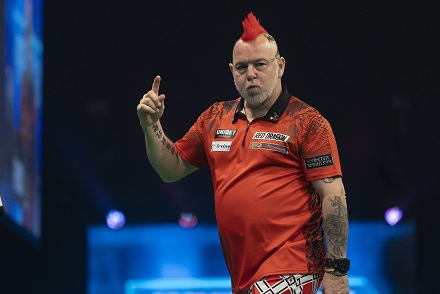 Peter Wright kept his feint Play-Off hopes alive with an 8-5 victory over Dimitri Van den Bergh.
Wright, who began the week knowing he needed to win all of his remaining league matches to stand a chance of reaching the Play-Offs, made it back-to-back victories against Van den Bergh as he averaged 102.82. The Scot hit eight of his 14 checkout attempts, including two ton-plus finishes, to inflict a fourth defeat in five matches upon Van den Bergh, whose Play-Off dream remains in the balance with two matches to play.

"I'm still on a high with having the crowds back," said Wright. "I didn't play as well as I wanted to but I did enough to get the win. "When I know I need to win legs I find a way to do it, even against the best players in the world. I've kept myself alive in the competition for another night at least. "Every game feels like a knockout game for me now because I know I can't afford anymore slip-ups. I will keep fighting."

Wednesday will see the penultimate night of league phase action take place, as Clayton takes on Wright in the opening game of the night, before Van den Bergh seeks a return to winning ways against Wade. Aspinall and De Sousa can then secure Play-Off berths with victories over Anderson and Van Gerwen respectively in the final two matches of the evening.