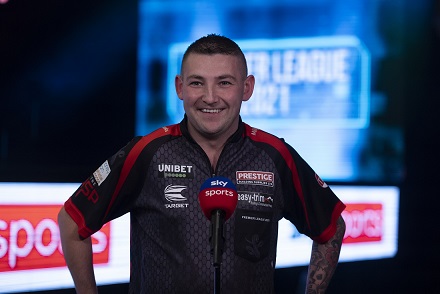 Last year's runner-up Aspinall confirmed a top four finish for the second successive year thanks to a 7-7 draw with Gary Anderson. An even contest saw both players land two ton-plus checkouts each, before Aspinall rescued a point with a 14-dart final leg to book his place in Friday's Play-Offs. 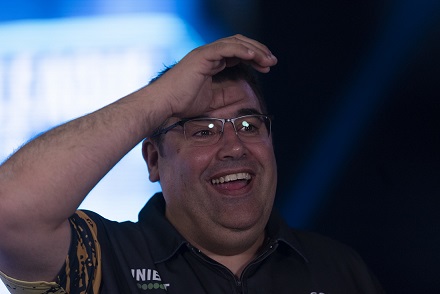 Despite going down 8-6 to Michael van Gerwen, De Sousa joins Aspinall in guaranteeing a Play-Off place in his debut season thanks to other results on the night.
Van Gerwen's clinical 62% checkout accuracy proved to be the difference between the players, with the five-time champion now on the verge of finishing top for the eighth time in nine seasons. However, De Sousa will also return for Friday's Play-Offs despite seeing his six-match unbeaten run come to an end.

"I could have done a little bit better in this game but overall I can't really complain," said Van Gerwen. "When it mattered, I did the job and that's the only thing that matters in a game that's this important. "There's still more progression but overall I can't really complain. You want to be in this position - I didn't play my best but my will to win is there. "I'm here to win the title, and I won't be satisfied with anything else." 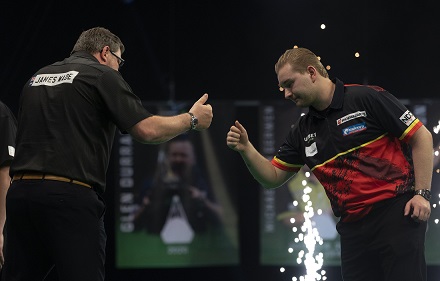 Dimitri Van den Bergh found a vital bullseye to land a 130 checkout, earning him a point against James Wade to set up a showdown with Jonny Clayton for the final Play-Off spot in Thursday's Night 16.
Coming into the game on the back of a three-match losing run, Van den Bergh had to battle back from 6-3 down to take a share of the spoils against Wade. After Wade took out 121 to go 7-6 up, Van den Bergh rallied and checked out 130 for a 15-darter under pressure to maintain his hopes of a Play-Off berth in his maiden Premier League campaign.

"This result means a lot to me, it gives me a fighting chance heading into tomorrow," said Van den Bergh. "I've been playing really well and losing recently, but you have to expect that when you are playing against the best of the best, night after night. "I always take the positives, I keep fighting and believing in myself. I have to thank the crowd for this result because they definitely helped me secure that point. "It's all to play for tomorrow night, I will need the support of the crowd to make my dream come true." 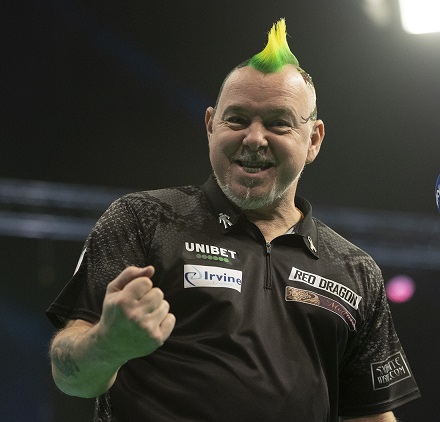 Like Van den Bergh, Clayton is seeking a Play-Off spot in his debut year but his hopes were dealt a blow as he went down 8-5 to a resurgent Peter Wright. Clayton was made to pay for his 14 missed double attempts, and the Welshman must now take at least a draw from Thursday's showdown with Van den Bergh to book a top four place, with the Belgian needing to win the tie.
Despite racking up his third straight win, Wright is out of the running for a Play-Off place due to his inferior leg difference going into the final night.

Thursday will see Clayton and Van den Bergh face-off in the crucial final game of the night, while former Premier League champions Anderson and Wade meet in the opening game. Semi-finalists Aspinall and De Sousa face-off, with the English ace looking to apply the pressure on Van Gerwen in the battle to finish as league leader, before the Dutchman and Wright meet in a repeat of the 2017 final.