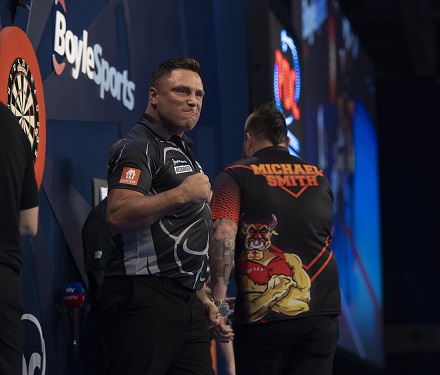 World Champion Price had been handed a tough first round assignment in the double-start tournament at the Morningside Arena against Smith, but was in fine form in a straight sets victory.
The Welshman, who won last weekend's Gibraltar Darts Trophy, landed 45% of his starting doubles and 50% of his finishing doubles in a clinical display. Smith led after taking out 126 on the bull to steal the opening leg, but Price finished 116 to level before legs of 13 and 14 legs wrapped up the first set. He also posted a 13-darter to level in set two, and the next two were also shared before three misses from Smith allowed Price in for an 81 finish to close out the win

. "I think it was a good game overall and I played pretty well," said Price. "Under pressure I'm playing some good darts. "I knew it was going to be tough, everybody's out there to beat me and I'm playing really well so I thrive in these situations. "Over the last couple of months, the doubles have been what's saving me. I flew out of the blocks, my double starting was there and I felt confident."

Price will now meet Mervyn King on Tuesday, after the 2012 runner-up won the tournament's opening tie with a straight sets defeat of debutant Martijn Kleermaker. King survived two early breaks of throw from the Dutchman to edge the opening set 3-2, and took the second 3-1 as he moved into the second round for a ninth time. 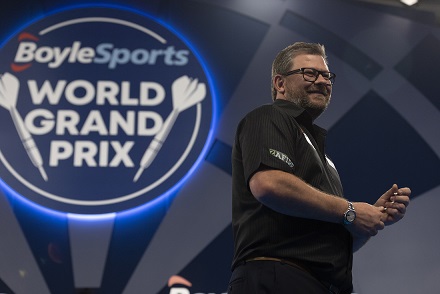 Two-time World Grand Prix champion Wade was made to work harder for his place in the last 16, coming through a tight three-set battle with Australia's Damon Heta.
Heta led 2-0 in their opening set, but failed to capitalise on that advantage as Wade hit back to level and took out 60 in the set's deciding leg. Leicester-based Heta traded 14-darters with Wade as he claimed set two by a 3-1 scoreline, and countered a 121 checkout from the left-hander with a 13-darter to level the third set. The next two legs were traded as the game move to a sudden-death leg in set three, and Wade took out another 121 finish to triumph in a hard-fought contest.

Wade's win sees the 2007 and 2010 winner reach the last 16 for only the second time in seven years, and he admitted: "I'm so happy. I've lost so many first rounds and I know I'm good enough. I should have lost again but I got bit of rub of the green, so I'm very happy." 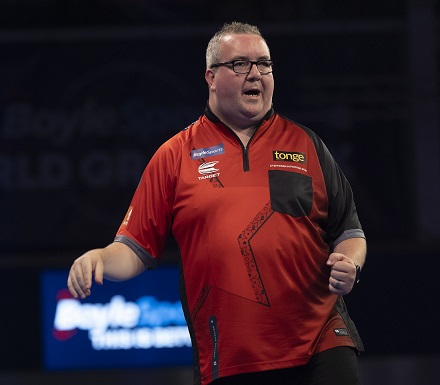 2017 champion Daryl Gurney exited this year's World Grand Prix in the first round following a brilliant 99.05 average from Bunting in his straight sets victory.
Gurney won the opening leg, but Bunting took the next three to claim the set 3-1, including a 100 finish for a 14-darter. Finishes of 104 and 113 moved Bunting 2-1 up in the second set, and he then completed the win in stunning style with a ten-dart leg, scoring 120, 180 and 177 before pinning double 12 to seal a tie with Wade on Tuesday.

"I'm so happy with the win," said Bunting. "Considering that last year I was pulled out of the event with Covid, it's really nice to get up there and play the way I can." 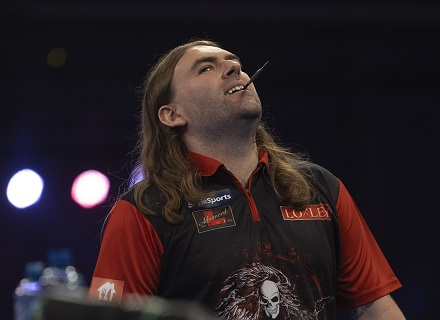 World Matchplay finalist Dimitri Van den Bergh missed four match darts in a dramatic shoot-out with Ryan Searle as the Somerset ace progressed to round two at the expense of the fifth seed.
Searle took out a sensational 150 finish to claim the game's first set, with Van den Bergh opening with an explosive 11-darter only for his rival to land two 12-dart legs in response. The Belgian fired in a 13-darter as he took the second set 3-1 and led in the third, only to see Searle move 2-1 up. Two missed match darts allowed Van den Bergh to take the tie to a sudden-death leg, but he then wasted four darts to progress as Searle made the most of his let-off to land double ten. 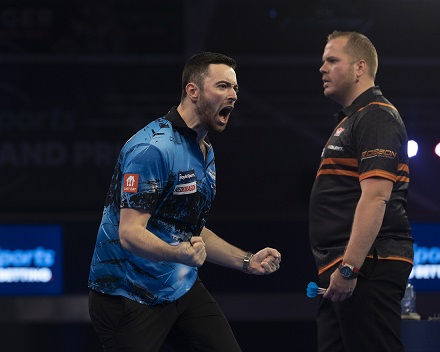 2020 runner-up Dirk van Duijvenbode was another first round casualty as he lost out 2-0 to UK Open finalist Humphries.
The former World Youth Champion capitalised on sloppy finishing from the Dutchman to lead 2-1 in the opening set and then finished 70 to claim the advantage. Van Duijvenbode took out 96 as he shared the opening four legs of the second set, but he was unable to land the bull to stay in the game as Humphries wrapped up his last 16 spot.

"I didn't feel at my best but sometimes you have to win games when you aren't at your best, and I'm happy to do that," said Humphries. "It's going well for me this year but I'm striving for bigger things and I want to push up the ladder now. "I think I'm more determined than any player out there in the world. I'm putting the effort in, I've even gone through so much detail this week to make sure I'm picking the right double to start on." 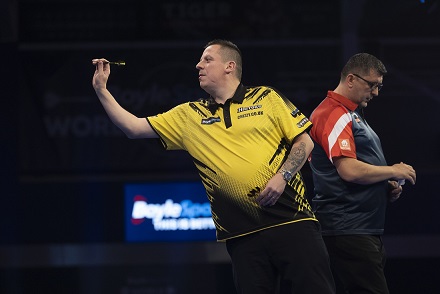 Dave Chisnall ended in-form Mensur Suljovic's hopes of reaching a third successive final by seeing off the World Cup and Gibraltar Darts Trophy runner-up in three sets.
Chisnall won the opening set 3-0 and also led in the second before a 14-darter moved Suljovic 2-1 up, and after the Englishman finished 109 it was the three-time semi-finalist who took the deciding leg to level the tie. Suljovic then took out 97 to lead in the final set, but Chisnall levelled and then moved ahead with a 13-darter before taking out 63 for victory.

"I'm very thrilled," said Chisnall. "It's always tough to play Mensur - he's been out for a few months but he's come back strong. Every first round is hard, but I've got through it."

The two-time World Grand Prix runner-up now plays Ross Smith in round two, after the debutant enjoyed a straight sets win over Joe Cullen. Smith took the first set without reply, and after sharing the second set's opening two legs he posted a 110 finish for a 12-darter and wrapped up the success with a 14-dart finish.

The first round concludes on Monday with the remaining eight ties from the first round, including five-time World Grand Prix winner Michael van Gerwen's all-Dutch tie with Danny Noppert. Former finalists Peter Wright, Gary Anderson and Brendan Dolan are also in action, alongside Premier League champion Jonny Clayton and Grand Slam of Darts champion Jose de Sousa. The tournament is being broadcast live on Sky Sports, as well as through the PDC's international broadcast partners including DAZN and RTL7, and through PDCTV for Rest of the World Subscribers.