Michael van Gerwen, Peter Wright and Gary Anderson all crashed out of the BoyleSports World Grand Prix on a dramatic Monday night in Leicester.
Three of the four seeded players in the bottom half of the draw all exited the event as the first round came to a conclusion with three World Champions being knocked out. 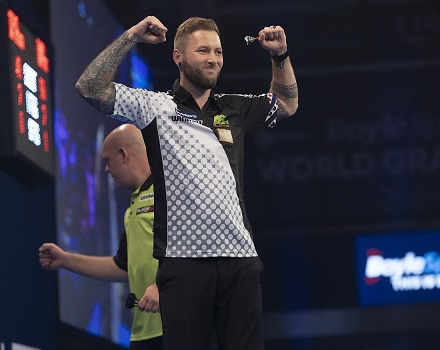 Van Gerwen lost out in the first round for only the third time in 11 World Grand Prix appearances, missing the bull for what would have been an incredible nine-darter before losing out 2-0 to Danny Noppert.
The five-time champion had led 2-1 in the first set, only for Noppert to take the next two legs and move ahead. Van Gerwen stormed out of the blocks in set two, scoring 160 and 171 to set up a potential double-start nine-darter, narrowly missing the bull for the 170 checkout. He returned to win the leg in 12 darts and took the next in 13 to lead 2-0, but Noppert won the next and capitalised on missed doubles to level in leg four with a 103 finish before taking out 90 for a 14-darter to complete a memorable win.

"I'm really happy with this win," said Noppert, who now meets Vincent van der Voort on Wednesday. "My own performance was really good. "It means a lot for me but I played well. I want to go all the way. "Last week in Gibraltar I played really well against him and it was a close game, and I've performed well in the last few weeks. "Vincent is also a good Dutch player, and I need to perform like this evening against him." 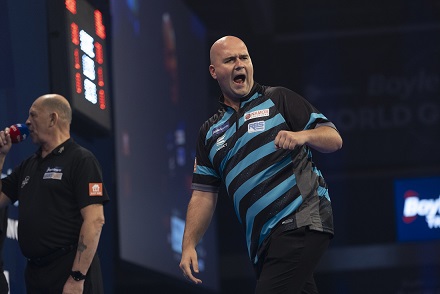 World Matchplay champion Wright, meanwhile, also lost out in straight sets as Rob Cross claimed a key win over the number two seed, reaching the last 16 for only the second time in five attempts.
Wright opened the tie with a 160 score and took out 82 for the first leg, only to see Cross win the next three to claim control of the contest. Wright shared the first four legs of the second set, but was unable to level the game as Cross stepped in to finish tops to book his second round date.

"I thought I played well," said Cross. "In a tournament that I've probably struggled with, I've got to be grateful. "I think I played better in the first set but in the second set I was a little bit sluggish. I tightened up in the second set and I've got to stop that. "Everything's good and if the confidence keeps growing, I'm back. I've got to keep myself balanced and keep working and moving forward." 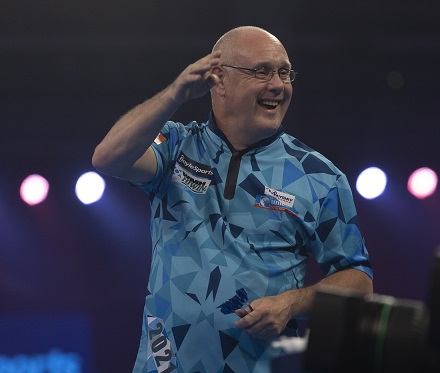 Ian White knocked out sixth seed Gary Anderson in a dramatic sudden-death leg, as the 2016 finalist missed one dart for victory in a tense finale.
White - on his return to action for the first time in two months after undergoing an operation in August - came from two legs down to win the opening set 3-2. He also led 2-1 in the second, but missed two darts to close out victory in the fourth leg as Anderson kept his hopes alive with a 14-darter and then took the decider to level the tie. An edgy final set also went all the way to a deciding leg, with White being first to a finish only to miss his chance in three visits - but when Anderson was unable to post tops he returned to finally pin double eight for victory.

"Gary's hard to play but today he missed a lot of doubles to get off and I was trying to punish him," said White. "I kept letting him in, so it's a relief just to get over that winning line. Now [the operation's] done, I feel great and my practising's going well. "It's massive. Before the [World] Matchplay I was playing darts and just worrying about the pain all the time, and I'm just so glad it's gone now." 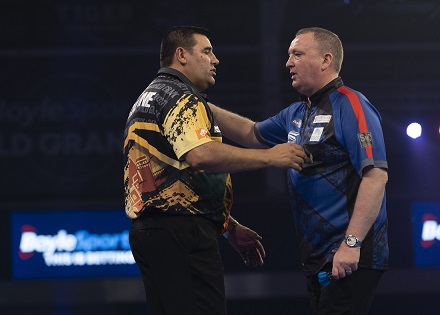 Jose de Sousa is now the only remaining seed in the bottom half of the draw, after the Grand Slam of Darts champion dropped just one leg in defeating Glen Durrant. De Sousa will now face the reigning Premier League champion, Jonny Clayton, on Wednesday after the Welsh ace celebrated his 47th birthday in style against Callan Rydz, clinically dispatching the debutant for the loss of just one leg. 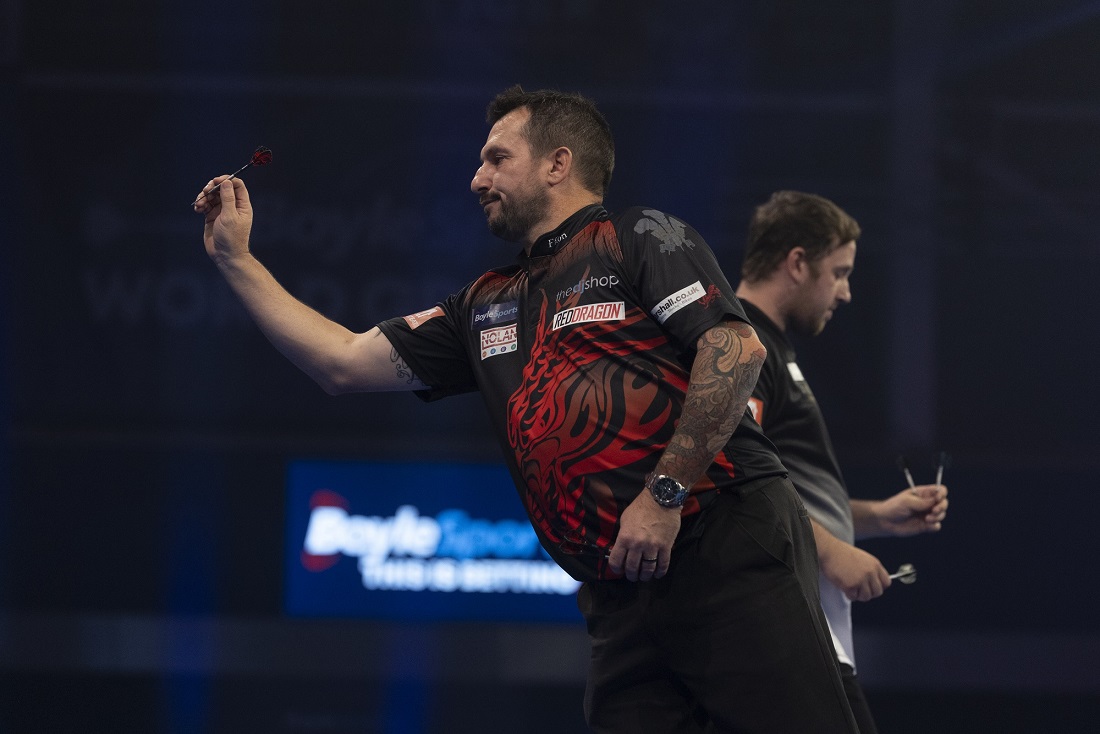 Premier League champion Clayton finished six doubles from ten attempts and also opened with half of his darts at a starting double - almost double the percentage of his opponent. Rydz shared the game's opening two legs, but Clayton won the next two to wrap up the first set and followed up a 14-darter with a roof-raising 170 finish as he claimed set two without reply to book his last 16 place.

Darius Labanauskas enjoyed a winning debut in the double-start event with a 2-1 defeat of 2011 finalist Brendan Dolan to set up a last 16 meeting with White. The Lithuanian came from 2-0 down to win the first set with three straight legs, only for Dolan to post an 88 checkout and a 13-darter as he won the second without reply to level. Labanauskas, though, was on hand to win the third with three straight legs - including a 14-darter to break throw - as he celebrated a milestone in his career. 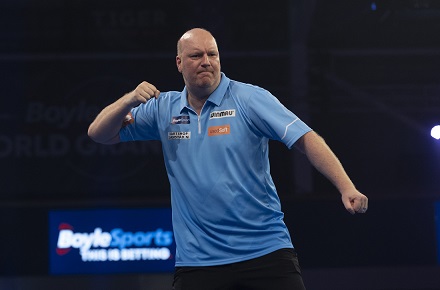 Van der Voort claimed an impressive straight sets win over Gabriel Clemens to book his second round spot in style in Leicester.
The Dutchman found himself 2-1 down in set one following a strong start from Clemens, who finished 96 to break in leg three only to see Van der Voort take out 104 for a 14-darter to level and 82 to win the set's deciding leg. Clemens led 2-0 in set two, but Van der Voort finished tops and double five to level before checking out 61 to complete the win.

Krzysztof Ratajski enjoyed his first win in three attempts in the double-start format, coming from a set down to defeat Nathan Aspinall 2-1.
Aspinall had come from a leg down to land back-to-back 14-darters as he won the opening set in a deciding leg, only for Ratajski to land three 14-darters of his own as he took the second in the same manner. Aspinall shared the first two legs of the third, but paid for one missed double in leg three as Ratajski moved 2-1 up before capitalising on 11 missed starting doubles from his opponent to create a round two meeting with Cross.