Dave Chisnall produced a sensational comeback from two sets down to defeat Ross Smith in the BoyleSports World Grand Prix on Tuesday, as reigning champion Gerwyn Price overcame a second round scare in Leicester. 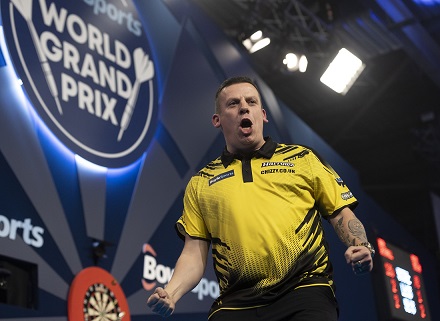 Two-time World Grand Prix finalist Chisnall looked set to become a sixth seeded player to exit this year's event when rising star Smith won six of the opening seven legs in their tie.
However, Chisnall mounted a rousing fightback to claw his way back into the contest before taking out a superb 135 finish to seal his place in the quarter-finals. Smith made an exceptional start, following up a 14-darter to break throw with a 152 checkout to seal the opening set without reply, and he took the second set 3-1 to double his lead. The pair traded 13-darters to open the third set, but Chisnall pounced to break throw on tops in leg three and then finished a brilliant 12-darter with an 88 checkout to kick-start his challenge. Chisnall then came from a leg down to win the fourth set 3-1, hitting another 12-darter in the process, to send the tie into a decisive fifth set. Smith again held the advantage, after finishing 52, but Chisnall took out 130 on the bull to level, double nine to break and then 135 to complete a memorable recovery.

"I'll never give up and I keep fighting," said Chisnall. "When I was 2-0 down I thought I was going to get bashed 3-0 because I wasn't playing well at all, and I just kicked in a gear. "I started hitting the 180s and I felt good. I had to hit the 135 because he would have had a shot, so I'm over the moon to get the win." 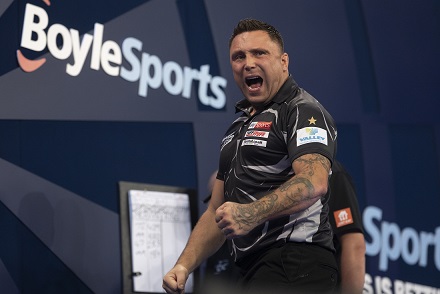 Chisnall now renews his rivalry with Price in a tasty quarter-final on Thursday - with the Welshman having edged a thrilling seven-set semi-final 12 months ago.
Price, though, had to endure some nervy moments early in his second round tie with Mervyn King before coming from a set down to win 3-1, avoiding the fate of title rivals Peter Wright, Michael van Gerwen and Gary Anderson - who all crashed out on Monday night.
The Welshman opened his tie with King with a 116 finish and also landed seven perfect darts during the first set, only for the 2012 finalist to reel off three straight legs to take a shock lead. Price hit back strongly with legs of 14 and 13 darts in taking set two by a 3-1 scoreline, and repeated those finishes as he edged the third 3-2. King's gutsy challenge continued as he led in set four, but Price stopped the fightback in its tracks with a timely 14-darter, landed double ten to move 2-1 up and then posted tops to ensure his quarter-final place.

"I thought I played particularly well for most of the game but made a couple of slip-ups, and the main thing is that I won," said Price. "When I lost the first set I was beating myself up, and I should learn not to do that because I was playing pretty well at the beginning. "I think Merv pinched the first set and that really hurt me. I had to dig deep and it wasn't the best performance and I need to improve on that game." 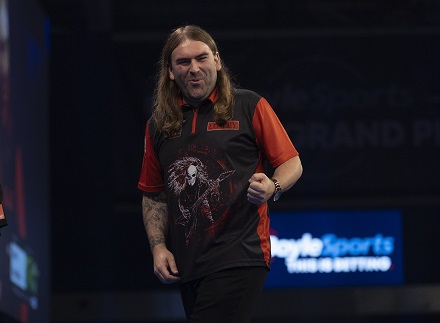 Ryan Searle won through to his maiden televised quarter-final with a classy 3-1 defeat of Luke Humphries to open the BoyleSports World Grand Prix second round. Somerset's Searle produced some superb doubling during a fast-paced contest, opening with over 56 percent of his attempts at the outer ring and landing three ton-plus finishes to progress to the last eight in Leicester.
Humphries hit back from 2-0 down with the aid of an 11-darter to level in set one, but missed two darts at double 19 to claim the opener as Searle returned on tops to take the advantage. Searle then doubled his lead by winning a brilliant second set without reply, taking out finishes of 140 and 152 for successive 12-dart legs along the way. Humphries hit back to keep his hopes alive in set three, defying an opening 160 score from Searle in the deciding leg to complete a 14-darter and pull back to 2-1 in the match. Searle followed a 93 finish with a sensational 170 checkout to move 2-0 up in the fourth set, with Humphries taking out 112 and 65 to force another deciding leg - but the UK Open finalist was unable to finish 100 with six darts and his rival stepped in on tops for victory.

"I enjoyed that - it was a great game," admitted Searle. "That's the way darts should be played, fair play to Luke and I believe in the future that me and him are going to be battling it out a little more. "I feel like now I'm a different animal than I used to be, I'm more focused and I'm looking forward to the next round now. I can't wait to get up on stage again." 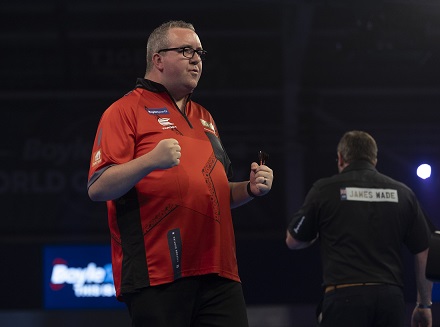 Stephen Bunting reached his first World Grand Prix quarter-final since his debut seven years ago with a 3-1 defeat of James Wade, ending the left-hander's bid to claim a third double-start title. Bunting followed up his impressive first round defeat of Daryl Gurney with another clinical performance, finishing almost 50 percent of his doubles and limiting Wade to just four legs.
The 2014 semi-finalist won the opening set without reply, landing a crowd-pleasing 132 checkout on the way, and responded to a Wade 11-darter with a 14-darter and a 107 finish to lead 2-1 in the second. Wade, though, levelled and took the set's decider with a 14-darter to square the contest, only to see Bunting pull clear by winning six of the next seven legs - including a 102 finish to secure set three - as he wrapped up the win.

"I'm happy with the win and I really enjoyed it," said Bunting, who now faces Searle on Thursday. "The last two people I've beaten have won the event. "There were a lot of aspects of that game that I didn't feel really comfortable with, but when you beat James Wade you've got to be happy - he's such a great double-in, double-out player. "Over the last 18 months since I've had my new darts, my scoring has been phenomenal. My first round was pretty special and my scoring was very good again tonight. "The last few years have not been easy, but I actually feel like I'm playing better than I've ever played and I'm walking up to the oche like I can win again, and that's a perfect feeling for me."

The second round concludes on Wednesday with the remaining four ties, with Jose de Sousa being the only seeded player remaining in the bottom half of the draw as he takes on Jonny Clayton in a rematch of May's Premier League final.
Former World Champion Rob Cross meets Krzysztof Ratajski, Danny Noppert and Vincent van der Voort meet in an all-Dutch clash and Ian White takes on Lithuania's Darius Labanauskas.