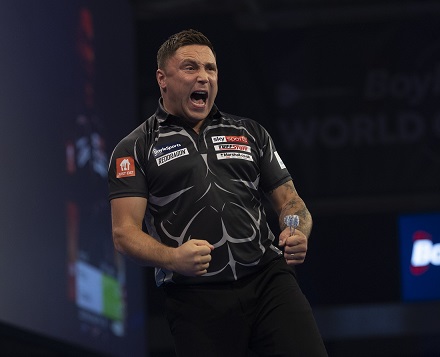 World Champion and world number one Price showed his class in the double-start format by missing just two of 14 darts to open legs against Chisnall at Leicester's Morningside Arena. Two-time finalist Chisnall had pushed Price all the way in the 2020 semi-finals, but could not repeat that form with his finishing doubles as 17 misses allowed the Welshman to comfortably move into the last four.
Price won the opening five legs without reply before Chisnall took out 118 for a 12-darter to get off the mark in the second set and then levelled on double ten. Price, however, took the set with a key 104 checkout, and then came from a leg down to win three straight legs in the third - including a 100 finish - to wrap up a dominant display.

"There's a lot more in the tank for me," admitted Price. "It was a difficult game with the crowd against me but I won. "I just want to keep winning - give me an opportunity and I'll take it." 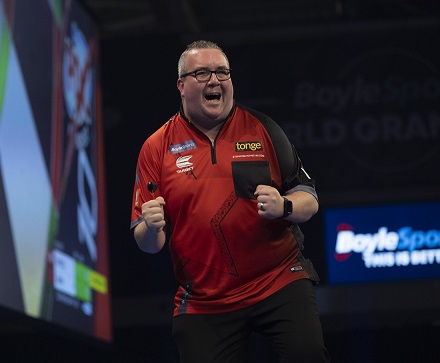 Price will now face Bunting in Friday's semi-finals in a repeat of their meeting at the last four stage of the World Championship nine months ago, after the St Helens ace defeated Ryan Searle 3-1.
Searle pounced on six missed finishing doubles from Bunting to win the first set 3-1, only to see the 2014 semi-finalist take the second by the same scoreline.
Searle led 2-0 in set three, but Bunting took out 104 to stay in the hunt and then capitalised when his rival missed six set darts in leg four, before opening the deciding leg with a 160 score and finishing 82 in two darts to move 2-1 up in the tie. Searle landed a 13-darter to lead in the fourth set and was also 2-1 up before Bunting took out 101 for a 12-darter to level and punished another slip-up by the Somerset ace to close out the win.

"I dug really deep there," said Bunting. "You can't give Ryan chances - I know how good he can be, he's a special player and he's going to do big things in this game. "I feel drained after that game. I knew it was going to be tough against Ryan so I'm delighted to be through. "Three years ago I was ready to walk away from the game and now I'm in my second TV semi-final of the year."
Bunting is now appearing in his second World Grand Prix semi-final, seven years after losing out to Michael van Gerwen on his debut in the event.
Looking forward to his tie with Price, he added: "What a player - number one in the world and I've got it all to do. "If I turn up like that, I'll be getting the next train home. I know what I need to do; I'll turn up tomorrow with all the confidence in the world. "I'm playing some good darts, I need to try and get rid of the nerves because they're creeping into my game and making it more difficult for me. You know Gerwyn's not going to miss, so I can't afford to." 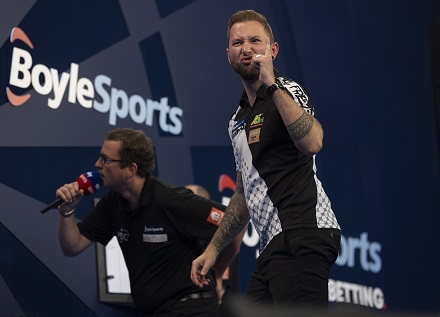 Friday's other semi-final will see Dutch ace Noppert take on Premier League champion Jonny Clayton, after they defeated Ian White and Krzysztof Ratajski respectively.
Noppert's dream run continued with an outstanding 3-1 win over White in Thursday's opening quarter-final. Noppert has knocked out fellow Dutchman Michael van Gerwen and Vincent van der Voort already this week in Leicester, and this time denied White a first semi-final in the double-start format with a sensational display on the outer ring.
Noppert opened with almost 50 percent of his darts at a starting double, and finished 11 attempts from 21 as he averaged an impressive 95.57. The Dutchman won the opening set without reply, punishing five missed doubles to break White's throw in leg two. Noppert hit back from two legs down to level in the second set, but White held his nerve with an 81 finish as he squared the tie with a 12-darter. The third set also went to a decider, after White finished a pressure 104 in the fourth leg, as Noppert regained the advantage in the tie with a fine 14-darter. Noppert then opened the fourth set with a 116 finish for a 12-darter, and took out 86 in leg four to book his place in only a third PDC televised semi-final.

"I can't believe I'm in the semi-finals," admitted Noppert. "I played brilliant this game and I'm really happy with my own performance. "My finishing is going well, this crowd is amazing. My performances are really steady this week so far, and I think this is the best I have played on stage. "Years ago my performance was not good on stage, but now it is." 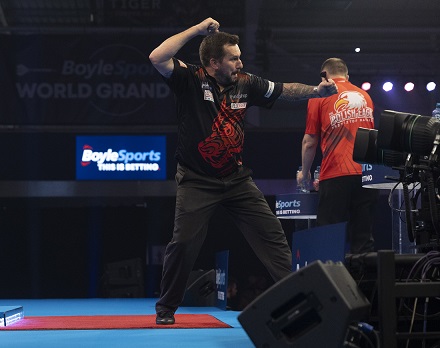 Clayton's bid to win a first televised ranking title will continue into the semi-finals, after he defeated Ratajski 3-2 in a thriller. The Welshman has won the World Cup, Masters and Premier League in the last year, and showed his battling qualities with another strong display at the Morningside Arena.
He has defeated Callan Rydz and Jose de Sousa already this week, and lifted his game against the Polish number one by opening with 58 percent of his starting doubles and finishing 68 percent of his darts to win legs. However, he had to overcome a blip in the second set's deciding leg - when he burst his score when needing 134 - before coming from 2-1 down to claim six of the final seven legs and a spot in the semis.
Clayton started brightly by winning the opening set by a 3-1 margin, while he landed a 150 finish in the second only for Ratajski to follow checkouts of 93 and 113 by capitalising on his rival's slip-up in the decider. The Polish star landed a 12-darter to open set three, and defied a 13-dart leg from Clayton to take the deciding leg on double eight to move 2-1 up in the tie. Legs of 15, 13 and 15 darts gave Clayton set four, and the Premier League champion maintained that momentum during the final set with finishes of 47 and 69 before closing out the win on double eight.

"I got there in the end," admitted Clayton, who now plays Noppert on Friday night. "I'm happy to be in the semi-finals and I'd love to win this. "I'm playing well but I couldn't relax. A few mistakes made it really hard but I had a class player against me. "The pressure of these matches is immense - Krzysztof is a fantastic player and he put the pressure on me."
Friday's semi-finals at a sold-out Morningside Arena will commence at 1900 BST, with the format extended to the best of seven sets.