Reigning BoyleSports World Grand Prix champion Gerwyn Price came from two sets down against Stephen Bunting to set up an all-Welsh final against Jonny Clayton on a dramatic semi-finals night in Leicester on Friday.

World Champion and world number one Price seemed on course to crash out at the last four stage when Bunting claimed six of the first nine legs to open up a two-set lead. Price, though, clawed his way back into the tie and eventually claimed four straight legs to keep alive his bid to retain the title.
He will now face his 2020 World Cup-winning team-mate Clayton in the final, after the Premier League champion claimed a 4-1 win over Danny Noppert in their last four clash. 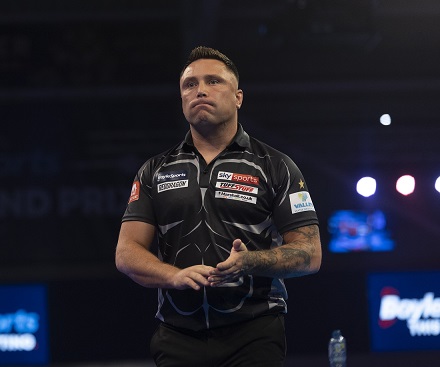 Bunting made the stronger start to the tie with Price by winning the first two legs without reply and going on to win the opening set 3-1 with an 80 checkout. Price led 2-1 in the second set, but Bunting levelled and then punished the reigning champion for a miss at tops for the set to double his advantage. Bunting also led 1-0 and 2-1 in set three after posting legs of 14 and 13 darts, but Price levelled the set in five visits and then took out 74 to win the decider and kick-start his comeback. Price then finished 60, 78 and 79 as he took set four by a 3-1 margin to square the contest, and hit two 12-darters as he won the fifth set 3-2 to lead for the first time. Missed doubles from Bunting proved costly in the sixth set's opener, before legs of 13 and 14 darts from Price completed his gritty comeback.

"It's probably one of the worst performances that I've had, that was tough," reflected Price, who averaged 89 but finished 54% of his finishes. "I was under a lot of pressure and the crowd were on my back. It was tough at moments up there. "I thought I was probably going to lose that game, I wasn't playing well, the crowd were against me, Stephen was playing brilliant early on. "I just dug in there and found some decent darts, but nowhere near what I can play. I'm happy that I won."
Price had an extended break after the second set, admitting that he was enduring some pain in the elbow which had forced his withdrawal from the Nordic Darts Masters last month as well as giving himself an off-stage pep-talk.
"I had a little bit of trouble with my arm but it was fine after that," he added. "I was just looking at myself, I just needed an extra bit of time. "At 2-0 down, I probably should have been one-all and I was basically down and out. I had to give myself a kick up the backside. "I was just plodding along, trying to scrape legs and I wasn't playing particularly well, but I just dug in there until the end and thankfully got over the winning line." 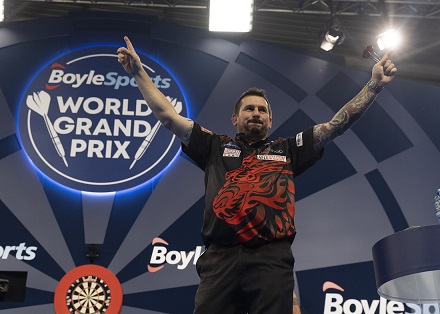 Clayton had earlier won his place in a first World Grand Prix final by defeating Noppert 4-1 to end the Dutchman's hopes in the double-start event.
Noppert has enjoyed a memorable week to reach the last four - including a win over Michael van Gerwen - but was unable to match Clayton's clinical finishing, despite recording marginally better starting double statistics. Clayton ultimately proved too accurate on the outer ring at the end of legs, finishing 41 percent of his darts to win legs as he pulled clear to reach the final.
Clayton came from a leg down to win the first set 3-1, finishing an 11-darter and a 108 checkout in the process, before Noppert traded 13-darters with the Welshman in taking the second set by the same margin. The Premier League champion won the third set 3-1, despite a 107 finish from Noppert, and then came from two legs down to win the fourth in a deciding leg, before taking out 112 in three straight legs to take the next set and seal a spot in the final.

"It's just an awesome feeling, I'm over the moon," said Clayton. "I came here tonight to reach the final and I've done it - it's absolutely fantastic for me. "Danny is a fantastic player and a great guy. He was 2-0 up in the fourth set, I came back and nicked that one and I think that's what made the difference. "I'm looking forward to the final, let's see what happens tomorrow."

Price is the 4/7 favourite with sponsors BoyleSports to retain the title on Saturday night, with Clayton the 11/8 outsider going into the sell-out final in Leicester.
"Jonny's played fantastic all tournament and played brilliant today," said Price. "It's going to be a tough game tomorrow but hopefully I can play a lot better than I did today, because I need to."