Welsh wonder Jonny Clayton triumphed in the BoyleSports World Grand Prix, producing a remarkable doubling display in a 5-1 win over Gerwyn Price in Leicester on Saturday.

Clayton scooped the 110,000 pound top prize and a first televised ranking title by shattering Price's hopes of retaining the double-start title with one of the best performances of his career.
Clayton - who partnered Price to World Cup glory in 2020 and has since won The Masters and the Premier League - finished 170, 164, 152 and 110 before sealing glory with a 116 checkout. He also started with 63 percent of his darts at a double - compared to Price's 40 percent on the night - and averaged 94 for both the final and the tournament as he impressively scooped the title. 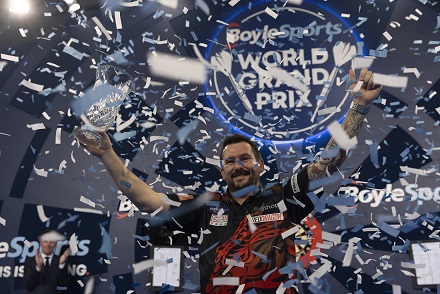 "It's what dreams are made of," admitted Clayton, who moves up to seventh on the PDC Order of Merit. "We all play to win a big major, it's my first ranked major and I'm over the moon, chuffed to bits. It's been a long week, but to play the world number one and beat him is fantastic. "I'm lost for words. To win this and play really, really well is a tick in my box and I'm going to smile for a couple of weeks! "I came out of the blocks quicker than Gezzy. The respect I've got for Gerwyn is second to none, he's a fantastic player and a fantastic guy, and the crowd tonight let us play. We both enjoyed it. "He's smashed me the last six or seven times so it's nice to have one back on him. My starting was fantastic, so I think I kept my pressure onto Gezzy and that was the difference." 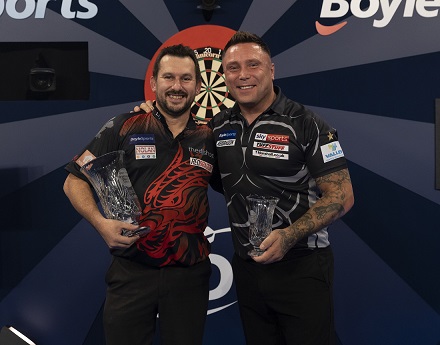 Price had begun the final with an opening 160 score and won the first leg with a 14-darter, but could do little to prevent Clayton winning the next three - including a 12-dart leg - to snatch the opening set. A fine second set saw Clayton move 2-0 up before Price followed an 11-darter with double ten to level, only for the Pontyberem ace to take the decider in 14 darts. The third set saw the standard rise again, with Price once more winning the opener only to see Clayton take out 170 and 164 for back-to-back 12-darters as he moved 2-0 up. Price finished 72 to level, but the deciding leg once again went the way of Clayton as a 13-darter gave him a huge three-set lead.
Clayton also opened up a 2-0 cushion in set four, but Price finished double ten in the next two to level and capitalised on a missed bull from his opponent to steal the set on tops and pull back to 3-1 in the game. Clayton capitalised when Price missed his opening three darts at a double in the first two legs of the fifth set, as double eight and a 12-darter pushed him ahead. Four missed finishing doubles from Clayton allowed Price to take the third leg, but a 110 checkout gave the Premier League champion a fourth set.
Clayton broke in the opening leg of set six, and took out a sensational 152 checkout - after also opening with a 152 score in his second visit of the leg - to move 2-0 up and to the brink of glory. Price finished 102 to hit back in leg three, but Clayton quickly ended any hopes of a fightback as a fifth ton-plus checkout of the final, with a 116 combination, completed a glorious win. 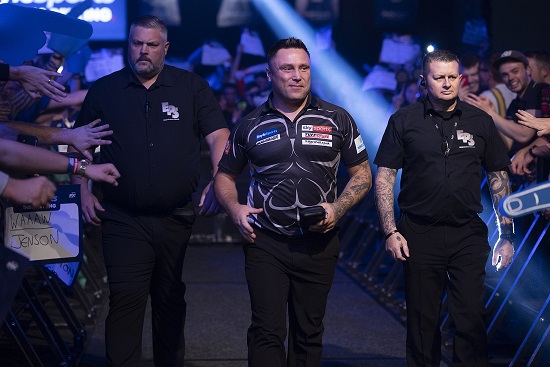 "He was too strong for me today," admitted Price. "He didn't miss a double early on to get off, I missed a couple but he was phenomenal. "I did have a chance but I didn't take them a couple of times and he was winning the big moments. He was starting off a lot better than me. "Apart from the first game that's the best I've played in the tournament and that's a testament to Jonny. He was by far the better player on the night, but I'll get him next time. "I had a great final and I appreciate the crowd for letting us play."