Dimitri Van den Bergh's bid to retain the Betfred World Matchplay title will continue with a semi-final against Krzysztof Ratajski on Saturday after the Belgian's brilliant victory over Gerwyn Price.
The reigning champion produced a superb display to see off World Champion Price 16-9 on Thursday night as the quarter-finals began in style at Blackpool's Winter Gardens.
He is joined in the last four by Polish number one Ratajski, who reached his first PDC televised semi-final with a 16-8 success against youngster Callan Rydz. 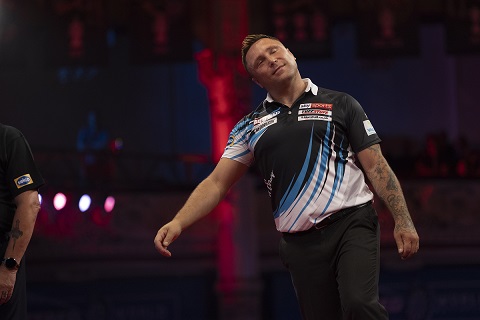 It was Van den Bergh, though, who stole the show once again to continue his bid to retain the Phil Taylor Trophy.
Having hit a remarkable 14 180s in his second round win over Dave Chisnall, Van den Bergh landed ten further maximums and averaged over 102 against the reigning World Champion. Price played his part in an enthralling contest and pulled back from 6-2 down to trail just 8-7 at one stage, only to see Van den Bergh win eight of the next ten legs in a famous win.
Price began the game with a 105 finish and led 2-1, only to miss doubles in four successive legs as Van den Bergh capitalised on each occasion and then took a fifth straight leg to move 6-2 up. A brace of tops finishes saw Price halve the deficit, before Van den Bergh regained the advantage with legs of 11 and 14 darts. Price, though, produced two 14-darters of his own in a three-leg burst to cut the gap to 8-7, celebrating with a copy of Van den Bergh's signature dance going into the game's third break. The pair traded 13-darters before the Belgian pulled clear with six straight legs, including three breaks of throw, a 12-darter and a 90 finish on the bull, before taking out 68 to seal his semi-final spot. 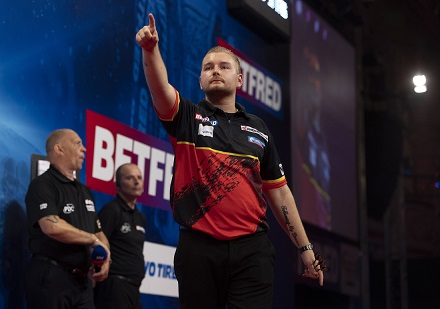 "I loved it, the crowd were brilliant and I'm so happy to have won that game," said Van den Bergh. "I'm ecstatic and I think I was the deserved winner. "Gerwyn's the World Champion and world number one and it's incredible to be playing against him - I like him, he's a great man and I have a lot of respect for him. "He was trying everything but I couldn't let him get into my head. I gave him space and I focused on myself. I had to show a lot of mental strength again. "My emotions were like a rollercoaster and I'm extremely proud. "I fought hard and never gave up, and I knew that's what I had to do against a player like Gerwyn, and it's unbelievable to beat him 16-9. "It's going to be a big battle on Saturday but I know how good Ratajski is and he showed it again today. He's fantastic and I've got to be focused and believe in myself. "It would be unbelievable to be one of those players who defends this title but I've got to keep my feet on the ground." 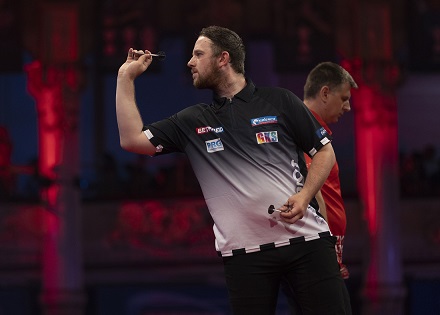 Earlier in the night, relentless Ratajski won through to his first televised PDC semi-final in convincing fashion against Rydz.
The Polish ace has reached the last eight at the World Matchplay, World Championship and UK Open in the past year, but ensured a spot in Saturday's semi-finals in style. Debutant Rydz had seen off Glen Durrant and Rob Cross to reach his first televised quarter-final, but never recovered after seeing his opponent open up leads of 3-1, 6-2 and 12-5. Rydz had punished three misses from the Polish number one to win the game's opening leg, but was unable to repeat the clinical finishing of his second round win over Cross as Ratajski pulled away. The 13th seed finished 116 in leg six, an 11-darter in leg 12 and a 105 checkout in the 14th, as he created a seven-leg cushion at 12-5. Rydz landed tops in two of the next three to hit back, but another 11-darter and a 141 finish from Ratajski proved a hammer blow to the youngster's comeback hopes before the Polish star closed out a big win on double eight. 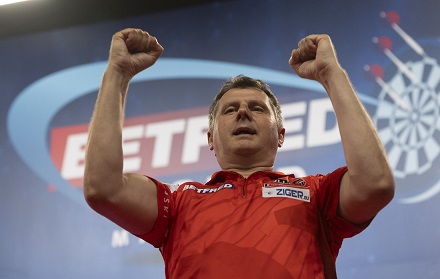 "I'm really happy and I feel great," said Ratajski. "It's really something big for me. "My experience was very important - every match on this stage is big and I expected a hard match but Callan was not in his best form. "I felt comfortable on stage and my average was quite good, especially with so many misses at doubles. "Every player dreams of winning this trophy so I hope I can play the semi-finals with less mistakes and do better on my doubles. It will be the biggest match of my career."