Peter Wright and Michael van Gerwen will clash in the Betfred World Matchplay semi-finals after seeing off Michael Smith and Nathan Aspinall respectively on Friday night.

The second and third seeds will do battle for a spot in the final after enjoying big wins in their quarter-final ties in front of a sell-out Winter Gardens crowd. 2017 runner-up Wright swept aside Smith 16-7, averaging over 100 in a strong performance to continue his bid to claim the Phil Taylor Trophy for a first time.
Van Gerwen, meanwhile, battled to a 16-9 win over Nathan Aspinall, progressing through a contest in which both players each missed 27 darts at a double. 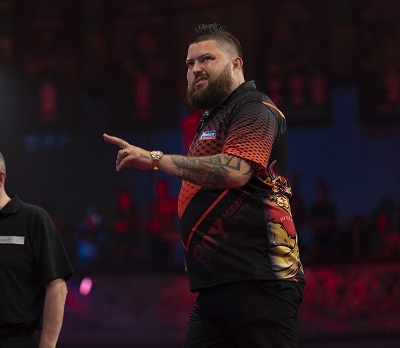 2017 runner-up Wright produced a brutal seven-leg mid-game burst to pull away from 6-4 to 13-4 as he continued his bid to lift the Phil Taylor Trophy for a first time.
Smith hit back from 2-0 down to level with an 88 finish and an 11-darter, but Wright claimed three in a row to move 5-2 up before finding top gear. Smith had pulled back to 6-4, but had no answer to a barrage from the 2020 World Champion as Wright pulled away with seven straight legs which included an 11-darter and three 13-dart finishes. Smith finished 81, 84 and tops as he pulled back to 13-7 and threatened a comeback, but Wright restored breathing space on double eight and hit successive 14-darters to wrap up the win. 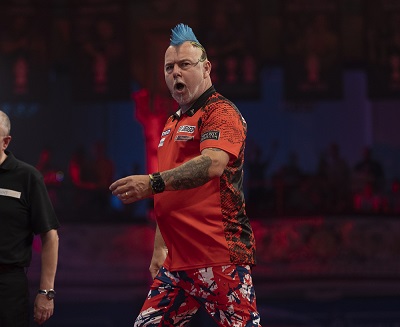 "I'm really happy to be through," said Wright. "It was enjoyable and we both respected each other up there. "I didn't feel totally comfortable tonight. I thought I played not bad, but I felt I'd produce more because I prepared really well. "I didn't hit as many 180s as I thought I would and my doubles weren't great either, but it's a win and I'm into the semi-finals. "Michael has the ability to be a World Champion and world number one in the future, but he didn't play anywhere near his game tonight. "Mentally and physically I'm in the best place ever and I'm looking forward to the semi-final. Everybody wants to win this one and it would be amazing if I could do that." 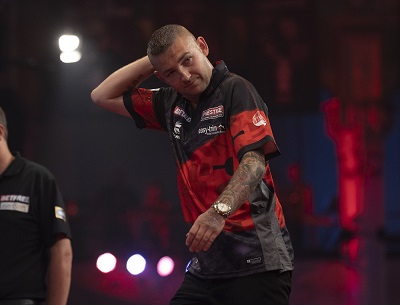 The night's second quarter-final began in style as Van Gerwen and Aspinall opened the tie with a 180 each, raising the anticipation for a classic which failed to materialise.
Aspinall took the opener on double eight, but it proved to be the only time the former UK Open champion would lead as Van Gerwen took the next three to move ahead. The Dutchman also took out 110 as he opened up a 5-2 cushion, with Aspinall cutting the gap to one leg with a match-high 130 bull finish only to see Van Gerwen pull away. The two-time Winter Gardens champion accelerated into an 11-5 lead, and also led 13-7 before Aspinall finished double eight and a 13-darter to kick-start his challenge. Van Gerwen, though, stopped the fightback in its tracks with a 12-darter before powering in legs of 13 and 11 darts to seal the win. 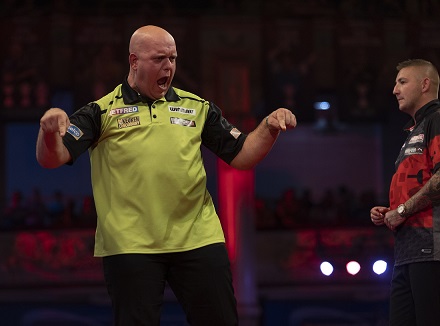 "It wasn't my best performance but at least I won," said Van Gerwen. "It wasn't good but the most important thing is that I won the game. "We were both struggling and trying too hard here and there, and it was tough for both of us but I made the most of it at the end. "Last year at this stage I could have lost this game but I won this time. My mindset is improved and I got through it. "I know I have to improve tomorrow but at the end of the day it's all about winning the game and I'm so glad I did that. "There's still more in the tank and I have to show that tomorrow. I missed a lot of doubles and my scoring power wasn't as good as I wanted. "Tomorrow's another really important day, this is history now and tomorrow's the future."
Saturday sees the eagerly-awaited semi-finals take place, opened by reigning champion Dimitri Van den Bergh's tie with Krzysztof Ratajski, before Wright and Van Gerwen resume their big-stage rivalry.
"It's going to be a lovely battle because we're both phenomenal players who don't want to lose to each other," added Van Gerwen. "It's going to be fantastic and we know what we're both capable of so I have to do the right things to make it difficult for him. He's playing really good darts but he hasn't played me yet."