World number two Wright was left in tears of joy after defeating old rival Michael van Gerwen 17-10, while Van den Bergh too was left emotional after coming from behind to defeat Krzysztof Ratajski 17-9. 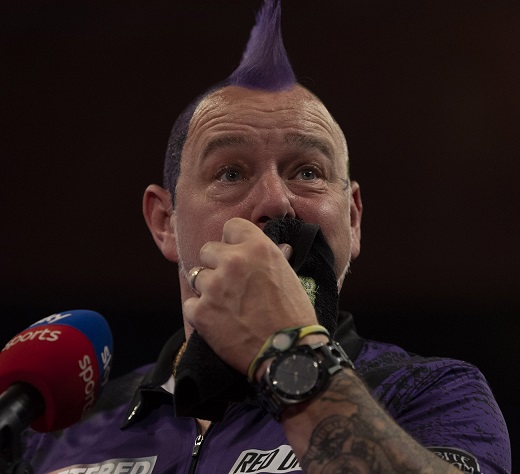 An outstanding display from Wright saw him average 110.37, the highest ever recorded in a World Matchplay semi-final, to reach his second Blackpool final.
A hotly-anticipated clash between Wright and Van Gerwen began with the Scot racing in to a 4-1 lead at the first break averaging 113. The next mini-session was closer, with Van Gerwen taking it 3-2 to trail by just two legs despite a gap of over ten points in the averages. Wright then stunned the packed Winter Garden's crowd in leg twelve as he hit eight perfect darts before missing double 12 for a nine-dart leg, as he eventually went on to break again and take an 8-4 lead. The 51-year-old, whose in-play average rose to over 114, punished Van Gerwen for missing a single dart at the bullseye by taking out 98 in two to move six clear of the Dutchman, completing a sequence of ten, 11 and 11-dart legs. Van Gerwen then took out 127 to keep the pressure on Wright before another break of throw saw the Dutchman close the gap to three with the score at 10-7. Van Gerwen finished the 20th leg on double 12 to highlight that there was still a contest on, moving to within two of his opponent, with his match average up to 106. An incredible 149 finish from Wright, with Van Gerwen sat on 100, gave him a crucial hold of throw to extend the advantage once more and edge closer to the finish line. More champagne checkouts were to come, as Wright pinned the bullseye for a 121 finish to break throw and move to within three legs of the finish line, before taking the final three legs to win it in style. 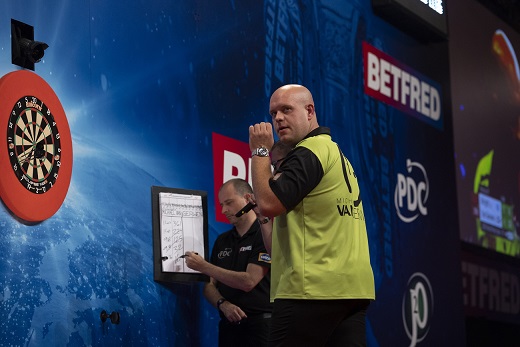 "It was tears of joy at the end because Jo [Wright's wife] will be here tomorrow," Wright explained. "She's done an amazing job - she had her operation last Thursday and came straight to Blackpool so that she could do my hair. "I told her that she had to stay home and rest but she wanted to come. I'd promised her that she could come to the final if I got there. "I thought he played really well there and it felt like an amazing game. You know Michael can reel off legs and he did that, but I had to ride that burst of fantastic legs. "Michael's the best player in the world and we all know it. For me to be favourite against him shows how well I've been playing and my darts have backed that up. It's probably one of my best performances. "I've dreamed about winning this and picking up that trophy, and now I'm one game away from achieving that dream." 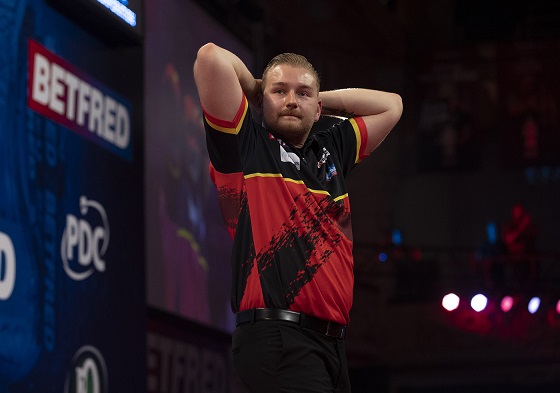 The opening game of an electric night saw Van den Bergh recover from a slow start to see off Ratajski.
Polish number one Ratajski got off to a strong start, racing in to a 3-0 lead with Van den Bergh struggling to score. Leg eight saw Ratajski punish the defending champion further, pinning tops for a 94 finish to break again and lead 6-2. Van den Bergh then broke back immediately to close the gap, before a hold of throw saw Ratajski's lead cut to two legs as the players left the stage for the second break. After the interval, Van den Bergh took advantage of a rare miss by Ratajski, hitting double eight to break once more and reduce the deficit to just one leg. A fifth leg in a row and a further break of throw then put Van den Bergh ahead for the first time, with his opponent beginning to miss chances to win legs. A 128 finish then doubled the Belgian's advantage before Ratajski missed a handful of darts, allowing the 27-year-old to win a seventh leg on the spin and take a step closer to a second Matchplay final in as many years. The 17th leg saw Ratajski stop the rot as he went on to win the next three legs and close the gap to one, before a 110 finish from Van den Bergh took the score to 10-8 in his favour. The match concluded with the defending champion winning seven of the next eight legs punishing Ratajski for hitting just nine of his 35 shots at double and take his place in Sunday's showpiece final. 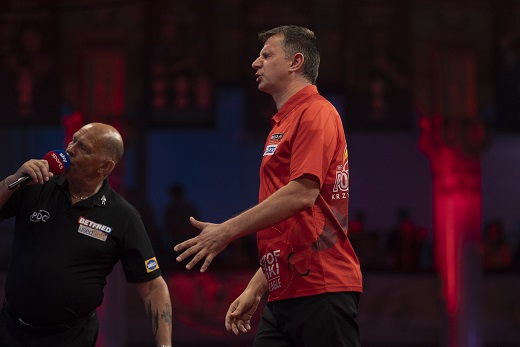 "I'm ecstatic, with the way the game started, I needed the crowd," admitted an emotional Van den Bergh. "Krzysztof missed some doubles and I battled back and took my chances, but even when I got in front I didn't feel in control - but I'm in the final now."
The defending champion also credited the return of a sell-out crowd for his victory, adding:
"The crowd knocked me off my feet tonight - it was such a feeling and I can only thank them. "It would be a dream come true to be the back-to-back World Matchplay champion. "I've done it before with the World Youth Championship and to have the chance to win this in front of a crowd is a dream. I want to give the crowd a fantastic game, and I would love to lift the trophy again."