World number two Wright had lost in the Winter Gardens final four years ago, but this time lifted the trophy named in honour of his conqueror in 2017 - Phil Taylor - to cap a memorable tournament.
Wright had won through to the final with a stunning defeat of Michael van Gerwen in the semi-finals, and treated a capacity Winter Gardens crowd to another superb performance in the final. 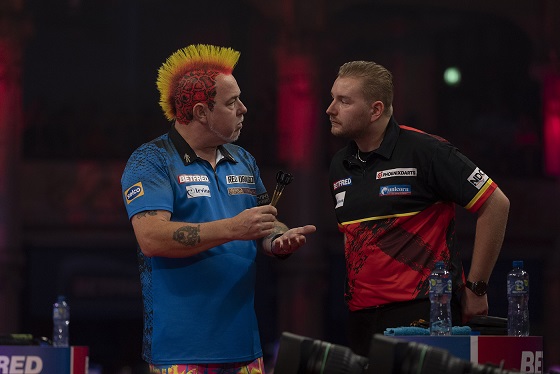 "That one was for Jo [Wright's wife],"said an emotional Wright. "She's been through a lot over the last year or so, but she insisted she would be here for the final. "I've backed up what I said to everyone a month back. "A lot of players have commentated saying I should leave the talking to my darts and that's what I've done. "I used to watch the World Matchplay as a kid and now my name is on the trophy forever and that's special. "It was amazing to lift that trophy in front of this amazing crowd. "As soon as I walked on, the crowd were behind me and it was a real goosebumps moment, the hairs stood up on the back of my neck." 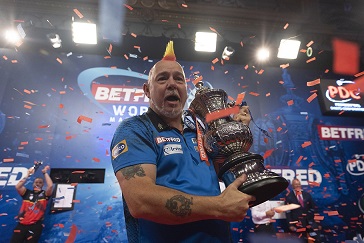 Wright averaged 105.90 in the final and claimed a 150,000 pound prize, denying Van den Bergh - who spent three months living with his opponent during lockdown in 2020 - the chance to become only the fourth player to retain the title.
Wright was clinical in punishing early Van den Bergh misses to open up leads of 3-0 and 4-1, before reeling off four straight legs - including breaks of throw in 11 and 12 darts - to move 8-2 up. Van den Bergh stepped in following five uncharacteristic misses from his rival in leg 11, and produced a 12-darter to reduce the gap to 8-4. Wright, though, restored his cushion with a 13-dart leg and produced a ten-darter to move 10-4 up and close in on glory. Van den Bergh rallied, finishing 87, 96 and 84 in winning four of the next six to pull back to 12-8, only for an 11-darter from Wright to halt his momentum. The Scot then took out 62 to lead 14-8 and punished misses from the reigning champion in the next two legs as he edged clear. After Wright then took out 84 on the bull to create a 17-8 cushion, Van den Bergh landed the game's only ton-plus checkout of 105, but it proved to be only a consolation as Wright sealed the deal with a 13-dart leg on double nine. 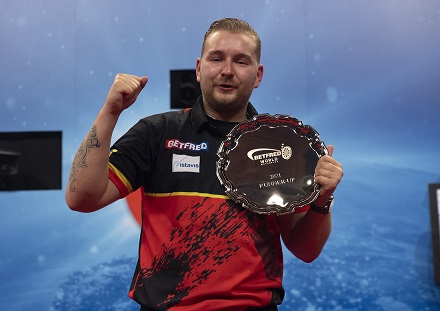 Van den Bergh picked up 70,000 pound as runner-up following a stout defence of his title, which included a victory over World Champion Gerwyn Price and a second round record 14 180s in his defeat of Dave Chisnall.
The popular Belgian remained upbeat despite a frustrating final, with his run on his Winter Gardens debut seeing him become just the second player in the tournament's history to reach the final in his first two World Matchplay appearances.

"Every game I've played, I've dug deep and played my best but tonight Peter was just outstanding," said Van den Bergh. "Of course it was a disappointment [to lose] but I can say that I gave everything and never gave up. "I said to Peter that I'll be back stronger. I'm number five in the world and I'm only 27, so I've got time on my side."