James Wade dumped out reigning champion Rob Cross on a dramatic opening night at the 2022 Cazoo European Championship, as top seed Luke Humphries stormed through with a sparkling display in Dortmund on Thursday. 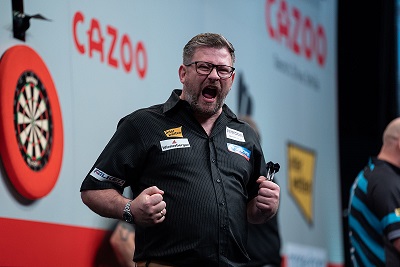 The opening night of the 500,000 pound event saw former champions Cross and Wade collide at the Westfallenhalle, but it was 2018 winner Wade who came out on top in an edgy affair.
Cross, who becomes the fourth consecutive defending champion to bow out in the opening round of this event, had fought back from 5-3 down to force a decider, after Wade missed tops for a 111 clincher in leg ten. However, two-time champion Cross was unable to complete the comeback, spurning two match darts at tops in a dramatic finale, as Wade eventually pinned double one to seal the deal with his sixth match dart.

"I should have wrapped the game up a lot earlier," reflected Wade, who will take on Dirk van Duijvenbode for a place in the last eight. "Rob produced his usual barrage at the end and put me under pressure, but it was a really respectful game and I'm very happy to be through." 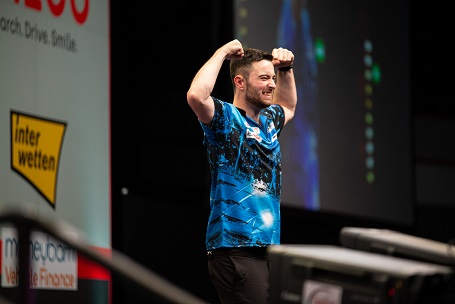 Luke Humphries was one of three players to register ton-plus averages on Thursday, and the top seed kicked off his title bid with a 6-4 win over Krzysztof Ratajski, inflicting the Polish star's fifth straight first round exit at the European Championship.
Humphries - a winner of four European Tour titles in 2022 - scored relentlessly in the early exchanges, following up an 11-dart hold with a trio of 14-dart legs to move 4-2 ahead. The pair traded holds before Ratajski conjured up a skin-saving 154 finish to preserve his hopes, but Humphries kept his cool, following up back-to-back 140s with a 66 combination to wrap up proceedings with a 102 average.

"I realised I'd left my darts at home when I arrived, so I had to pick up a brand new set and I was surprised by how well they went," admitted Humphries. "This is a big tournament for me, it's a chance to get my first major and as the number one seed there's a bit of added pressure, so I was really happy with my performance." 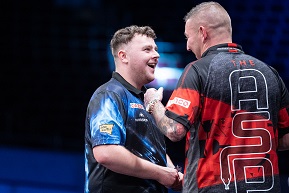 Northern Irish sensation Josh Rock enjoyed a dream televised debut in Dortmund, denying Nathan Aspinall in a gripping last-leg tussle to set up a fascinating tie against Michael Smith in round two.
Rock has been a revelation on the ProTour since claiming his Tour Card in January, and the emerging star defied a valiant fightback from World Grand Prix runner-up Aspinall to prevail with a 96 average. Aspinall - aided by brilliant 109 and 136 checkouts - rallied from 4-2 adrift to force a last-leg shoot-out, but a timely fourth maximum from 21-year-old Rock catapulted him to a landmark victory.

"I was very nervous backstage, but I got the job done and that was the main thing," said Rock, who claimed his maiden Players Championship title on Sunday. "I had to get used to the big stage but I really enjoyed it up there. I have always loved darts since I was a young boy, so I just want to keep on doing what I'm doing." 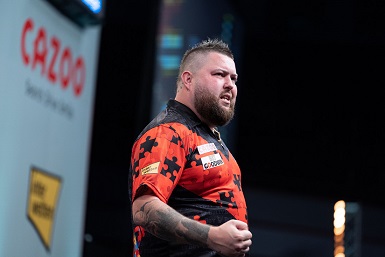 World Championship runner-up Smith recovered from a sluggish start to overcome Czech qualifier Karel Sedlacek in the penultimate match of the evening, winning five of the last six legs to complete a 6-4 triumph. Sedlacek followed up 15 and 14-dart breaks with a 110 outshot to lead 3-1, but he was punished for spurning three darts for a 4-3 cushion, and Smith found his range in the latter stages to avoid a surprise exit.

Vincent van der Voort caused the upset of the night at the Westfallenhalle, punishing a profligate display from fifth seed Damon Heta to secure an emphatic 6-2 victory. Heta drew first blood with a magnificent 170 checkout, but he was unable to build on his blistering start, and Van der Voort - who landed a stunning 137 finish in leg six - won four straight legs to create an all-Dutch tussle against Danny Noppert.
UK Open champion Noppert converted two huge ton-plus checkouts to overcome Andrew Gilding, averaging 99 and taking out 136 and 140 finishes to complete a convincing 6-3 win. 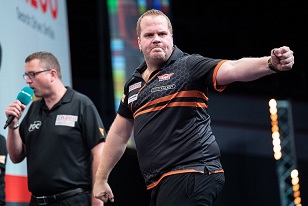 Van Duijvenbode will also feature in Saturday's second round, producing a quality display to kick off this year's tournament with a 6-3 success against Latvian debutant Madars Razma. The Dutchman averaged 102, landed three 180s and converted 72, 86, 88 and 130 checkouts to cap off a clinical display and set up a mouth-watering last 16 showdown against Wade.

Elsewhere, Ryan Searle returned to winning ways with a dramatic deciding-leg win over Martin Lukeman, surviving a match dart in the penultimate leg to progress with a 102 average. The pair exchanged breaks in a topsy-turvy contest, but trailing 5-4, Searle capitalised on his reprieve by firing in a 14-dart hold to book a meeting with Humphries in the last 16.