Peter Wright stormed through to the quarter-finals of the Cazoo European Championship in Dortmund, as Michael Smith edged out Josh Rock in a spectacular showdown on Saturday.

The third day of the 500,000 pound event featured eight second round ties in a bumper double session at the Westfalenhalle, with World Champion Wright the only former winner to progress to the last eight. 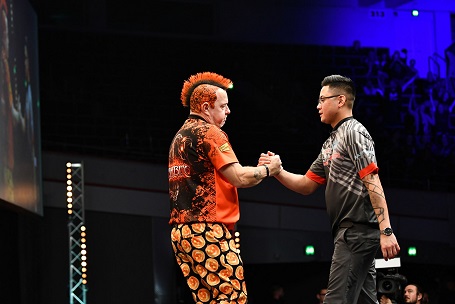 The 2020 champion continued his bid for a second European Championship crown with an emphatic 10-4 win over Rowby-John Rodriguez, crashing in ten maximums in a remarkable display of power scoring.
The opening four legs were shared, but Wright stamped his authority on proceedings by reeling off seven consecutive legs, including a five-leg spell of 12, 15, 13, 15 and 11-dart legs. Rodriguez - who dumped out Gerwyn Price in round one - converted a 111 skin-saver to prolong the contest, but after missing the bull for a show-stopping 167 checkout, Wright returned to seal the deal via double eight.

"I'm happy with the win but I'm gutted for Rowby. I was expecting a really tough game, but he wasn't quite on it," reflected Wright, who will face Ross Smith in the quarter-finals. "There are plenty of other players that are playing better than me, so if I want to win it, I've got to improve."

Ross Smith celebrated one of the biggest wins of his career in Saturday evening's curtain-raiser, overcoming Dimitri Van den Bergh 10-8 with a 101 average and eight 180s in front of 7,000 fans at the Westfalenhalle.
Smith produced a blistering mid-game burst to seize the initiative, taking out a 121 finish on the bull in leg nine and landing an 11-darter to establish a 6-4 cushion. The 33-year-old then produced a second 11-darter to edge 8-7 in front, before keeping his cool to pin double five and secure a place in his second televised quarter-final. 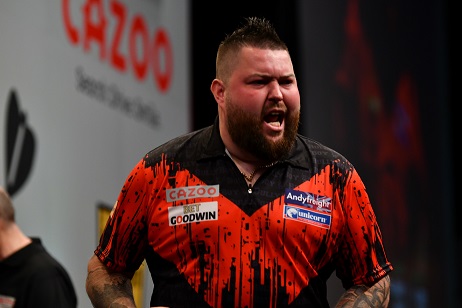 Michael Smith also moved through to Sunday's last eight, delivering a darting masterclass to edge out Northern Irish sensation Josh Rock in an epic encounter. Smith averaged 106, landed nine 180s and converted ten of his 15 attempts at double to defeat a fearless Rock, who also produced a ton-topping average in just his second televised appearance.
The 21-year-old raced into an early 3-0 lead, but Smith soon sparked into a life - opening his account with an 11-darter and levelling proceedings at four apiece with a majestic ten-dart leg. The pair continued to trade blows in a mesmerising affair, but with the scores locked at 8-8, Smith followed up a 13-dart hold with a 121 checkout on the bull, after Rock had missed two darts at tops to force a decider.

"Josh is unreal. He is 21 years old and he is lighting up the PDC at the minute," said Smith, who will take on Luke Humphries in a titanic quarter-final tussle. "He is hitting 109 and 110 averages constantly, but I wanted to own that stage today, and luckily I brought my best game when I needed to."

Top seed Humphries continued his bid for a maiden televised ranking title with a battling 10-6 victory over Ryan Searle in another quick-fire contest.
Humphries squandered 23 darts at a double in a profligate display, but a sequence of four straight legs midway through the contest saw him fashion out a 6-3 advantage. The 27-year-old then conjured up a 12-dart break on the bull in leg 13 to halt Searle's fightback, and he retained that buffer to preserve his hopes of European Championship glory.

"I made it a lot harder for myself than it should have been," conceded Humphries, who is through to his first televised quarter-final since January. "I will probably be the underdog against Michael, but if I can go under the radar that's a good thing, because when I go under the radar I'm dangerous." 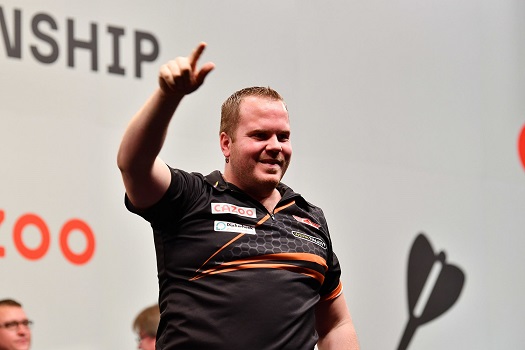 Dirk van Duijvenbode produced a barrage of power scoring to dump out 2018 winner James Wade, recovering from a sluggish start to register a fifth consecutive victory over the left-hander.
Van Duijvenbode was unable to find his range in the opening exchanges, but he rectified matters by winning six of the next seven legs - including a tops-tops 80 finish - to establish a 6-3 cushion. Wade reduced the arrears to 7-6, but a spectacular 138 finish from Van Duijvenbode in leg 14 proved decisive, with the Dutchman closing out a 10-7 success with a 95 average and seven 180s.

The Dutchman will take on his compatriot Danny Noppert in Sunday's quarter-finals, after the UK Open champion fired in a superb 12-darter to deny Vincent van der Voort in a last-leg decider.
Van der Voort made the brighter start; opening his account with a superb 135 checkout, before completing his second bullseye finish with a 128 kill to restore parity at five apiece. The topsy-turvy nature of the contest continued, but Noppert delivered the goods when it mattered, following up his fifth 180 with an 85 finish on tops to reach the quarter-finals for the second straight year. 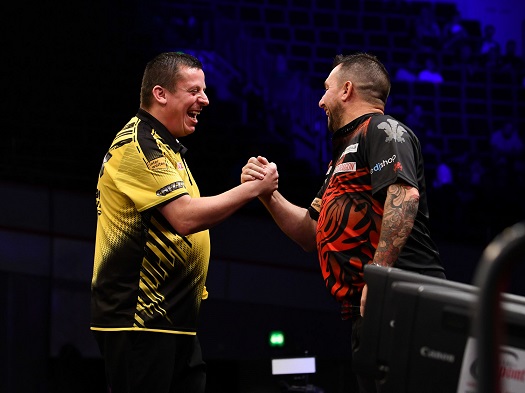 Elsewhere, Dave Chisnall produced a superb late surge to stun Jonny Clayton and set up a tussle against Chris Dobey for a place in the semi-finals.
Chisnall recovered from an abject start to run out a 10-6 winner against last year's semi-finalist Clayton, reeling off five consecutive legs to complete an unlikely comeback. There was a 15-point deficit in the averages for much of the contest, but Chisnall found his range in the closing stages, hitting five 180s in the last six legs to dump out the Welshman.

Meanwhile, Dobey continued his fine form in Dortmund to make back-to-back TV quarter-finals, following up his first round win over Michael van Gerwen with a dominant 10-5 victory over Jose De Sousa.
The 32-year-old punished 21 missed darts at double from former Grand Slam champion De Sousa to advance in emphatic style, averaging 95, hitting six 180s and converting 47% of his attempts at double. Following a high-quality start, a run of four consecutive legs powered Dobey into a commanding 6-2 lead, and De Sousa was unable to respond, with the recent World Grand Prix quarter-finalist taking out 76 and 74 finishes to round off Saturday's action.

This year's showpiece will conclude with another bumper double session on Sunday, as the quarter-finals take place in the afternoon, followed by the semi-finals and final on a blockbuster evening at the Westfalenhalle.