Peter Wright claimed his first European Tour title since 2017 as he edged out Dimitri Van den Bergh in a thrilling final to clinch Interwetten German Darts Open glory in Jena. 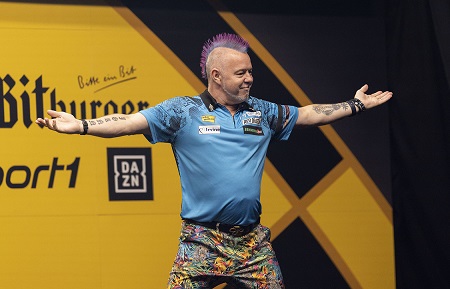 Wright, competing in just his second tournament since returning from gallstones surgery last month, produced a series of superb displays to scoop the 25,000 pound top prize at the Sparkassen-Arena on Sunday. The World Champion was the epitome of consistency throughout the weekend, and he defied a spirited display from Van den Bergh to close out an 8-6 success and lift his seventh European Tour title.
Wright made a blistering start to Sunday's showpiece, following up 120 and 160 checkouts with a ten-darter on the bull to establish an early 3-2 lead. Van den Bergh responded with a 12-darter to level at three apiece - sparking a run of three straight legs for the Belgian - although misses at tops and then the bull for a 161 finish in consecutive legs enabled Wright to restore parity at 5-5. The Scot rattled in a 13-darter to regain the lead, and although Van den Bergh again delivered a 12-dart riposte, Wright followed up a 68 combination with a 13-dart hold to end his five-year wait for European Tour success.

"Dimitri is a fantastic player. He's the future of darts, but the old guy is still doing it!" claimed Wright, celebrating his first PDC ranking title since February. "Last week I really fancied going to Hungary and winning the tournament, but I went out first round. I wasn't good enough. "Jena is a fantastic place to play though. The crowd get behind me and inspire me to play fantastic darts, and we wouldn't be anywhere without these amazing fans."

Following his opening round exit in Hungary last weekend, Wright returned to winning ways with a 6-3 victory over Raymond van Barneveld on Saturday night, and he saw off Jonny Clayton by the same scoreline to continue his challenge on Sunday afternoon. The Scot produced a dominant display to sweep aside Ross Smith 6-2 in the quarter-finals, before ending Joe Cullen's quest for back-to-back European Tour titles with a 7-4 victory in the semi-finals, posting ton-plus averages in both matches. 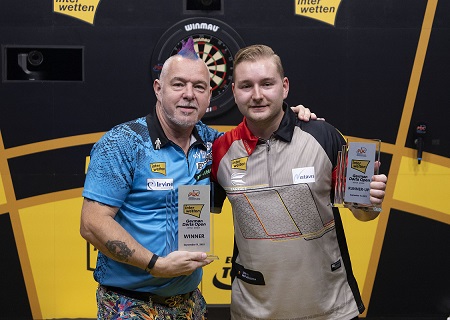 Van den Bergh, featuring in his second European Tour final, endured an eventful evening in Jena - undergoing a medical assessment after he felt unwell following his quarter-final win.
The former World Matchplay champion, who eased past David Evans on Saturday afternoon, fought back from 4-1 down to dump out Luke Woodhouse in the last 16, conjuring up an 11-darter in the decider after Woodhouse had missed the bull for victory. The 28-year-old then converted three ton-plus checkouts to defeat a wasteful Krzysztof Ratajski in the last eight, before easing past Jose De Sousa 7-3 in the semi-finals to secure the 10,000 pound runner-up prize.

De Sousa posted a 101 average in seeing off Steve Beaton on Sunday afternoon, before pinning a 126 checkout on the bull to stun world number one Gerwyn Price in a thrilling quarter-final tie.
Meanwhile, Cullen won through to the semi-finals with a trio of deciding-leg wins, taking out a sensational 136 checkout to edge out Joe Murnan, while surviving match darts in wins over Daryl Gurney and top seed Luke Humphries.

Humphries - a four-time winner on the European Tour in 2022 - kicked off Sunday's action by dispatching Dave Chisnall with a 105 average, only to squander five match darts in his quarter-final clash against Cullen. Price and Smith also suffered last eight exits despite landing 106 averages in wins over Martin Schindler and Damon Heta earlier in the day, while Ratajski's European Championship qualification hopes remain in the balance following his defeat to Van den Bergh.

The PDC European Tour continues with the Belgian Darts Open from September 23-25 at the Oktoberhallen in Wieze, as 48 players compete in the penultimate event of 2022. The tournament will be broadcast live on PDCTV, exclusively on DAZN in Germany, Austria and Switzerland, and through bookmakers' websites worldwide.