Gerwyn Price and Raymond van Barneveld will clash at the Cazoo Grand Slam of Darts on Sunday after being amongst three former champions to open their challenges in Wolverhampton with group stage victories. 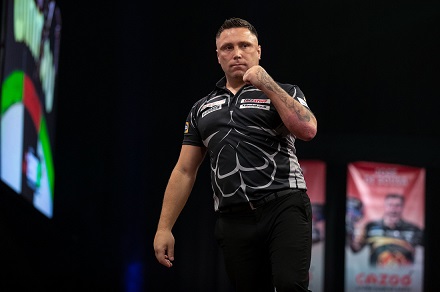 Reigning champion Price is bidding to win a fourth Grand Slam crown at the Aldersley Leisure Village this week, and raced to a 5-1 win over Ted Evetts in his first Group A contest on Saturday afternoon. The world number one averaged over 101 in a superb performance against the World Youth Champion, and went close to a nine-dart finish before closing out an emphatic win.

"I concentrated on my own game and it was a pretty decent performance," said Price. "I'm in a good place and I felt pretty comfortable in that game. "I love being defending champion and it's nice to come back here - I've never lost in this venue and I'm playing well enough. "I played Raymond a couple of weeks ago and missed doubles which cost me the match, so I know I have to be on my game and hit my doubles. Today they were, and hopefully they will be tomorrow." 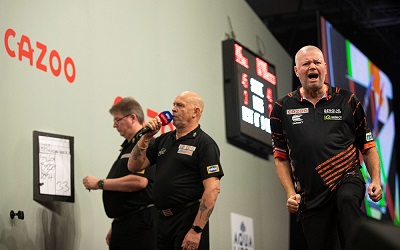 2012 Grand Slam champion Van Barneveld, meanwhile, began his Group A challenge with a 5-3 comeback win over Dave Chisnall, who led 3-2 but was punished for missed doubles as the Dutchman capitalised.

"I'm really happy with this win," said Van Barneveld. "I know what I can do, it means a lot to be here and I still believe and I'll keep on fighting." 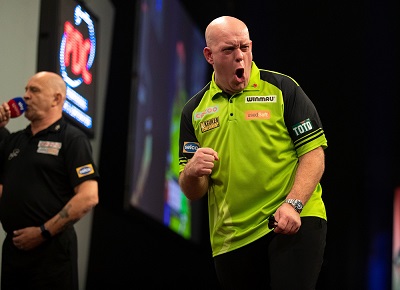 "To get the first win out of the way always gives you a little bit of confidence but there's still a long way to go," said Van Gerwen. "Everyone knows how hard this tournament is to win - it's been too long since I won this but I feel good and there's more in the tank."

Third seed Van Gerwen will now meet Luke Woodhouse in their second Group G contest on Sunday, after the qualifier took out 104 in the deciding leg of his tie with European Champion Ross Smith. 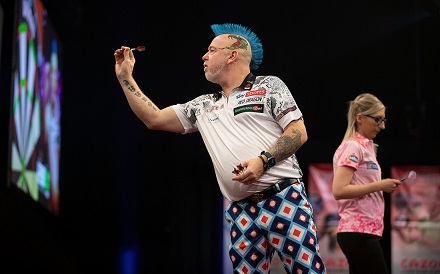 "It was a good start for me today - Fallon gave me chances and I took them," said Wright. "I used a new set of darts and I feel really good with them, but they didn't quite go how I wanted."

Soutar, meanwhile, took out a superb 145 checkout in the deciding leg of his opener against Nathan Aspinall to make a winning Grand Slam debut.

Jonny Clayton provided the only whitewash win of the day, restricting North American Champion Leonard Gates to just one dart at a double in their Group F opener. Clayton will come up against Jermaine Wattimena in Sunday's second matches, after the Dutchman produced a fine 5-2 win over World Cup winner Damon Heta.

Danny Noppert survived a missed match dart from PDC Asian Championship winner Christian Perez in the deciding leg of their Group B contest before prevailing on double 14.
The UK Open champion now plays Simon Whitlock, who opened his challenge with a 5-2 success over Mensur Suljovic, landing a handful of 180s and finishing five doubles from ten attempts. 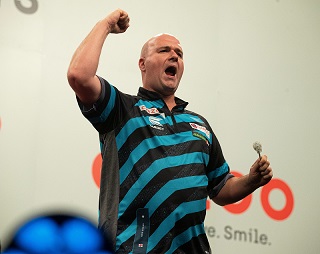 Rob Cross and Dirk van Duijvenbode will clash in Group D on Sunday afternoon following impressive opening performances in Wolverhampton.
2018 World Champion Cross came from two legs down against Czech youngster Adam Gawlas to race to a 5-2 victory, averaging over 100 in the process as he hit legs of 11 and 12 darts amongst five in a row.
Van Duijvenbode survived a missed match dart from Martin Schindler to claim a 5-4 success a see-saw Group D opener, averaging 103 in a high-quality display. The Dutchman took out 127 as he led 3-1, only for Schindler to finish 133 as he took three successive legs - but the German missed a chance to claim victory in leg eight before Van Duijvenbode landed two 180s in a superb 11-darter to claim the decider.

The top two players from each group will progress to the knockout stage of the event, with the last 16 action beginning on Wednesday November 16 and running through to the semi-finals and final on Sunday November 20.