The 2022 WDF Winmau World Masters drew to a close on Sunday, with four new champions crowned on an exciting day at De Bonte Wever in Assen. Andrew Sinclair recaps the action.

For the first time in 16 years, the Men's Winmau World Master is a Dutchman. 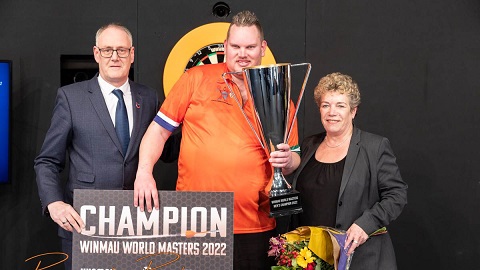 Wesley Plaisier became the third Dutch champion in the tournament's illustrious history after Raymond van Barneveld and Michael van Gerwen with an impressive 7-2 final win over Barry Copeland.
 In what was a high-quality game featuring seven 180s, the key turning point came in the fourth leg. Already 2-1 up, Plaisier punished multiple missed doubles from Copeland in the fourth leg to break the Northern Irishman's throw with a two-dart 60 checkout. The big Dutchman then cemented his advantage by taking out 104 in the next leg before securing another break of throw with a 17-darter. Copeland got a break of his own to make it 5-2 but couldn't get more of a foothold, Plaisier pinning 35 to move 6-2 up before sealing victory with a brilliant 118 finish.
Plaisier, who averaged 96.27 in the final, had looked dead and buried in the semi-finals. Finishes of 72, 79 and 110 had Danny Lauby up 5-2 in a race to six but the American faltered at the finish line, missing multiple darts to win the match 6-3 and then 6-4. Plaisier, whose first WDF title had come earlier in the year at the Belgian Open, took the chances given to him to win it 6-5.
That game was in stark contrast to the quarter-finals, where Plaisier produced a performance that made him look like the man to beat. He threw three 180s in a 5-2 win over Davy Proosten, averaging 96.03 in the process.

Like Plaisier, Barry Copeland had had to survive a scare of his own to reach his first major final. 'The Daddy' had led 4-2 in his quarter-final against Kay Smeets before getting pegged back to a decider. Smeets would wire double 18 for a match-winning 156 finish in that last leg, with Copeland then showing nerves of steel to capitalise and pin tops first time.
The Northern Irishman had a much smoother time of it in the semi-finals, a five-leg burst proving crucial as he came from behind to defeat Kai Fan Leung 6-3. The other two quarter-finals had seen Danny Lauby win five legs in a row to beat Nick Kenny 5-2 and Leung knock off Owen Roelofs by the same scoreline despite averaging seven points less.

Beau Greaves completed her year of almost unmatched dominance on the Women's tour with a 15th ranking title and second career major in the Women's Masters. 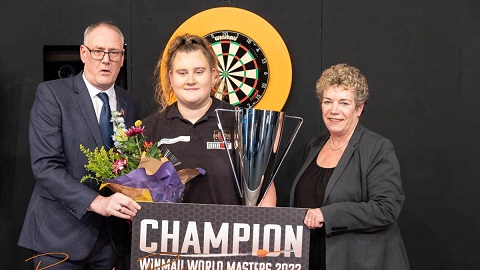 The 18-year-old became just the fourth person in history to win both the youth and senior World Masters titles with a resounding 6-0 win over Spain's Almudena Fajardo. Greaves threw six 140s and recorded finishes of 108 and 121 in the final, recording an 80.52 average in the process.

It could very easily have been a different final line-up entirely though as both Greaves and Fajardo had to come through almighty tussles in the semi-finals. Greaves' only loss of the entire weekend had come to Mayumi Ouchi in the World Open and the Japanese player looked as though she'd repeat the trick in the Masters.

Ouchi won the bull and thanks to four successive holds of throw, helped by her landing four 180s, never trailed until Greaves pinned the final double in the deciding leg. Greaves levelled the game at 4-4 with a 100 checkout and then would benefit in the last leg from Ouchi suffering three bounce-outs.
In her semi-final, Europe Cup finalist Fajardo led 3-0 against Natalie Gilbert but was also taken all the way to a decider as Gilbert eventually found her rhythm. Gilbert, a finalist in the World Open the day before, would miss eight agonising match darts, any one of which would have qualified her for Lakeside through the ranking table, before Fajardo pinned double one. 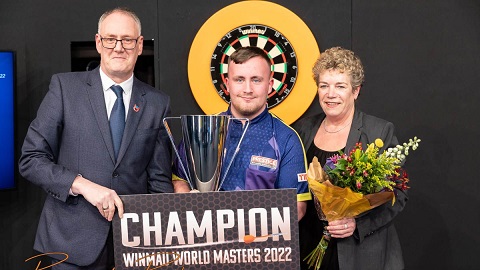 Luke Littler became the first English winner of the Boys World Masters in nine years after a final victory over Peter Stewart Jnr.
'The Nuke' opened the final with a brilliant 146 finish against the darts. Another ton-plus finish would prove crucial for the 15-year-old, a 105 out yielding the first hold of throw of the game for either player in the fourth leg. That put Littler 3-1 up and he'd maintain that one-break cushion all the way to the finish, wrapping up a 6-4 victory with a 16-darter. 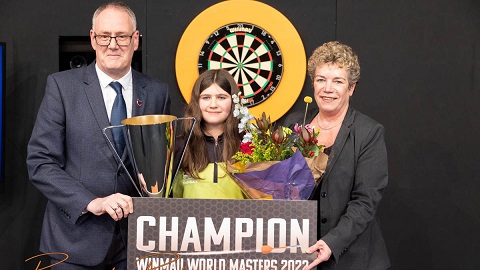 Paige Pauling joined the likes of Beau Greaves and Fallon Sherrock as English winners of the Girls Winmau World Masters thanks to a 5-2 final victory against Iida Lanko.

The Finn drew first blood in the final, a nice 86 finish seeing her break the Pauling throw. Pauling immediately broke back though by taking a scrappy second leg before winning the next three to establish a 4-1 lead. Lanko clawed some of the deficit back by winning the sixth leg but she couldn't mount any sort of comeback, Pauling sealing the title by taking out 60.