Michael van Gerwen landed a nine-dart finish on his way to a stunning seventh Cazoo Players Championship Finals title on Sunday night as he defeated Rob Cross 11-6 in an incredible final.

The Dutchman claimed a fifth televised title of 2022, and a third ranking triumph on the big stage, with another extraordinary success at Butlin's Minehead Resort. Van Gerwen followed up his early-round wins over Ryan Meikle, Cameron Menzies and Dimitri Van den Bergh earlier in the weekend with three stellar displays on Sunday to scoop the 100,000 Pound top prize.
He averaged over 100 in both his 10-7 quarter-final defeat of fellow countryman Danny Noppert and a dominant 11-5 success against Luke Humphries to book his spot in the final. There, he delighted a packed Butlin's crowd with a sensational nine-darter, a 170 checkout and a 142 finish on his way to claiming the title for a seventh time in ten years. 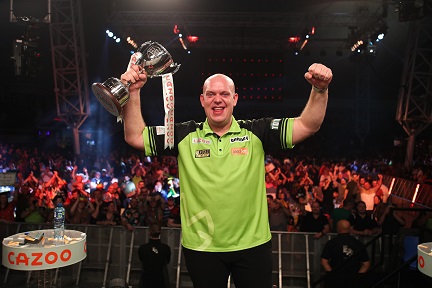 Van Gerwen broke down in tears as he dedicated the win to his daughter Zoe, and said: "My daughter was watching every game and said 'Daddy, are you coming home with a big trophy again?'. "I said if I win the trophy again it's going to be yours, so that's why I wanted to win it. "I'm here to win tournaments - I love winning, I love performing on the stage and to produce something extra, something special in a final like this, gives me a lot of energy. "It was a special game of darts - I think we both played well and we had to dig really deep, both of us. "I managed to hit a nine-darter and 170 finish when it mattered but overall I think Rob Cross played a phenomenal game and the game had everything. "I know I'm capable of a lot more but you also have to be realistic and to win this trophy again, for the seventh time, means a lot to me."

Van Gerwen's nine-darter came in the third leg of the final, opening with a 177 and then landing a 180 before finishing 144 on double 12 to achieve the feat for the second time in the event. He also produced legs of 12 and 11 darts to move 6-2 up, with both players having six perfect darts in other legs during a heavy-scoring opening to the decider. Cross had opened the final with a 13-dart leg and also posted two 14-darters, but found himself 7-3 down as Van Gerwen fired in a 12-darter - which featured another two 180s - to move four legs from the title. Cross returned from the break with three successive legs to cut the gap to one leg - but crucially the Hastings ace missed two darts at double 16 to level in leg 14. Van Gerwen ruthlessly stepped in to pounce with a 170 checkout, and took out 70 to restore breathing space at 9-6 before powering in a 142 checkout and double 16 to seal the title in style. 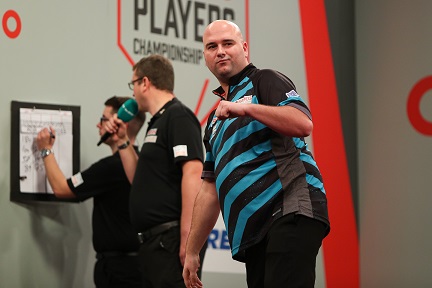 Cross followed up an excellent 10-3 quarter-final defeat of Dirk van Duijvenbode, where he averaged over 104 and missed just six darts at a double, with an 11-7 semi-final win over Jonny Clayton. The 2018 World Champion was appearing in his first televised final for over a year, but had to settle for the 50,000 Pound runner-up cheque.

"It's been an amazing weekend but it was Michael's night," said Cross. "Mike was phenomenal. "Once I started to find my feet and find a few 180s, it could have been a little bit different but I missed chances and missed doubles. "I really enjoyed this weekend and there are positives to take - I'll move on to the World Championship."

Humphries reached a second successive televised semi-final with a clinical 10-3 quarter-final win over Joe Cullen, while Clayton matched that scoreline in the last eight against Callan Rydz to continue his best run since September.