Joe Cullen has his Cazoo Premier League destiny in his own hands ahead of a decisive night in Newcastle on Thursday, as he prepares to take on Peter Wright in a straight shoot-out for Play-Off qualification. 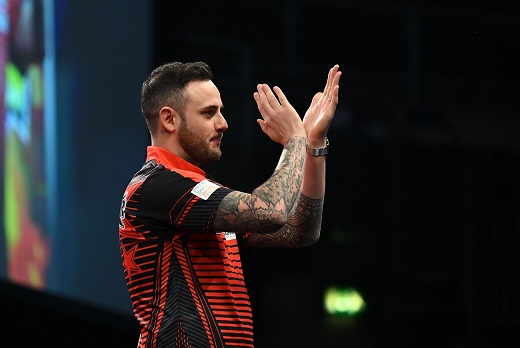 Cullen occupies fourth spot heading into the final night of league phase action at the Utilita Arena, as he aims to preserve his bid for debut glory. The 32-year-old leapfrogged Wright after sealing his second night win of this year's league phase at The O2 in London last Thursday, defeating the world number one, Gary Anderson and Jonny Clayton to scoop the 10,000 pound winner's bonus.
Cullen and Wright will now collide in a blockbuster quarter-final clash in the North East, with the winner assured of the fourth and final spot at next month's Play-Offs in Berlin.

"You don't want to be relying on people to win or lose for you. It is in my own hands," said Cullen. "I have beaten Peter the last two times I have played him, so I think he will definitely be conscious of that." "If I lose to Peter, it is my own fault. There will be no problem, it is so much easier to take."

It has been a whirlwind few months for Cullen, who sealed a spot in this year's roadshow with his maiden televised title at the season-opening Masters. He also secured back-to-back Players Championship crowns in February to close in on a place in the world's top ten and take his haul of PDC titles into double digits. The Yorkshireman has bemoaned his inconsistent form throughout this year's Premier League, but he has featured in four finals - a record only trumped by Clayton, Michael van Gerwen and James Wade.

"It has been a massive learning curve for me. I have been doing this for a long time, and you think that there is not much left to learn, but I have learnt things about myself more than anything," Cullen added. "I think I have developed some sort of grinding win which I never had before. It was always all or nothing. It is definitely pleasing going into the big TV events and the rest of the year. "I have really enjoyed my time here, and if I can get into the Play-Offs in Berlin, it will be a successful Premier League."