Peter Wright believes being world number one will give him added confidence heading into Night Five of the Cazoo Premier League in Brighton on Thursday. 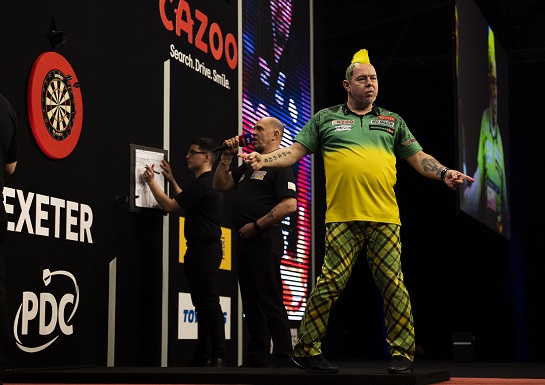 Wright leapfrogged Gerwyn Price to take top spot in the rankings at last weekend's UK Open, continuing a perfect start to 2022 for the reigning World Champion Despite posting a below-par display in his loss to Michael van Gerwen in the Night Four final, Wright also remains top of the Premier League table heading into Night Five.
As the 1m pound tournament returns to the Brighton Centre for the first time since 2017, Wright takes on Jonny Clayton in a first-versus-third contest in the quarter-finals.

"It is a nice feeling [to be world number one] and it's another bit of history I've made," said Wright. "I wanted to become world number one by beating Gerwyn in the final in Minehead. Unfortunately that didn't happen but here I am, number one in the world! "I showed all those people, the doubters out there. All the belief that my wife Jo and my family have got to get me to number one in the world. "It's been really hard and now I've got to keep hold of it. I travelled back from Minehead, and since I got back I've just been on the dartboard. "It will be a good match between Jonny and he doesn't like playing me anymore, I know how to beat him!"

The opening game of the night will see Michael Smith looking to bounce back from his UK Open final loss against Gary Anderson in a clash of the league's bottom two. Night Four winner Van Gerwen takes on James Wade, before the last quarter-final sees Gerwyn Price in action against debutant Joe Cullen.