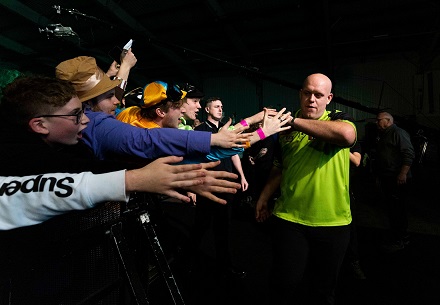 Van Gerwen will face Michael Smith in the quarter-finals as he looks to make it three wins in four Premier League nights.
"When you play in front of your own people you always put more pressure on yourself," said Van Gerwen. "There will be pressure on my shoulders, even more so now that Raymond [van Barneveld] isn't involved, but on the other hand it gives you more energy. "Results have been going a lot better lately. I'm not playing a lot better but I am more effective in key moments. "Last week was frustrating to lose in the quarter-finals after winning the previous two weeks. "I work really hard and always keep believing in myself. You have to work hard to be the best."

The opening game of the night will see second-placed Peter Wright take on James Wade, before Night Six winner Gary Anderson begins his quest for back-to-back wins against Joe Cullen. Jonny Clayton and Gerwyn Price face off in an all-Welsh clash, before Van Gerwen and Smith contest the last quarter-final.

The quarter-final winners will return to the stage for the semi-finals, before the final sees the Night Seven champion crowned with five league points and a 10,000 pound bonus awarded to the winner.