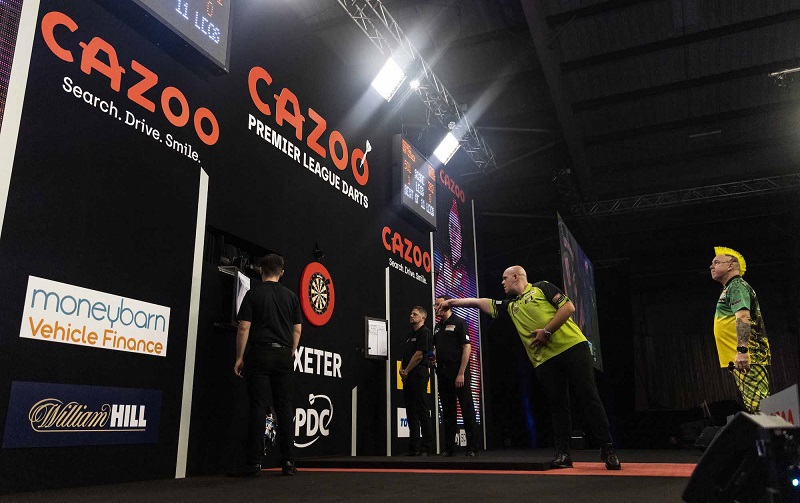 Van Gerwen whitewashed Peter Wright 6-0 in the final to become the fourth different winner in as many nights in the new-look Premier League's first month.
The five-time Premier League champion enjoyed a return to form at a sold-out Westpoint Exeter, kicking off the night with a 102.36 average in a 6-1 defeat of Jonny Clayton. Van Gerwen backed that up with a 104.37 average in a 6-2 win over Michael Smith, before making it a hat-trick of wins on the night against Wright. The Dutchman pockets the 10,000 pound top prize and five league points to climb to second in the table following a memorable return to winning ways.

"I think it was a really important win tonight, I've been waiting for this for quite a long time," said Van Gerwen. "I didn't perform 100 per cent in the previous Premier League nights, but tonight I played some good darts. "I think I deserved to win tonight and there's more to come, hopefully I can kick on for the rest of the tournament. "I've been trying to develop my game and improve; winning tonight gives me confidence."

A one-sided final saw Van Gerwen at his clinical best, missing just two attempts at double and taking out a 134 finish to punish a below-par Wright.

Cardiff champion Wright had seen off world number one Gerwyn Price and James Wade with 6-2 victories by averaging over 100 in both games, but had no answer to Van Gerwen as he missed out in the final - although the Scot remains top of the table.

Losing semi-finalists Smith and Wade leave Exeter with two points each thanks to their respective quarter-final victories over Joe Cullen and Gary Anderson - with Smith picking up his first win of the season.

The Cazoo Premier League roadshow heads to The Brighton Centre on Thursday March 10 for Night Five of the league phase, as Wright meets Clayton in a first-versus-third contest. The night's other quarter-finals will see Van Gerwen take on Wade, Anderson faces Smith and Cullen plays Price as the 1 million pound tournament returns to Brighton.