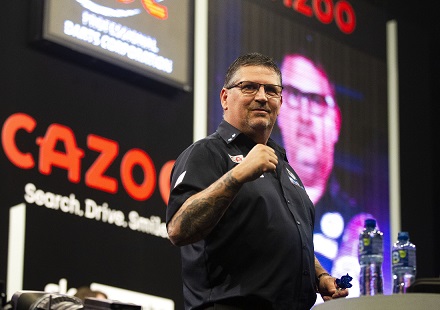 Two-time Premier League champion Anderson enjoyed his best night of the season to claim the 10,000 pound bonus for winning in Nottingham, becoming the fifth different winner from six events in 2022.
Anderson had not won a match since the season's opening night in Cardiff, but racked up three wins in Nottingham to put himself back in contention in this year's league table.
The Scot survived a missed bullseye from Jonny Clayton to win the deciding leg of their quarter-final, before seeing off World Cup-winning team-mate Peter Wright 6-3 by finishing six doubles from nine attempts in the last four. He opened the final against Smith with a brilliant ten-darter, and though the UK Open runner-up finished 105 and then moved 2-1 up, Anderson produced a sensational display to pull clear. Double eight levelled for Anderson, before legs of 12 and 13 darts were followed by a 74 finish as he moved 5-2 up. Smith finished double eight for a 13-darter to respond in leg eight and took out 68 to pull back to just one leg behind his former mentor. However, Anderson regained breathing space with a 177 score in the next and took out double four for the win, ending the final with a 104.24 average.

"I'm off the bottom of the table and I'm happy," said Anderson. "Just to get two points would have done me, I'd have been happy. "It was a struggle against Jonny, I played a bit better against Peter and I played well against Michael. When I got to near the winning line I was panicking a bit! "I'm surprised, after the way I've been playing. It's been an absolute nightmare. It's soul-destroying when you turn up week-in, week-out and get beaten, and you're hitting 89 averages. "Once we step on that stage, even if you know you're struggling, you still want to win. "On the practice board, everything's fine but when I come up [on stage] everything's not right so that's up to me to sort out." 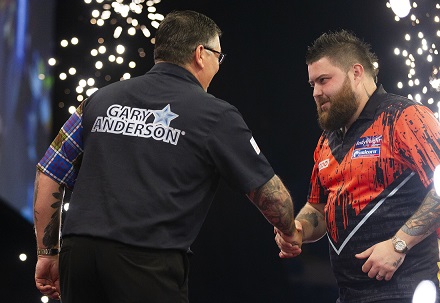 The defeat means Smith has lost out twice in Premier League finals in as many weeks, having been the Brighton runner-up. The World Championship finalist was a clinical 6-1 winner against James Wade in the quarter-finals, before reeling off six straight legs in a stunning comeback against Gerwyn Price in the semis.

On his return to action following a hand injury, Price ended Michael van Gerwen's bid to win a third successive night with a 6-4 quarter-final success.
Wright also returned to action, having withdrawn during last weekend's German Darts Championship due to a back problem, and saw off Cullen in their quarter-final tie.

The Cazoo Premier League will return to the Netherlands for the first time since 2019 for Night Seven next Thursday at Rotterdam Ahoy.
The four matches on the night will be headlined by Dutch hero Van Gerwen's meeting with Smith. Anderson will begin his bid for back-to-back wins against Cullen, while Wright meets Wade and Clayton plays Price in an all-Welsh encounter.