Littler makes history as second round gets underway 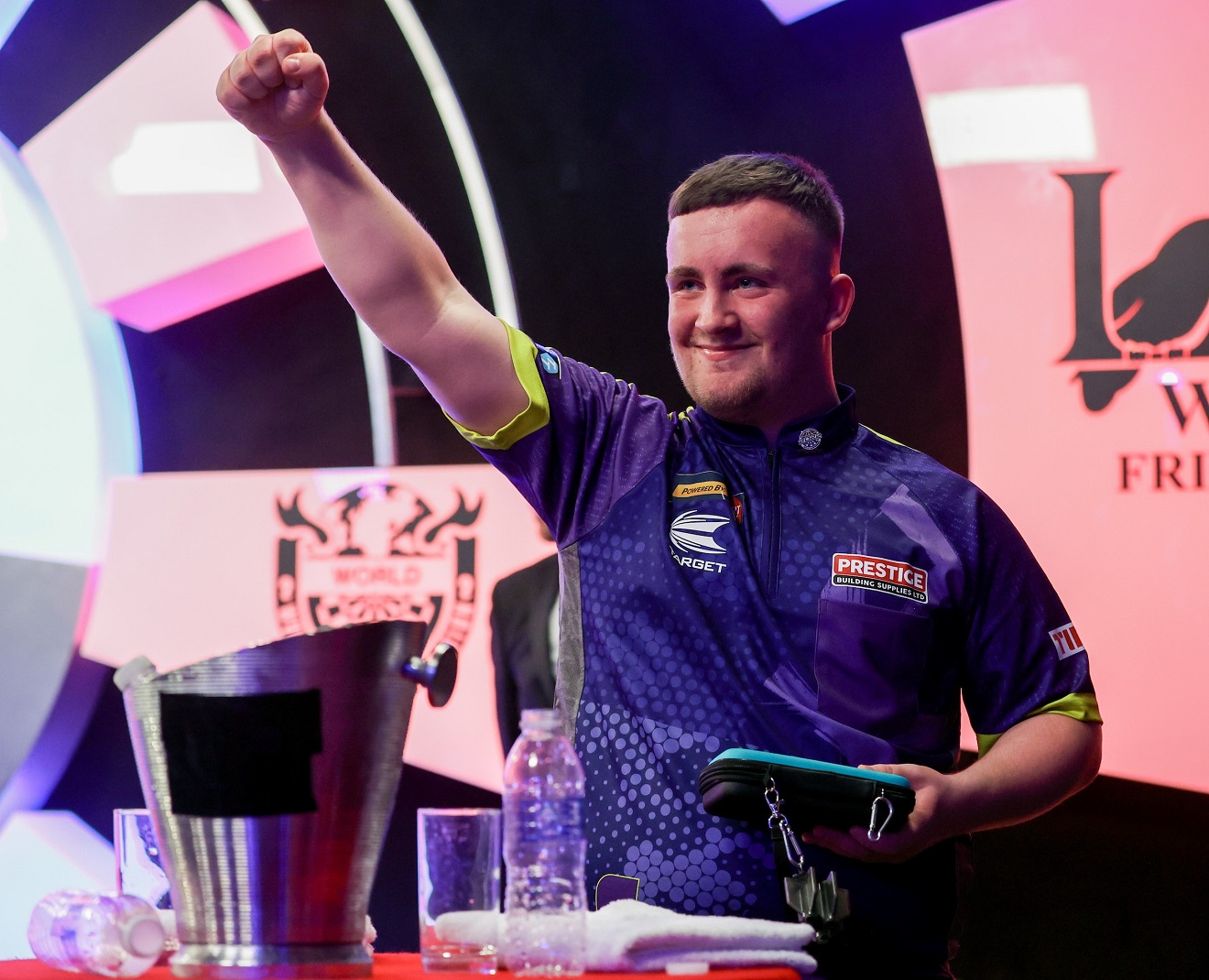 Luke Littler made history by becoming the youngest player to win a game in a senior World Championship as the second round of this year's tournaments got underway at Lakeside.
The 15-year-old showed why he's such a hyped prospect in his 3-2 victory over Ben Hazel but he didn't have it all his own way. Hazel took an early lead after winning the opening set before Littler turned on the afterburners and demonstrated why some people are tipping him to go make even more history and go all the way this week.
'The Nuke', averaged 118 as he won the second set 3-1 before wrapping up the third to nil to move within three legs of the match. Hazel dug deep to stay in it, though, forcing a decider by winning the fourth set 3-1. Littler, who finished the game with four maximums, ran away with it in the final set, producing checkouts of 100 and 126, his third and fourth ton-plus finishes of the match, to seal victory. 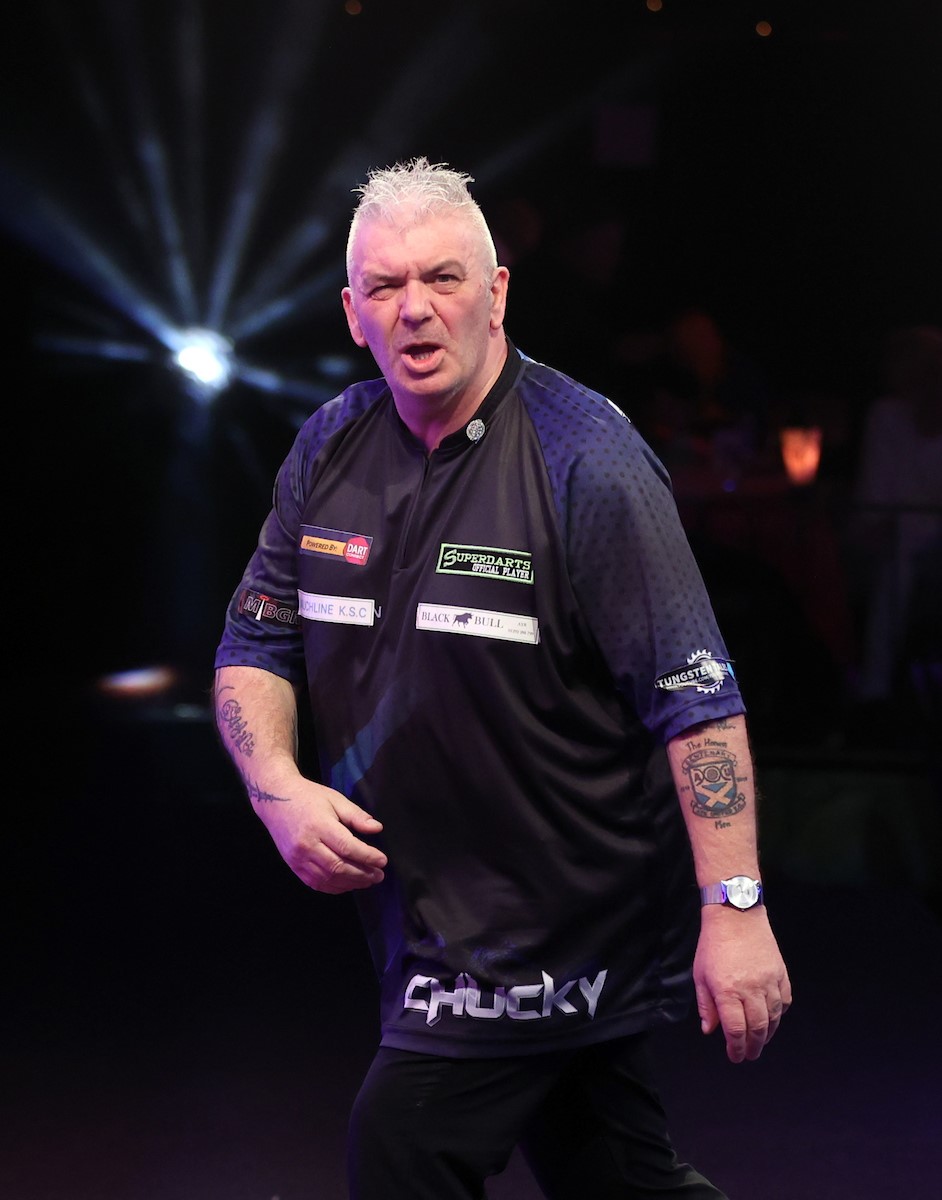 Although he didn't quite hit the same heights of his 101.32 average in the first round, Jim McEwan once again impressed as he defeated Aaron Turner 3-1.
Picking up from where he left off against Landon Gardiner on Saturday night, reigning British Classic champion McEwan won the opening set 3-0 in 49 darts. Local lad Turner didn't go down without a fight though, winning the third set with a trio of 17 darters. He was able to force the third set to a decider but couldn't close it out, McEwan winning that leg and then sealing the final set 3-1 with a brilliant 157 checkout. 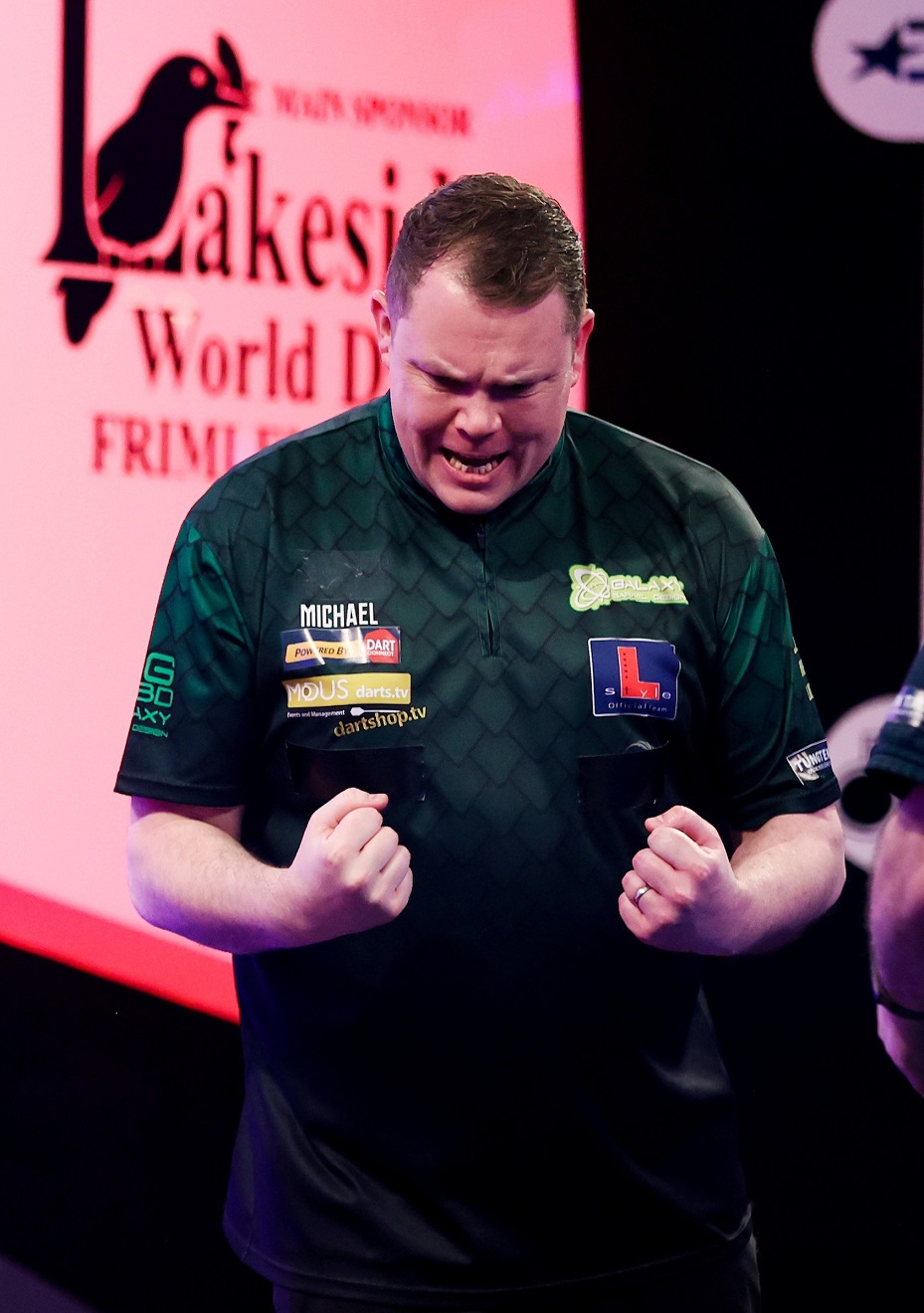 Up next for McEwan, who averaged 92.48 against Turner, is Wales' Mike Warburton, who came through an almighty tussle with Dave Prins 3-2 in the opening game of the session.
Both players were in good form going into the game, with Prins having beaten Mark Graham 2-0 on Saturday evening, and it showed with four of the five sets going all the way. 'Warby' led for much of the match, big finishes of 96, 117 and 164 demonstrating his superior accuracy on the outer ring, but Prins never went away and levelled things up at 1-1 and 2-2. 'The Badger' also produced a brilliant dart to force a deciding leg in the fifth set but Warburton took it on throw in 15 darts. 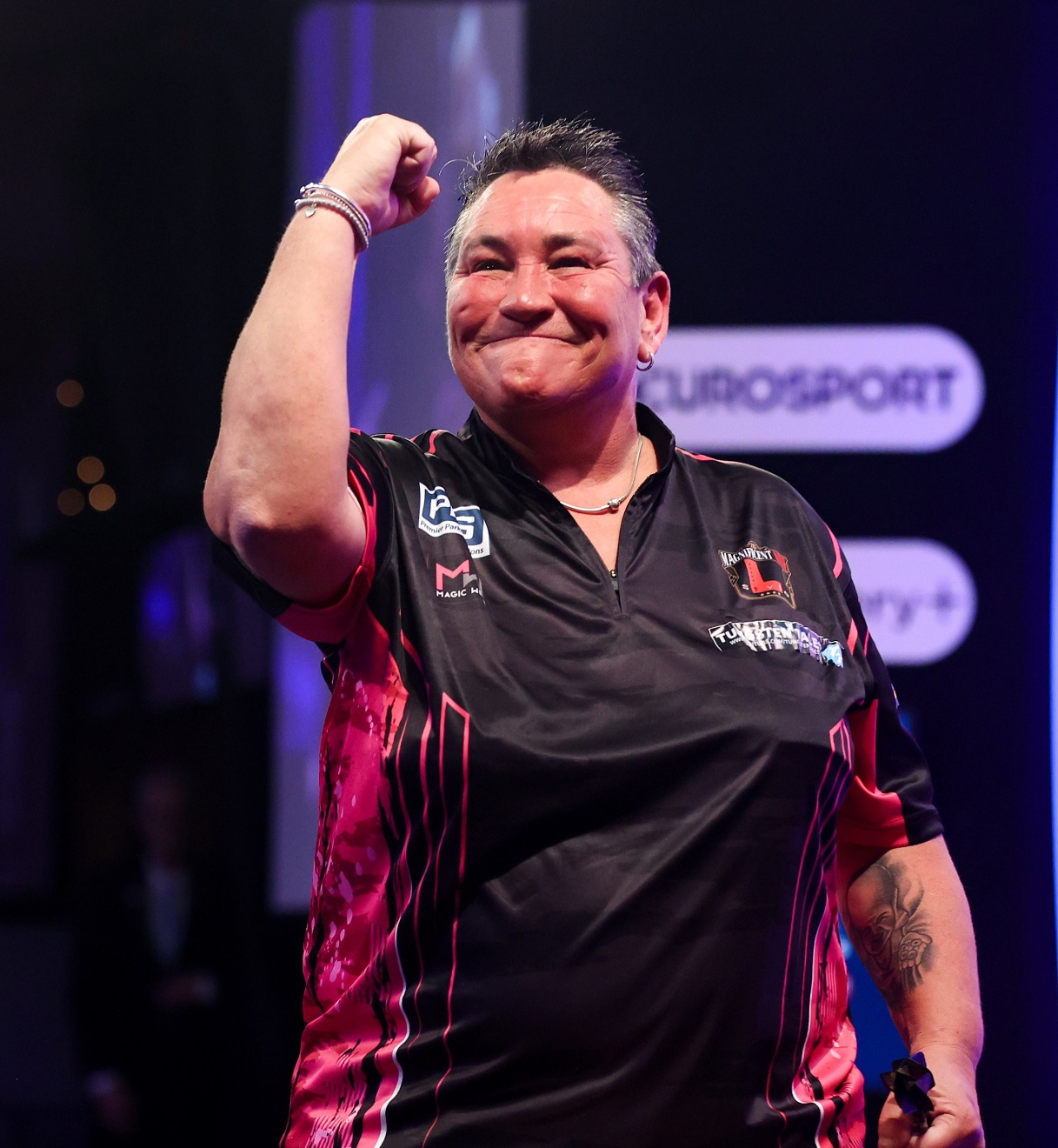 Former Lakeside semi-finalist Maria O'Brien survived a scare against Dutch qualifier Marjolein Noijens to become the first player to book their spot in the quarter-finals of the Women's 2022 WDF World Championships.
Noijens, who beat former England international Amanda Harwood in the first round on Saturday afternoon, started the game well, taking out of finishes of 38, 52 and 56 to win the opening set 3-1. O'Brien struggled to find her range in the opener but settled down after the break, winning the next two sets 3-1 and finishing with a 70.98 average. 'OB' will be back in action on Friday when she faces the winner of tonight's clash between Corrine Hammond and Rhian O'Sullivan in the quarter-finals. 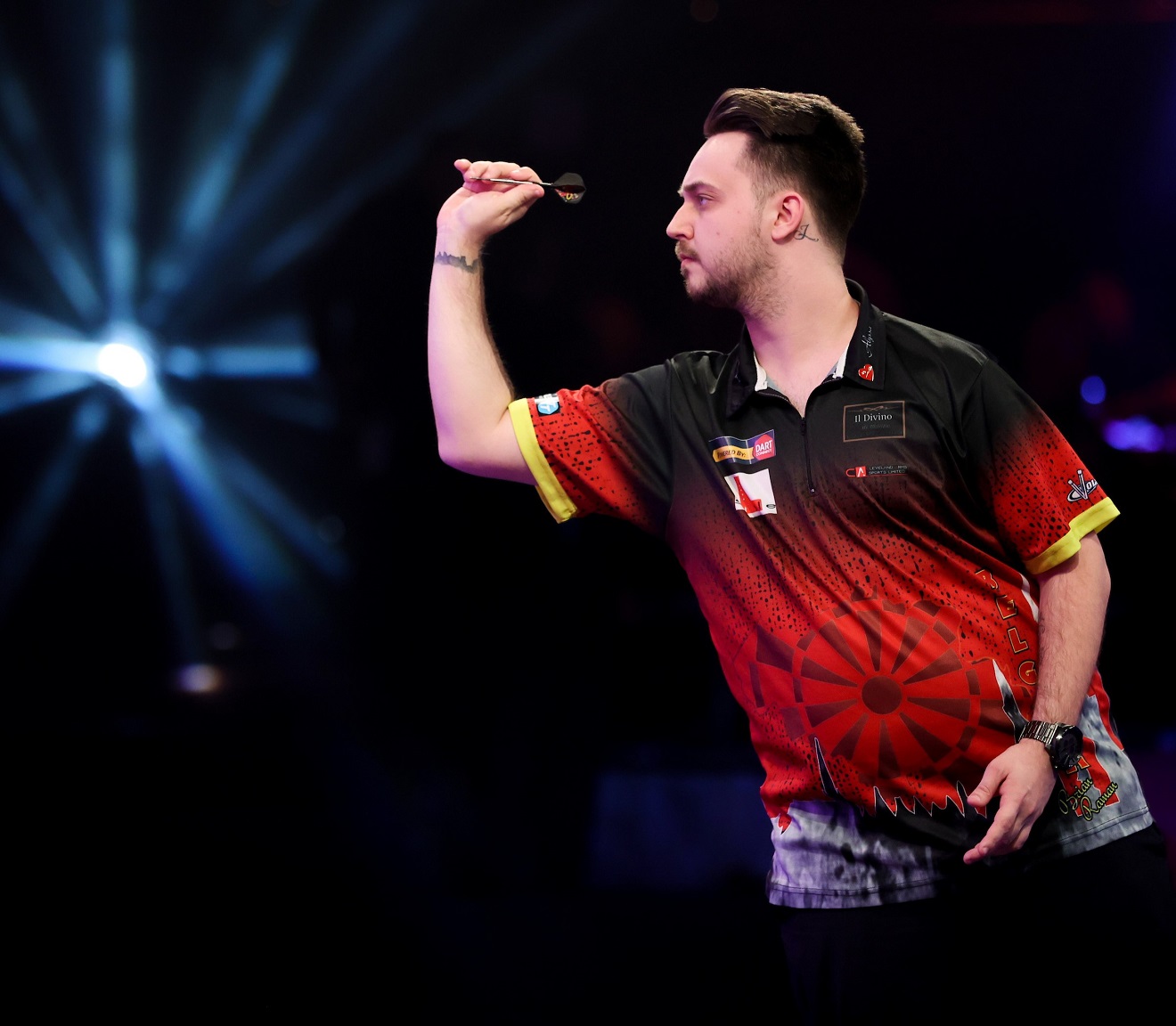 Top seed Brian Raman came through an absolute corker against Johnny Haines to win his Lakeside debut as the second round of the 2022 WDF World Championships continued.
The pair shared nine 180s and four ton-plus finishes in a 23-leg epic that was the best game of the tournament so far.
Despite initially finding himself two legs behind in the opening set, a run of six successive legs put Raman 2-0 up and within three legs of a place in the last 16. Haines, who played well to beat John Scott in the first round, dug deep to win the third set 3-2 before repeating the trick in the fourth to force a decider. The fifth also went the distance, Haines taking out big finishes of 101 and 92 to stay alive before Raman finally got over the line, kicking off the sudden death leg with a 180 before finishing it in 15 with a sensational 121 checkout.
Raman, who recorded a 92.61 average, will continue his title tilt in Wednesday evening's final game against Jarred Cole. 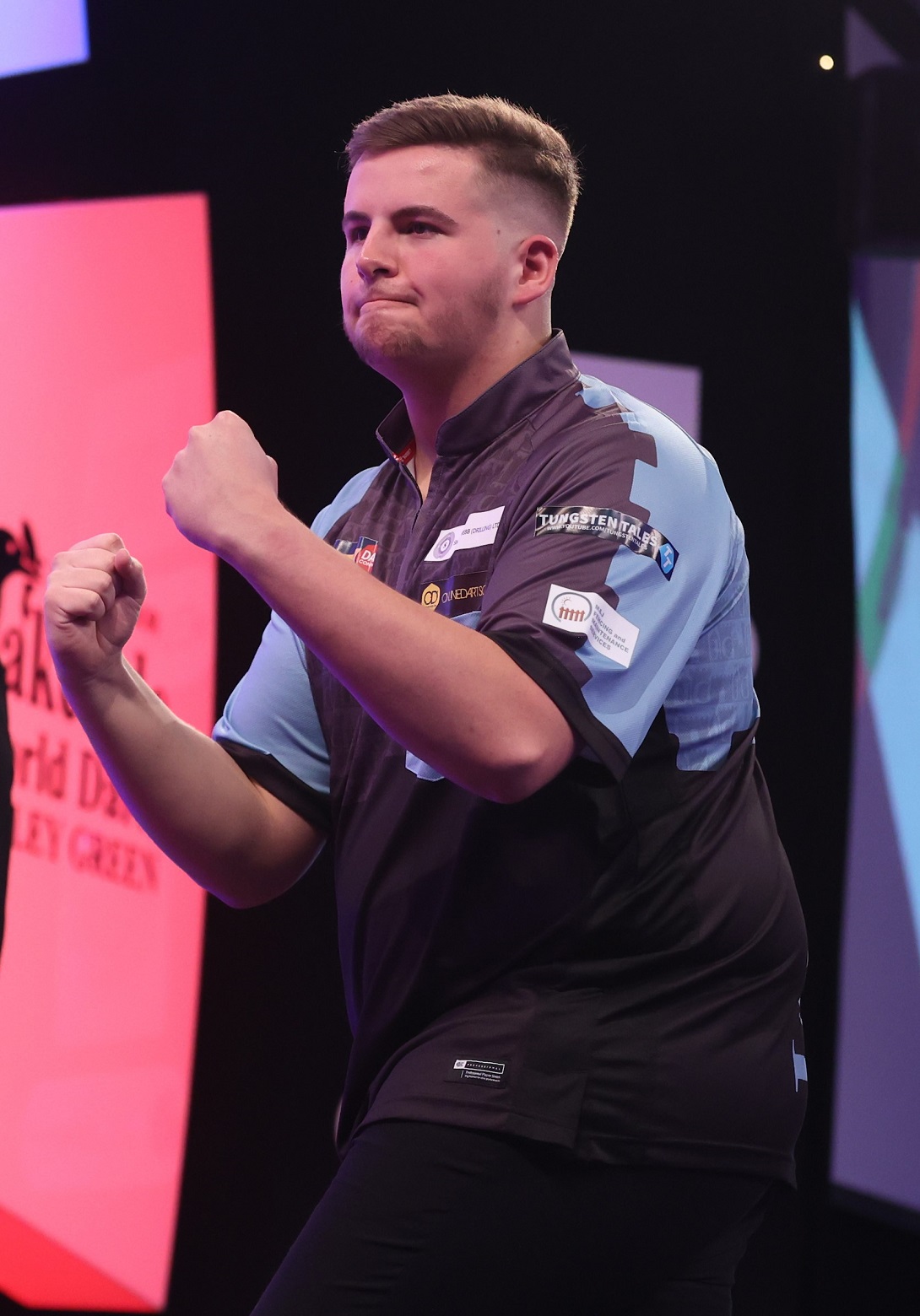 Cole followed up on his impressive win over Martin Adams in the tournament's opening game by defeating Antony Allen 3-0 to reach the last 16.
A big 156 checkout to break the Allen throw helped Cole win the first set 3-1 and he went one better in the second, taking the second set 3-0 in 50 darts and going six darts into a possible nine in the second leg. Cole's eight leg winning streak ended in the third set, Allen hitting double eight to stop the rot, but he eventually wrapped it up 3-1 to claim a comfortable victory.
Allen, who was making his debut after a series of impressive performances on the tour last year, didn't do a lot wrong but he was just had no answer for Cole's consistent power scoring. 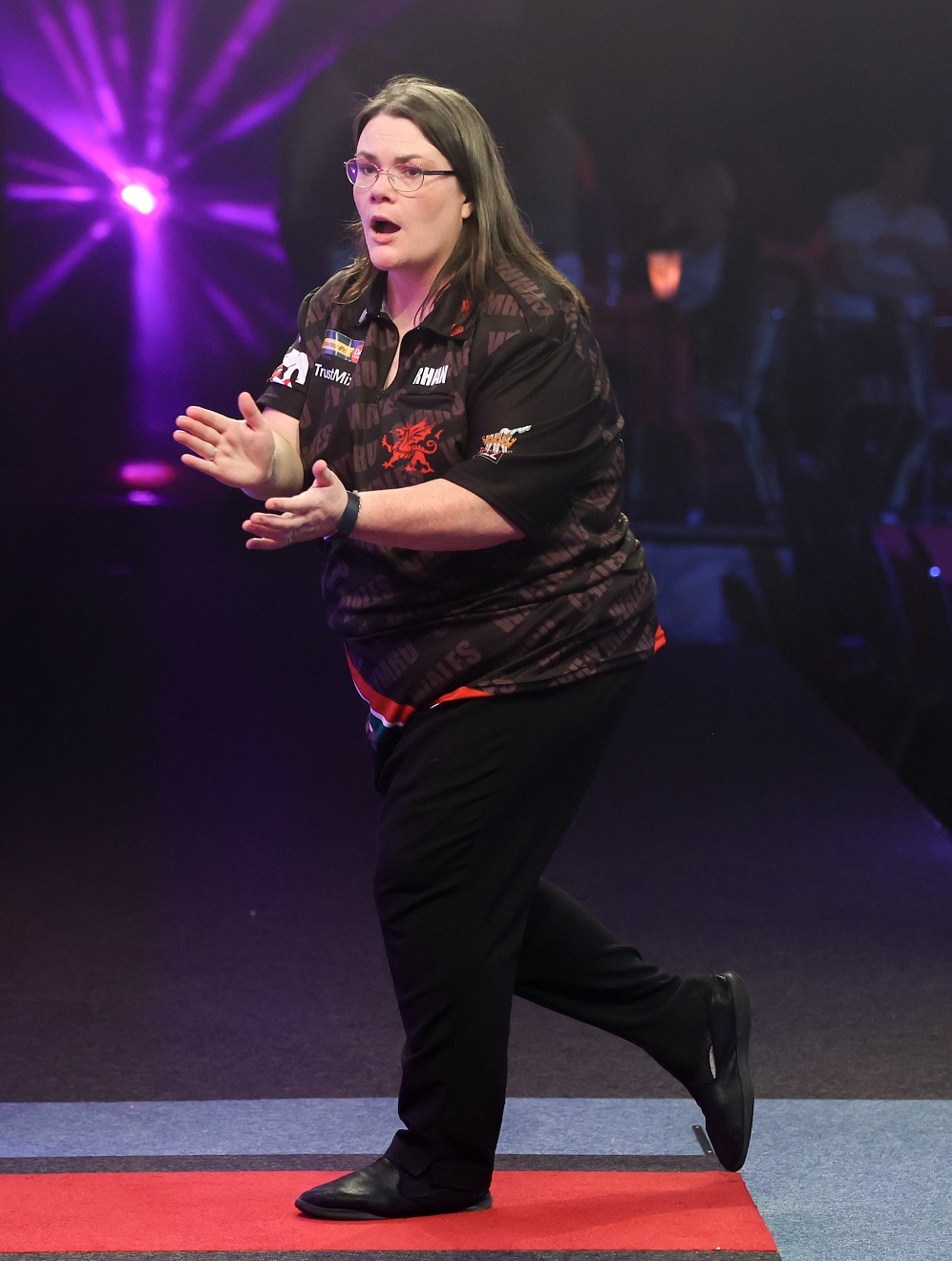 Rhian O'Sullivan continued her impressive comeback to Lakeside after a 10-year absence in the second game of the evening, defeating Corrine Hammond 2-1 in an entertaining back-and-forth tussle.
Despite making a slow start in the opening leg, successive finishes of 68, 32 and 40 saw O'Sullivan take the first set 3-1. The following two sets were identical, finishing 3-0 with legs won in 13, 20, and 21 darts. The first went the way of Hammond before O'Sullivan put her foot down to emerge victorious.
The Welsh captain will return on Friday with a spot in the semi-finals on the line when she faces Maria O'Brien. 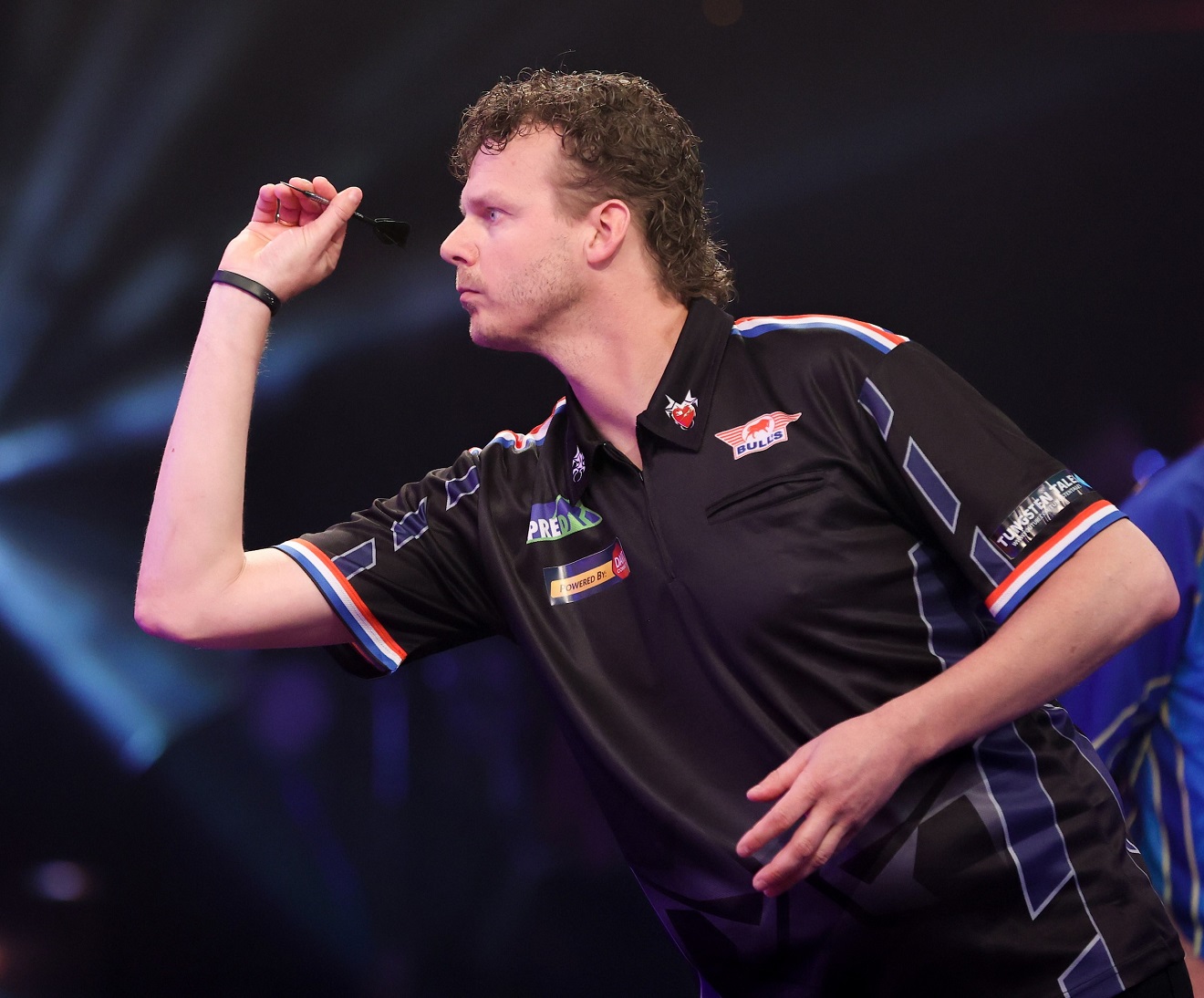 In the evening's other game, the 2016 Lakeside semi-finalist Richard Veenstra made a winning return to the World Championships against Romania's Laszlo Kadar.
Doubles provide elusive for both players for much of the match but it was the Dutchman Veenstra who always seemed to find the edge, winning nine of the 11 legs played to seal a straight sets victory.
'Flyers' will be looking to produce a better performance in the last 16 against teenage sensation Luke Littler, who averaged over 90 earlier in the day in his 3-2 win over Ben Hazel.