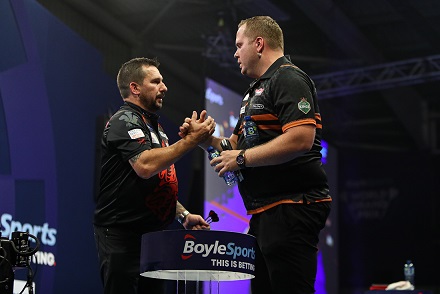 Clayton was handed a tough assignment against 2020 runner-up Van Duijvenbode in the unique double-start event, but recovered from a shaky start to book a showdown with Dimitri Van den Bergh at the Morningside Arena.
Van Duijvenbode dominated the opening exchanges, punishing a lacklustre start from the reigning champion to draw first blood with a sublime 156 checkout. Clayton's terrific 130 finish midway through set two shifted the pendulum, and as an increasingly frustrated Van Duijvenbode faltered late on the Welshman capitalised to move through to a meeting against Van den Bergh.

"I'm glad to get through obviously, but Dirk should have won that game," conceded Clayton, who defeated Gerwyn Price in last year's showpiece. "I just couldn't get going tonight, but thankfully I managed to scrape through. "Dimitri is a brilliant player, just like Dirk. Hopefully my game will improve on Wednesday. I'm going to come out of the blocks better than I did tonight." 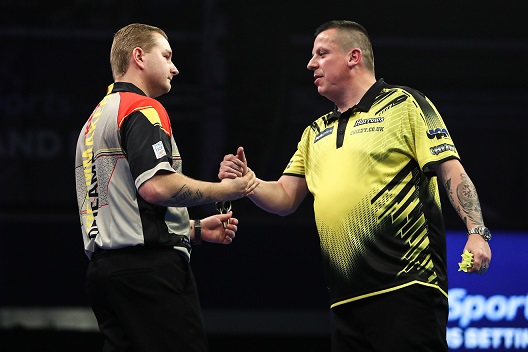 Van den Bergh secured only his second victory on the World Grand Prix stage with a deciding-leg win over two-time finalist Dave Chisnall, who bows out in round one for the first time since 2014.
Chisnall - a winner at the recent Belgian Darts Open - recovered from a sluggish start to force the first deciding set of this year's tournament, producing a brace of 160 starts in the process. The pair exchanged four straight holds in set three to create a thrilling finale, but it was Van den Bergh who booked his spot in the second round, courtesy of a fine 13-dart hold in the decider. 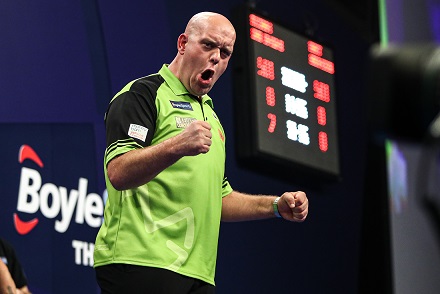 Elsewhere, Van Gerwen - chasing a sixth World Grand Prix success - ran out a resounding 2-0 winner against two-time World Champion Gary Anderson in a repeat of the 2016 final.
The Dutchman reeled off a scrappy first set without reply, despite Anderson missing darts to win every leg - squandering 11 darts at double in total. The Scot responded with a clinical 84 kill to seize control of the second set, but after firing back with a 15-dart riposte, Van Gerwen followed up his third 180 with a 106 finish to seal the deal in 12 darts.

"The first round at the World Grand Prix against Gary Anderson is never going to be easy," admitted Van Gerwen, who averaged 101 in a superb second set display. "You never know with Gary. He still has a lot of talent and is a brilliant player, so you have to perform well. "We both missed so many doubles in the first set, but the second set is something to build on for the next round." 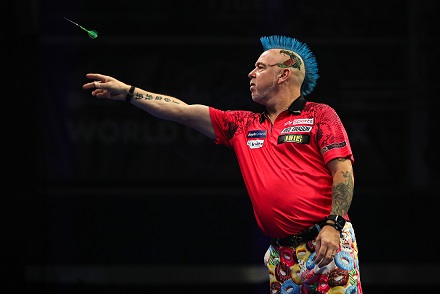 World Champion Peter Wright defied a spirited fightback from Kim Huybrechts to begin his bid for a maiden World Grand Prix crown with a 2-0 win in a high-quality affair.
After defying a significant disparity in the averages to win the first set, Wright moved 2-0 ahead in the second, only for Huybrechts to preserve his hopes with skin-saving 128 and 101 checkouts. However, the Belgian was unable to conjure up a third consecutive ton-plus finish to force a deciding set, and 2018 runner-up Wright regained his poise to pin double nine and advance with a 94 average. 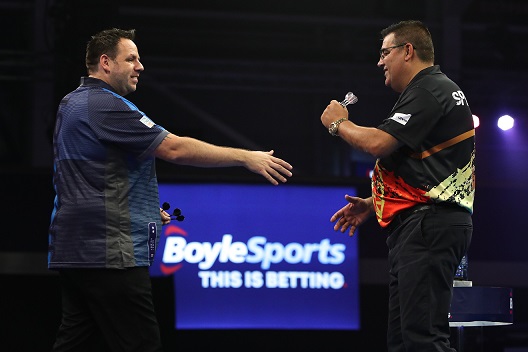 2010 finalist Adrian Lewis made a winning return in his first World Grand Prix appearance since 2019, converting three ton-plus checkouts to close out an impressive 2-0 win over Jose De Sousa, who becomes the first seed to exit this year's tournament.
Two-time World Champion Lewis took out 152 and 101 to claim the first set, and a brilliant 147 finish sparked his revival in the second, as he reeled off three straight legs to prevail. 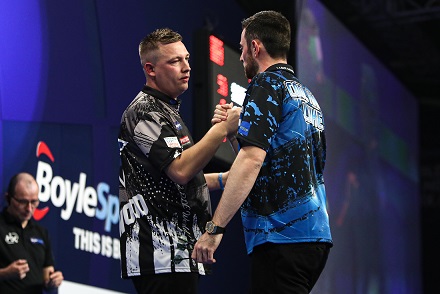 The Stoke-on-Trent star will now play Chris Dobey, who produced a spectacular display of finishing to stun Luke Humphries and secure his first win at this event since reaching the 2019 semi-finals on debut.
Humphries paid the price for squandering 20 darts at a starting double in a dramatic opening stanza, as Dobey rallied from 2-0 down to snatch the set with an inspired 94 outshot, secured via two double 19s. Dobey continued his Hollywood finishing with successive 136 and 138 checkouts to move to the brink of victory, and he made it six legs without reply to triumph with a 91 average. 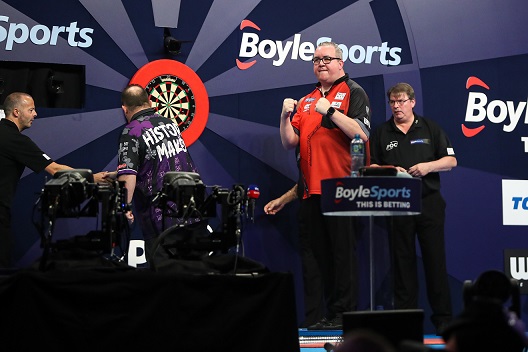 Two-time semi-finalist Stephen Bunting will play Van Gerwen in Wednesday's last 16, after producing a blistering burst in the latter stages of his clash against 2011 runner-up Brendan Dolan.
Bunting drew first blood in a tight opening set which saw all five legs go with throw, before wrapping up proceedings with a stunning 11-darter to complete a straight-sets success. 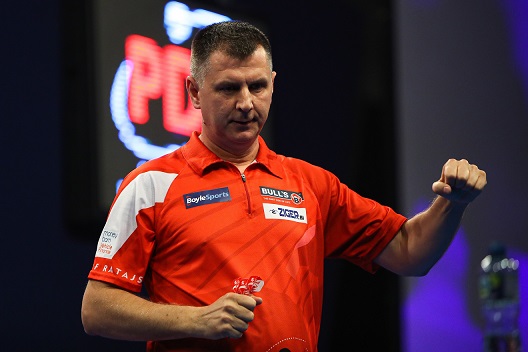 Meanwhile, Poland's number one Krzysztof Ratajski will play Wright for a place in the last eight, after kicking off this year's tournament with a convincing 2-0 victory over Callan Rydz.
Ratajski converted all three of his attempts at a finishing double to claim a hard-fought opening set, before punishing a series of missed opportunities from Rydz in the second to ease through.