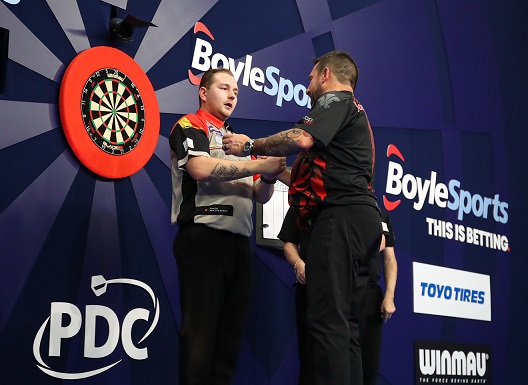 Another marathon night at the Morningside Arena saw all four matches go to deciding sets, with Michael van Gerwen, Peter Wright and Chris Dobey also winning through to Friday's quarter-finals.

However, Van den Bergh stole the headlines with an impressive all-round display, as the former World Matchplay winner secured his first quarter-final appearance in the double-start event.
Clayton hit the front with a clinical display of combination finishing - including a brace of 72 checkouts and a two-dart 92 outshot - before Van den Bergh levelled the tie with a 93 average in set two. The Belgian was dominating proceedings and he underlined his superiority in set three, converting 113 and 153 checkouts to move a set away from the last eight. Van den Bergh then landed a 112 finish on tops to move a leg away from victory, but Clayton refused to surrender his crown without a fight, surviving match darts in successive legs and taking out 104 en route to wrapping up set four. The Welshman struck the first blow in set five, but Van den Bergh arrested his slide with a crucial 110 checkout, before following up a 15-dart break with a superb 174 set-up shot, as he pinned double 16 to progress.

"I felt a whole lot of emotions. Nerves, confidence, happiness, frustration. All that was part of this game," reflected Van den Bergh. "I've had two great games and I'm feeling good. I'm so proud that I'm into the quarter-finals - my best run ever. I'm not scared of anybody and I just want to keep doing what I'm doing." 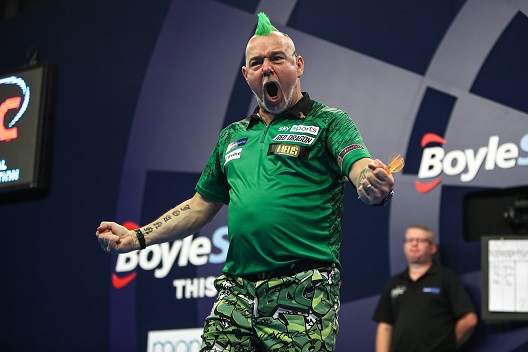 Van den Bergh will now renew his rivalry with Peter Wright in the last eight, after the World Champion produced a stirring fightback to deny Krzysztof Ratajski in another five-set affair.
Wright - a runner-up in 2018 - reeled off six consecutive legs to storm through to the quarter-finals, landing eight maximums to maintain his bid for a first double-start success.
Ratajski missed one set dart at tops in the opener as Wright drew first blood at the seventh attempt, although the roles were reversed when the Scot squandered four opportunities for a 2-0 cushion. Ratajski kept his cool in the third to edge 2-1 ahead, yet after reverting to the set-up that won him the opening set, Wright clinched set four without reply to set up a thrilling finale. The world number two continued his charge in the closing stages, registering 180s in each of the last three legs to complete the comeback with legs of 14, 16 and 15 darts.

"This tournament is not on my CV yet," said Wright, who will regain the world number spot ahead of Gerwyn Price if he reaches Sunday's final. "I got to the final many years ago against Michael van Gerwen - when Michael was at the top of his game. It doesn't get any easier [in the quarter-finals], but I can beat anyone with any darts." 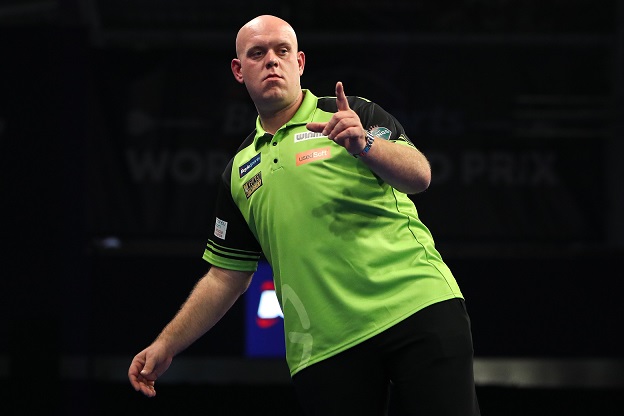 Elsewhere, five-time champion Van Gerwen defied a spirited display from Stephen Bunting to complete a battling 3-2 victory and continue his chase for a sixth World Grand Prix crown.
Van Gerwen averaged 94.35 and crashed in six 180s to secure a tenth consecutive win over Bunting, and the 33-year-old remains on course to claim a third televised ranking title of 2022. Bunting defied a 12-point gap in the averages to snatch the opening set, converting a clinical 102 kill before profiting from Van Gerwen fluffing four darts for the lead. Van Gerwen responded with a spectacular 141 finish to kick off set two, and that provided the spark for the Dutchman, who also took out 150 to extend his winning run to seven legs. Bunting produced a remarkable display of brinkmanship to halt Van Gerwen's charge, following up his third 180 with a 15-dart break in a fourth-set decider to prolong the drama. Van Gerwen regained control with back-to-back 180s in the early stages of set five, and while Bunting refused to relent, the third seed followed up successive 140s with a 65 checkout to triumph.

"It means a lot to me. It was a really good battle and I'm glad I was able to keep my focus going," reflected Van Gerwen, a Premier League and World Matchplay winner earlier this year. "I know there is more in the tank, but I have to work harder and I need to make sure I don't give my opponents chances early on, and that's what I have to improve in my next game." 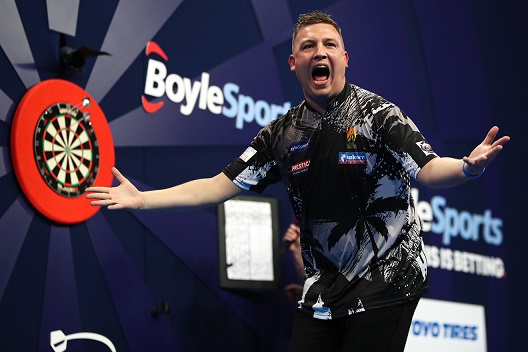 Van Gerwen will face Chris Dobey in Friday's quarter-finals, after the 2019 semi-finalist edged out Adrian Lewis in a dramatic sudden-death leg to kick off Wednesday's action.
Dobey was forced to survive a match dart at bull in a dramatic decider, but after spurning two match darts of his own in the penultimate leg, he made amends to seal victory with a nerveless 100 kill.
Lewis had raced into an early lead after reeling off the first four legs without reply, only for Dobey to return the favour, recovering from a nightmare start to restore parity at one set apiece. Dobey's superb 111 skin-saver midway through set three catapulted him into a 2-1 lead, but Lewis fought back valiantly, converting a 120 finish en route to setting up a fifth and final set. The pair exchanged holds in a dramatic conclusion to the contest, but after fluffing his lines in leg four, Dobey regained his poise to prevail with his second ton-plus checkout of the tie.

"I'm just relieved to get over the line," admitted Dobey, who is eyeing a place in his third televised semi-final. "I've had so many battles with Adrian and I've got a good record against him, so I came up here full of confidence. He's a fantastic player, and I'm over the moon to get through."

The second round draws to a close on Thursday night, featuring a clash between top seed Gerwyn Price and Masters champion Joe Cullen, while Danny Noppert and Nathan Aspinall collide in a battle of the UK Open champions. 2017 champion Daryl Gurney takes on Latvian debutant Madars Razma, while Martin Lukeman and Ross Smith lock horns in Thursday's curtain-raiser.