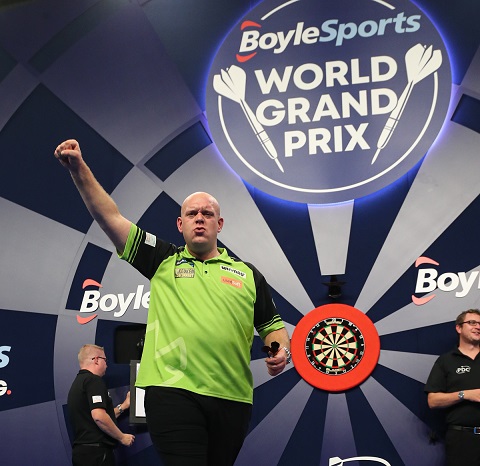 Van Gerwen averaged 99.30 and landed five ton-plus finishes to continue his bid for a sixth double-start title, setting up a blockbuster semi-final showdown against World Champion Wright at the Morningside Arena.
Saturday's mouth-watering semi-final line-up in Leicester will feature three of the world's top four, with 2020 champion Price set to take on Aspinall in the other semi-final.
However, it was Van Gerwen who reaffirmed his credentials with a sparkling display, registering six perfect 160 starts as he recorded a tenth consecutive victory over Dobey. The 33-year-old raced into a 2-0 lead in the opening set with legs of 12 and 13 darts, and though Dobey rallied to force a first set shoot-out, the Dutchman fired in a second 180 to seize the early initiative. The roles were reversed in set two, as Dobey defied a fightback from Van Gerwen to restore parity with a sublime 122 combination, with the Dutchman poised on a two-dart outshot. Van Gerwen regained the lead in sensational style, following up an 11-darter with 118 and 109 checkouts to wrap up set three with a remarkable 112 average. The three-time World Champion was relentless on the outer ring throughout the contest, and he capped off a dominant display with a show-stopping 105 checkout, sealed with successive double tops.

"I think I'm playing really well in this tournament," said Van Gerwen, who defeated Gary Anderson and Stephen Bunting in reaching the quarter-finals. "My tops is going in really smoothly and that gives you a lot of confidence. I feel phenomenal but you have to keep doing it. "I've been working really hard so I'm over the moon. If Peter continues to play like he did tonight it will be a walkover, but we all know that Peter won't play like that." 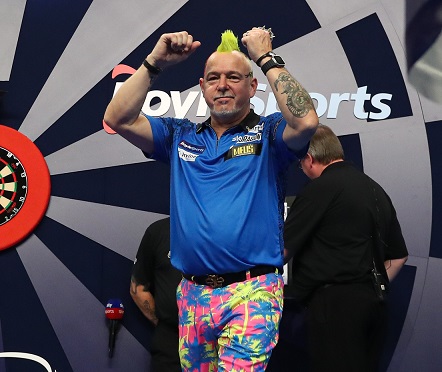 Van Gerwen will now renew his rivalry with Wright in a repeat of the 2018 final, after the Scot survived three match darts in a gripping sudden-death decider to edge out Dimitri Van den Bergh in an epic contest.
Wright squandered seven match darts of his own in an incredible climax, but he was handed a reprieve when Van den Bergh wired three match darts at double 12, before eventually pinning double ten to prevail.
The World Champion made a blistering start to the tie, following up a ten-darter - the best leg of this year's tournament so far - with a 130 checkout to complete a clean sweep in set one. Wright then produced a sparkling 144 finish to move to the cusp of a two-set lead, only to fritter away three darts at tops to double his tally, and Van den Bergh capitalised to draw level. Van den Bergh closed out a scrappy third set to move 2-1 ahead in the match, before Wright defied a spectacular 148 checkout from the Belgian to wrap up set four and preserve his title hopes. The 52-year-old began set five superbly, producing a brace of 160 starts to forge into a 2-0 lead, yet he handed Van den Bergh an unexpected lifeline in leg three with a trio of missed match darts. The 28-year-old forced a last-leg shoot-out, but it was Wright who prevailed in a nerve-jangling conclusion, which saw both players spurn opportunities before the Scot eventually sank his eighth match dart to progress.

"I could have won the match earlier. I missed opportunities and Dimitri punished me," admitted Wright, who avenged his defeat to Van den Bergh at the same stage of July's World Matchplay. "I didn't think Dimitri was going to miss those match darts, so I'm thankful I had another chance, and I cannot wait for the semi-finals. It will be another fantastic match." 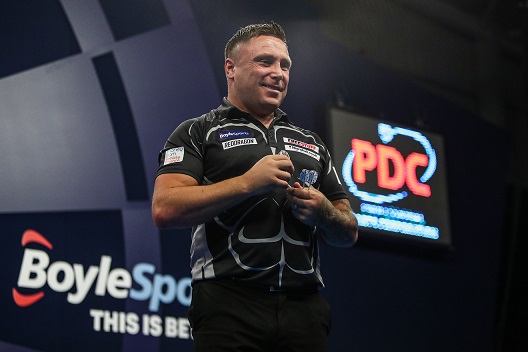 Elsewhere, top seed Price continued his bid for a second double-start crown with an emphatic 3-0 win over Madars Razma, dropping just two legs en route to victory.
Razma was unable to replicate the impressive performance he produced in dumping out 2017 champion Daryl Gurney on Thursday, and Price duly profited to breeze through to the last four for a third straight year.
Price fired in a 14-darter to wrap up a subdued opening set, before powering to the second set without reply as Razma struggled to make any inroads. The Latvian claimed his second leg of the contest in the early stages of set three, but this only proved to be a temporary reprieve, as Price produced 107 and 116 finishes in consecutive legs to complete the whitewash.

"I thought I played okay. I wasn't at my best, but Madars was way off the pace," admitted Price, who averaged 91.28 and landed 52% of his attempts at a starting double. "I'm glad I got through 3-0, but I know it's going to be a tougher game against Nathan in the semi-finals. "Every time we play it's always a tough game, but in the last couple of games we've played I've come out on top, so hopefully it's the same tomorrow." 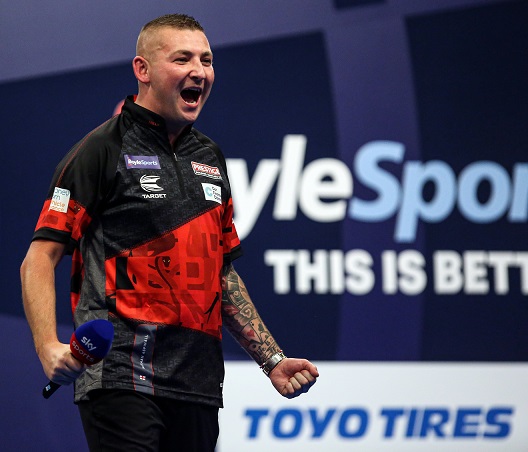 Aspinall secured a spot in his maiden World Grand Prix semi-final with a hard-fought 3-2 victory over debutant Martin Lukeman in Friday evening's opener.
After kicking off proceedings with a 113 checkout, Aspinall drew first blood with a two-dart 64 combination, only for Lukeman to level in a tight second set - taking out a superb 147 along the way. The former UK Open champion regained the initiative with an imperious third set display, featuring a 138 checkout plus legs of 14 and 13 darts, but a tenacious Lukeman refused to relent, edging a fourth set decider to prolong the drama. Aspinall was dominating the averages - underlined by a magnificent 11-darter to open set five - and he eventually broke Lukeman's resistance with a clinical 71 kill on tops to book his place in Saturday's semi-finals.

"It was a fantastic game, but I think I was the deserved winner," reflected Aspinall, who averaged 90, posted five 180s and converted 13 of his 25 attempts at a finishing double. "I'm in the semi-finals for the first time - it's absolutely brilliant. Fair play to Martin - considering he is new to the scene, he doesn't feel the pressure, and I knew I had to play well tonight."

2020 winner Price remains the betting favourite with sponsors BoyleSports at 6/4 going into the semi-finals, with Van Gerwen rated at 9/4 to claim his sixth double-start title. Wright is 11/4 as he targets a first World Grand Prix triumph, while Aspinall is the 6/1 outsider of the remaining four stars.