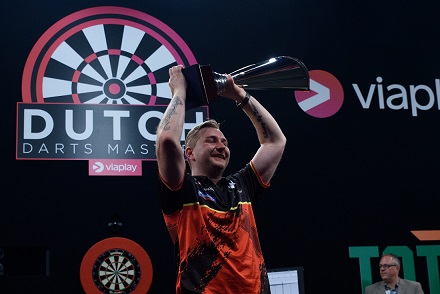 Van den Bergh had won his maiden World Series title a fortnight ago in the Nordic Darts Masters at Forum Copenhagen, and he doubled his tally in style with a dominant showing at the Ziggo Dome.
Having dropped just two legs in his first round win over Ron Meulenkamp on Friday, the Belgian averaged almost 99 in a 6-1 quarter-final romp against Jermaine Wattimena. He then powered past UK Open champion Danny Noppert 7-2 in the semi-finals and opened up a 4-0 lead over Van Duijvenbode in the final to move half-way to victory. The Dutchman hit back in leg five, but Van den Bergh finished 72 for a 14-darter and then pinned double 18 to move 6-1 up. Van den Bergh saw Van Duijvenbode double his tally in leg eight, despite landing two 180s in the leg, but the Belgian wrapped up proceedings in emphatic style, firing in legs of 13 and 14 darts to prevail with a 104 average.

"It's incredible - I'm very proud," said Van den Bergh. "To only lose seven legs in the event is amazing. "It's incredible and it's not expected. I don't know if I've broken records but I've got the trophy and that's what I came here for. "I think I've done a great job in Copenhagen and here and I'm grateful to be invited to play in these World Series events. "This is the top players in the world and I've won two out of two, so I want to take this into the World Matchplay next month now. "I'm so happy because I keep achieving my dreams. I want to keep continuing this because it's an incredible feeling. I want to achieve more."
Having seen off four Dutch stars in as many games at the Ziggo Dome to silence the home crowd, he added: "I didn't only play Dirk and the class that Dirk has, but I've also had to play the massive support he had. "I understand them and I respect Dirk so much. It wasn't hard to play the opponent, I had to be so strong in my mind." 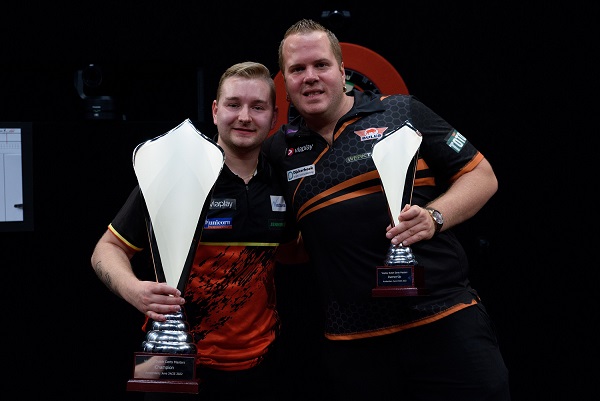 Van Duijvenbode had produced a superb 72 finish in the deciding leg of his entertaining semi-final contest with James Wade, who had checked out a sublime 140 to lead 6-5 before seeing the Dutchman claim the final two legs. The World Cup semi-finalist had also seen off Martijn Kleermaker 6-4 in the quarter-finals, having knocked out World Champion Peter Wright in the first round, but admitted after the final: "I was just not good enough.

"He played well but I think I could have done better than I did and I'm disappointed that I didn't play a good game. "I felt great but I felt a little bit unlucky sometimes. It's amazing - I love playing for a crowd that is supporting you as much as they did. "I'm disappointed I didn't win it, but I could have done worse this weekend. This is the last TV tournament before the [World] Matchplay and I feel ready. Hopefully I'll get another gear for that one - let's go!"

Dutchmen Maik Kuivenhoven and Vincent van der Voort also lost out in the last eight to Wade and Noppert respectively, with six of the eight players from the Netherlands having won through to the second day of action in Amsterdam.