WRIGHT EASES THROUGH IN BLACKPOOL AS RODRIGUEZ STUNS CLAYTON

Peter Wright began the defence of his Betfred World Matchplay title with victory over Madars Razma as debutant Rowby-John Rodriguez dumped out eighth seed Jonny Clayton on a thrilling opening night at the Winter Gardens. 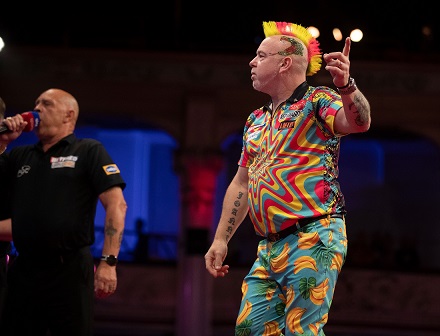 Wright is aiming to become just the fourth player in World Matchplay history to retain the coveted Phil Taylor Trophy, and he eased through to round two with a routine 10-4 win over debutant Razma.
The world number one punished a sluggish start from the Latvian to race into a 5-0 lead, landing a brace of 13-darters and converting a clinical 100 kill during the opening session. Wright, who averaged 97 and fired in seven 180s, stretched his lead to 8-2 before Razma hit back with consecutive 14-darters, but a sublime 157 checkout in the penultimate leg catapulted him to a resounding victory.

"The crowd were fantastic, and it's great to be back at the Winter Gardens," said Wright, who now plays Krzysztof Ratajski for a place in the quarter-finals. "There are loads more 180s to come, maybe nine-darters as well. I believe I will win it again. "Krzysztof is a fantastic player, but it doesn't matter what player turns up, they've got to be consistent from the first leg until the last, and there's not many players in this tournament that can do that." 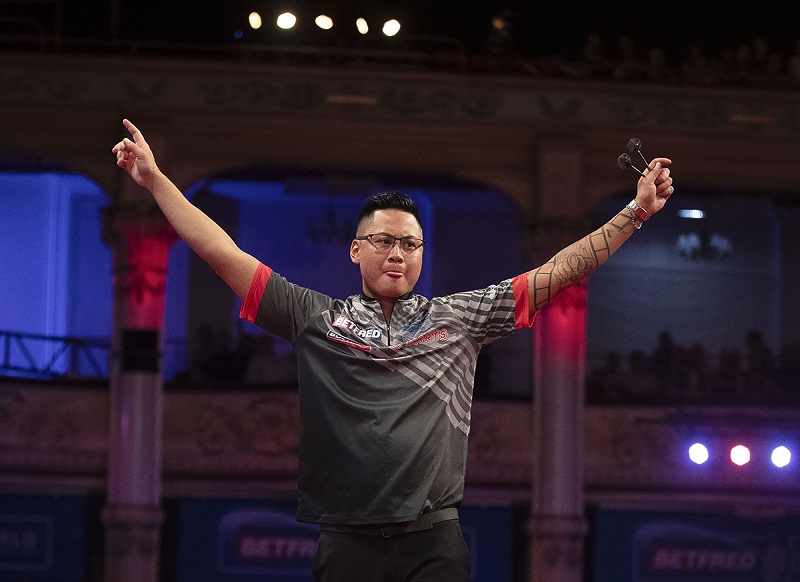 It was Rodriguez who produced arguably the performance of the night, averaging 99 to complete a 10-7 success against Clayton, who becomes the first seed to exit this year's tournament.
Rodriguez trailed 3-2 at the first interval despite averaging in three figures, but the Austrian was unfazed, reeling off three consecutive legs to seize the initiative. Clayton stopped the rot with a superb 130 finish in leg nine, but that was usurped by a stunning 156 combination from Rodriguez moments later, before he then held throw in leg 11 to establish a three-leg buffer. The Welshman - playing despite the discomfort of a blocked tear duct in his right eye - continued to battle away valiantly, and although Rodriguez spurned two match darts for a 10-6 win, the former World Cup runner-up hit back with a tidy 13-dart hold to seal the deal.

"I am confident. I'm in really good form at the moment, and in my mind I can beat anybody," claimed Rodriguez, who will take on Dimitri Van den Bergh in a mouth-watering last 16 tie. "Dimitri is one of my best friends. We will have a great game, and the better player will win on the day." 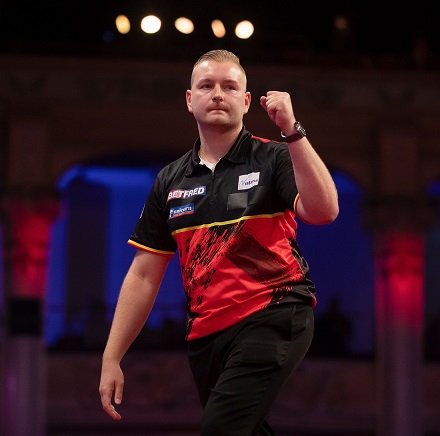 Van den Bergh sent out a statement to his title rivals at the Winter Gardens by powering past Callan Rydz to kick off his bid for a second World Matchplay crown.
The 2020 champion - a runner-up 12 months ago - landed a World Series of Darts double in Copenhagen and Amsterdam last month, and he maintained that sparkling form with an emphatic 10-2 victory over World Championship quarter-finalist Rydz. Van den Bergh raced into a commanding lead following a blistering start, which saw him land four 180s and produce legs of 11 and 12 darts to storm 4-1 ahead with a 108 average. Rydz doubled his tally with a 14-darter, but a 116 finish from Van den Bergh in leg seven sparked a run of six consecutive legs, before the ninth seed sealed his progression with a spectacular 137 finish.

"I'm very proud of the way I played today, especially with the level of opponent I was up against," said the Belgian, who averaged 100 and converted ten doubles from 14 attempts. "The crowd are amazing. Every time I hear them singing my name, it makes me so happy. I'm here to do a job, I'm here to chase my dream, and I cannot wait for my next match." 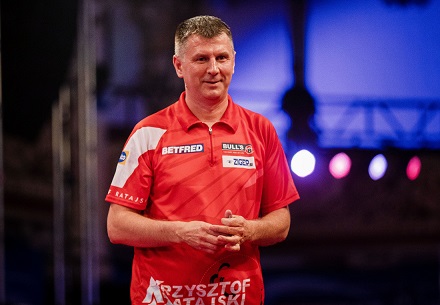 Elsewhere, Ratajski opened this year's tournament with an impressive 10-6 win over former Lakeside Champion Stephen Bunting, averaging 98.43 to continue his impressive record at the Winter Gardens after reaching the 2021 semi-finals.
The pair exchanged early breaks of throw in a nervy start to proceedings, but a brace of 180s in leg three steered Bunting into a 3-2 lead at the first interval. Ratajski responded by winning four of the next five legs following crucial misses at double from Bunting in leg nine, and back-to-back 15-darters saw the Polish number one extend his cushion to 8-4. Bunting fired in back-to-back 180s en route to an 11-dart break as he threatened an unlikely comeback, only for Ratajski to reply with an 11-darter of his own, followed by 90 finish to cap off a classy display.

"It was a good game. Stephen put me under pressure throughout, but I'm really happy," reflected Ratajski, the number 16 seed. "I feel really good and now I am playing at a high level. I believe I can play much better, and I expect to produce this in the next few matches."