VAN GERWEN BATTLES PAST LEWIS AS ANDERSON CRASHES OUT

Michael van Gerwen marked his big stage return with victory over Adrian Lewis in his Betfred World Matchplay opener on Sunday night, as 2018 champion Gary Anderson crashed out on Day Two in Blackpool. 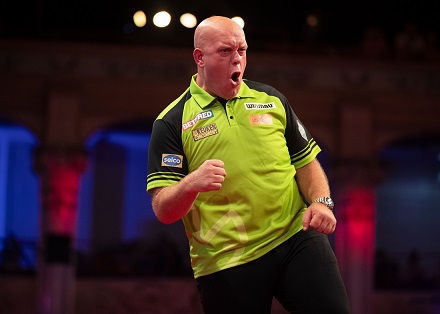 Van Gerwen was making just his second appearance since undergoing surgery on his throwing arm last month, and he defied a below-par display to claim a 10-7 victory over 2013-runner-up Lewis at the Winter Gardens.
Van Gerwen opened his account with a brilliant 126 on the bull for a 12-dart hold, but Lewis delivered a 13-dart riposte, sparking a sequence of three straight legs for the Stoke-on-Trent star. The two-time World Matchplay champion regained control with three consecutive legs of his own, though Lewis refused to relent, levelling proceedings at six apiece courtesy of a sublime 11-dart hold. The Dutchman was visibly struggling for consistency, yet Lewis' doubling unravelled in the latter stages, and Van Gerwen duly capitalised, winning four of the final five legs to keep his hopes of a third Blackpool crown alive.

"At this stage, the most important thing is to win your first game," said Van Gerwen, who now plays Joe Cullen, in a repeat of last month's Premier League final. "It was tough. I think my doubles were the key, but I have to forget this game really quickly. There were no winners in this game to be fair." 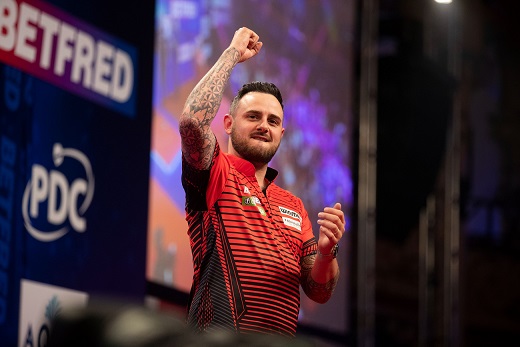 Cullen stormed into the second round with a comprehensive 10-2 victory over World Cup winner Damon Heta, reeling off nine straight legs midway through the match to dismantle the beleaguered Australian.
Heta started brightly, firing in a maximum and drawing first blood with a 110 finish, but a spate of missed doubles gifted Cullen the initiative, and the Masters champion rattled in 160 and 120 checkouts in consecutive legs in breezing through to round two.

"I felt good and I was bang up for this game" said Cullen, who averaged 95.72 to cap off a professional display. "I read lots of people tipping Damon to win this, and I used that as massive motivation. It's an absolutely brutal draw, but this is the best field we've ever had." 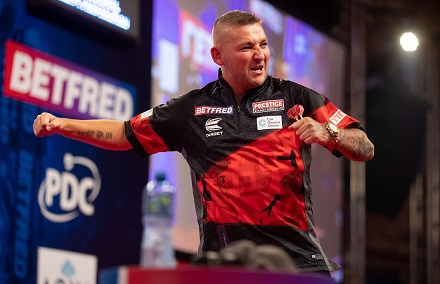 Nathan Aspinall continued his resurgence to claim an impressive 10-5 victory over the highly-fancied Luke Humphries, to set up a last 16 clash against 2007 champion James Wade.
After the pair exchanged breaks in an edgy start to the tie, Aspinall stormed 7-1 ahead courtesy of six unanswered legs, with a fabulous 143 checkout in leg three providing the tonic. Humphries, a four-time winner on the European Tour in 2022, threatened an unlikely fightback after reducing the arrears to 7-4, yet a clinical 100 combination from Aspinall in leg 12 inspired the former UK Open champion to a convincing win.

"Nobody expected me to win that game tonight, and that fired me up," admitted Aspinall, a quarter-finalist in 2021. "I've had a torrid 12 months, but since coming back from injury, my game is there, and I wanted to prove a point. I'm so proud of the way I've come back. I'm absolutely buzzing to be through." 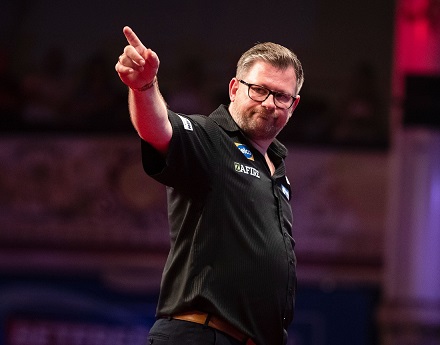 In the evening's other tie, Wade began his bid for a second World Matchplay crown with a hard-fought 10-4 success against debutant Martin Lukeman, in a contest dominated by missed doubles. Wade raced into 3-0 and 7-2 leads as Lukeman toiled on the outer ring, and following a sequence of four straight breaks, a 120 finish in the penultimate leg provided the highlight for the fifth seed.

"I wasn't happy with how I played. I was rubbish," reflected a candid Wade, a six-time finalist at the Winter Gardens. "Martin is absolutely phenomenal. He is an amazing dart player, and I believe he could be one of the next stars of the sport." 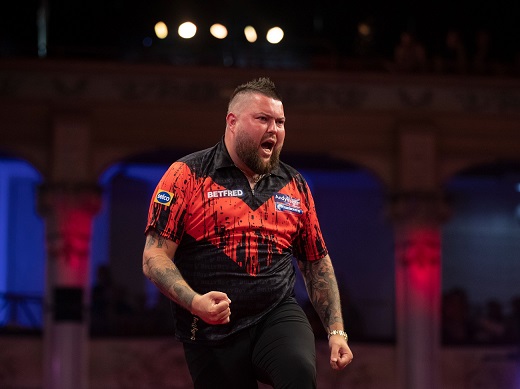 Earlier in the day, Michael Smith produced an inspired fightback to deny Andrew Gilding in the first tie-break of this year's World Matchplay, winning seven of the last eight legs from 8-4 adrift to preserve his title hopes.
Gilding punished a sluggish start from Bully Boy to storm into a 5-2 lead, and though Smith hit back with a sensational 161 finish in leg nine, a classy 130 kill catapulted the former UK Open semi-finalist into a four-leg lead. The World Championship runner-up responded with a sequence of five straight legs to shift the pendulum, and despite spurning three match darts for a 10-8 success, he regained his poise to complete the job with a 14-darter in the tie-break.

"I still believed I could win it," insisted Smith, who averaged 98.43, landed six 180s and converted 11 of his 19 attempts at double to set up a blockbuster tie against Dirk van Duijvenbode. "I never felt comfortable, but luckily enough I never gave up, I kept fighting and I got the win. I'm looking forward to playing Dirk now. It should be a fast, high-scoring game." 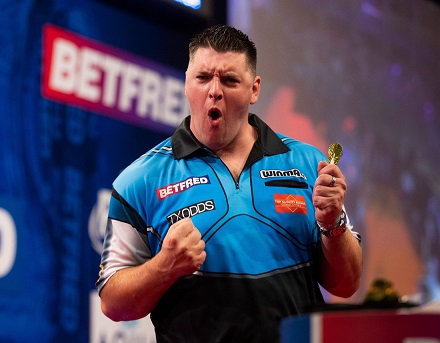 Elsewhere, two-time TV title winner Gurney condemned sixth seed Anderson to his earliest Winter Gardens exit in a decade, recording a 10-7 victory in a compelling contest.
Anderson recovered from 4-2 down to level at five apiece by virtue of superb 130 and 134 combination finishes, but Gurney regained the initiative with a run of three straight legs. The Scot reduced the arrears to 8-7 with a 116 checkout - his third ton-plus outshot - although Gurney kept his cool, firing in a spectacular blind 180 in the closing stages, before closing it out via double eight.

"I have been playing really well. I probably should have won the game more comfortably," said Gurney, a two-time World Matchplay semi-finalist. "Gary Anderson is one of the greatest players of all-time, one of the best 180 hitters in the world, but he didn't perform today, and thankfully I came through and did the job." 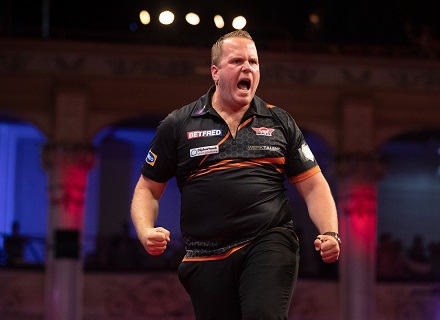 In the afternoon's opener, Van Duijvenbode produced a stirring fightback from 6-3 down to deny Players Championship Finals runner-up Ryan Searle in a high-octane affair.
The Dutchman drew first blood with a delightful 130 finish, but five 180s in as many legs saw Searle establish a two-leg buffer, which he extended courtesy of an 11-darter in leg nine. Van Duijvenbode responded by winning five of the next seven legs to level at 8-8, before following up his second 11-darter of the match with a magnificent 138 checkout to seal his progression in style.

"I just don't give in, ever," said Van Duijvenbode, who averaged 103.61 and fired in six 180s to register his first victory on the Winter Gardens stage. "It is a really tough quarter of the draw. Michael Smith has won the most titles over the last couple of months, so it won't be easy and I need to produce my best game." 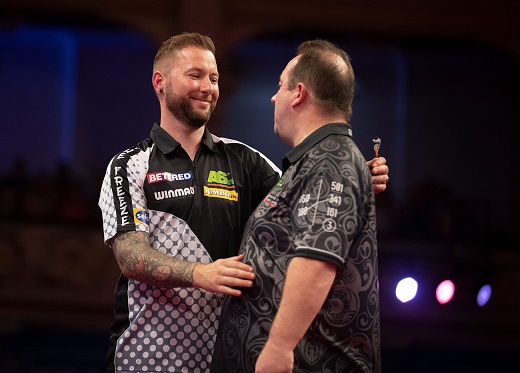 Van Duijvenbode's compatriot Danny Noppert also fought back to book his place in the second round, reeling off six consecutive legs to overcome Brendan Dolan in a high-quality tussle.
Dolan, who was averaging 111 after five legs, moved 4-2 ahead with a stunning 135 finish on the bull in leg six, only to squander three darts at double for a 7-6 advantage in a crucial 13th leg. Noppert, who trailed 6-4 at one stage, continued his charge with a fine 120 finish to move two legs away from victory, and the UK Open champion then wrapped up proceedings in routine fashion.

"I think since the birth of my son, I always think positive now," admitted Noppert, who averaged 100 and twice threatened nine-dart finishes to set up a last 16 showdown against Gurney. "I had some difficult times a few years ago with my parents passing away, but I still think positively every time, and that gives me power."