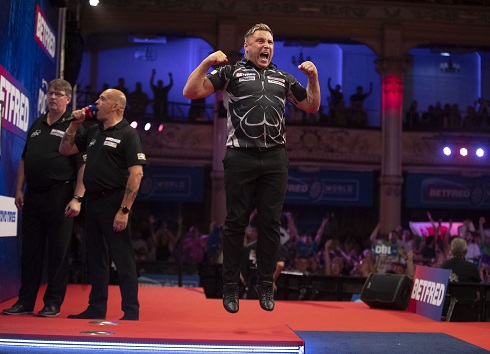 Price came from behind to defeat Chisnall 11-8 and reach the quarter-finals for a third time on a blistering night of action at Blackpool's Winter Gardens.
Price landed checkouts of 164 and 161 on his way to coming through a stern test against World Matchplay veteran Chisnall, who was seeking a sixth quarter-final appearance. Chisnall held the advantage at 6-4, but two legs later the scores were level as Price punished Chisnall's unsuccessful 76 attempt with a 124 checkout on the bullseye. That passage of play proved pivotal, as the following leg saw Price go in front; a lead which the Welshman never relinquished despite checkouts of 142 and 111 from Chisnall who kept the pressure on to the end.

"I knew I was playing well but I let Dave off a few times at the start, just like I did in my first round game," said Price. "I was trying too hard to break Dave's throw and I got a bit frustrated. "The big checkouts were nice, they go in about two or three times in ten; I needed them tonight. "I'm really confident in my game, just sometimes I overthink it when I'm trying to break people down. "I'm getting back to where I should be and I fancy myself against anyone." 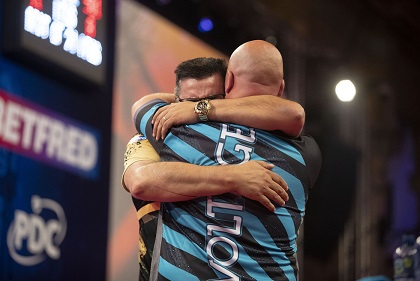 Price will now take on De Sousa, who broke down in tears after defeating Rob Cross 11-8 to reach the last eight for the first time.
The highest quality match of the tournament so far saw both players average over 103, as a rejuvenated De Sousa fired in nine trademark 180s as well as hitting 11 of his 23 double attempts. A 120 checkout saw De Sousa break throw to go 8-4 up, but a missed single 14 in a 108 checkout attempt from the Portuguese, which would have put him 10-4 in front, proved the catalyst for a Cross fightback. 2019 champion Cross, who fought back from 8-2 down to beat Chris Dobey 11-9 in round one, hit a 106 finish after De Sousa's mistake to make it 5-9 before winning three of the next four legs to trail 8-10. With the pressure mounting, De Sousa quelled any fears of a second Cross comeback in as many rounds with back-to-back 180s before sealing victory with a last dart double four.

"It has been a difficult year for me, so this win means the world to me," said an emotional De Sousa. "Nobody can imagine how happy I am to be playing well again. "I just take it game-by-game, but right now I feel great. I'm hitting 180s and 140s again, and when I hit my doubles as well I am a danger for everybody." 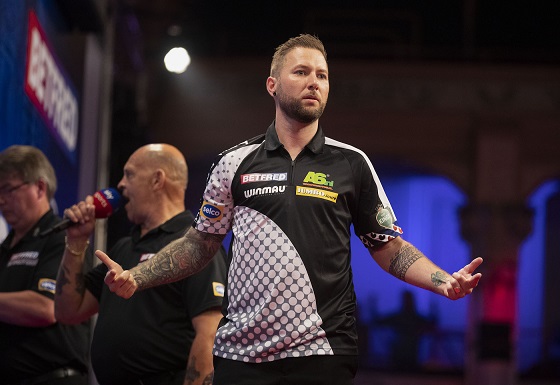 Dutch World Cup of Darts teammates Noppert and Van Duijvenbode will meet in the last eight after coming through ties against Daryl Gurney and Michael Smith respectively.

Noppert laid down a marker to the rest of the field with an impressive display to blow away two-time semi-finalist Gurney 11-4.
Noppert, who won his first TV title at the UK Open in March, landed four ton-plus checkouts and averaged 102.36 in a dominant display. An entertaining tenth leg saw Noppert hit a 'no-look 180' in response to Gurney's attempt at the same feat earlier in the leg, with Noppert eventually winning the leg to lead 7-3. Gurney was unable to turn the tide, winning just one of the next five legs as Noppert made it through to the quarter-finals for the first time. 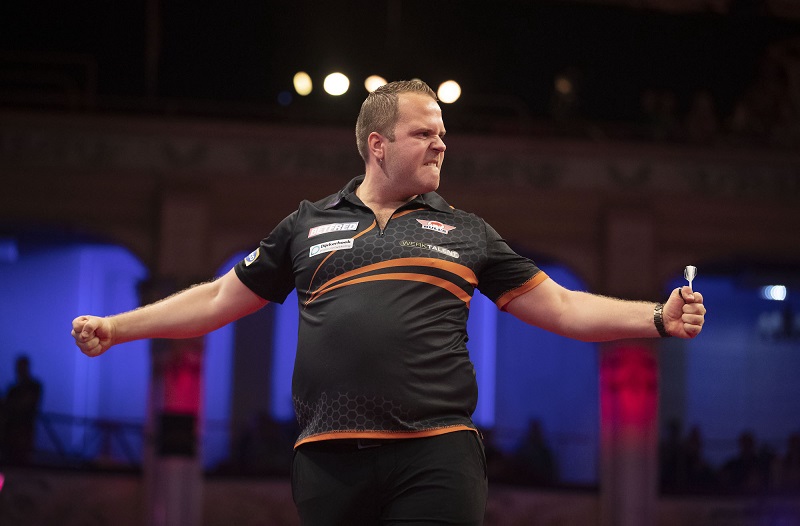 Van Duijvenbode landed the tournament's first 170 checkout to continue his winning run with an 11-7 triumph over one of the title favourites Smith.
An explosive start from Van Duijvenbode saw him go 4-0 up, a deficit Smith was never able to recover. It was a tale of woe on the doubles for Smith, who saw 23 of his outer ring attempts go wide of the target, including a dart at double 12 for a nine-darter. Smith threatened a comeback as he closed the gap from 9-5 to 9-7, but an 86 checkout from Van Duijvenbode saw him strike a crucial break of throw before finishing the job in the following leg.

"I feel lucky tonight that the best version of Michael didn't turn up," Van Duijvenbode admitted. "I felt nervous tonight. I kept waiting for Michael to play his usual game and because I was thinking about that, I started to play badly as well. "The 170 was a nice moment; I didn't need to go for it but I felt so great at that point, I thought I would go for it anyway. "I know I will need to play better against Danny or I will be going home."