Gerwyn Price defied an inspired fightback from Jose De Sousa to book a spot in his first Betfred World Matchplay semi-final in one of the greatest games ever seen at the Winter Gardens.
Price produced the performance of the tournament so far to deny De Sousa in a captivating contest, averaging 104.64 to close out an incredible 16-14 victory and set up a last four clash against Danny Noppert. The UK Open champion dumped out his fellow countryman Dirk van Duijvenbode in Friday night's opener, before Price came through a classic to continue his tilt for World Matchplay glory. 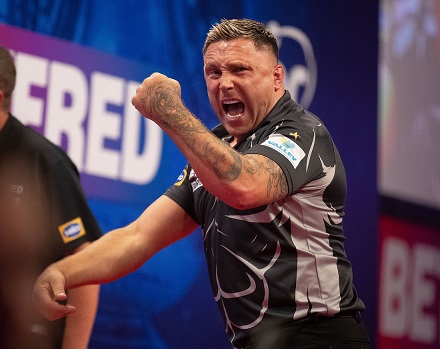 Price and De Sousa traded magnificent 160 checkouts in an explosive start to proceedings, but it was the Welshman who boasted the slender advantage, leading 3-2 with a 105 average.
The 37-year-old was completely outscoring the Portuguese star and that pattern continued in the second session, but a two-dart 93 combination from De Sousa saw him level at five apiece, despite a 12-point disparity in the averages. Price's relentless pressure paid dividends in leg 12 as he finally established some daylight with a classy 88 finish, yet De Sousa delivered an emphatic riposte, taking out a spectacular 90 finish with successive double 18s. The Welshman responded with a third consecutive break to open up a three-leg gap after De Sousa faltered on the outer ring for the first time, and Price refused to relent, extending his cushion to 13-8. Price appeared to be cruising through to the semi-finals, but De Sousa had other ideas, producing a remarkable five-leg burst to level up proceedings, featuring two 12-darters and a magnificent 100 checkout culminating with two double tops. The second seed stopped the rot with consecutive 14-darters to move one leg away from victory, only for the former Grand Slam champion to conjure up a sublime ten-dart skin saver to prolong the tussle. Nevertheless, having only missed seven darts at double throughout the contest, De Sousa squandered five darts at a double to force a tie-break in a dramatic finale, enabling Price to wrap up a famous victory.

The success means that Price will regain the world number one spot ahead of Peter Wright after the event, courtesy of at least 50,000 pound in prize money, although he is remaining focused on the battle to lift the Phil Taylor Trophy.

"That was a difficult game," reflected the 2021 World Champion. "I played pretty well and I think I deserved to go through. "Jose is a great player. He dug in right until the end, and I'm thankful to come through. "I believe I'm the world number one, especially with performances like that. I think it's where I deserve to be." 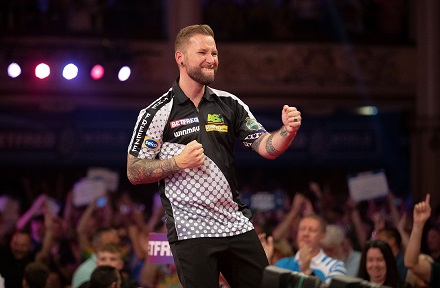 Earlier in the night, Noppert turned on the style in the latter stages to record an impressive 16-11 victory over Dirk van Duijvenbode in the Dutch darting derby.
The UK Open champion was below-par in the first half of the match, but he delivered the goods late on, landing ten 180s and producing two huge ton-plus finishes to seal a spot in his first Blackpool semi-final. Despite converting a superb 132 finish on the bull, Van Duijvenbode endured a torrid start on the outer ring, converting one of his first 13 attempts at double as Noppert established a 4-1 cushion. However, Noppert was struggling in the scoring department and Van Duijvenbode took control midway through the contest, winning five out of six legs to move 8-7 ahead. The former World Grand Prix runner-up was threatening to run away with the contest until Noppert landed a tide-turning 150 checkout to lead 9-8, and that provided the catalyst for his revival. Noppert began to find the treble 20 with greater regularity and opened up a 12-9 lead courtesy of a clinical 87 finish, only for Van Duijvenbode to hit back with a 116 outshot to keep his hopes alive. Van Duijvenbode reduced the arrears to 12-11 with a nerveless 63 checkout on tops, but Noppert restored his two-leg buffer via double ten, before punishing a costly missed big number by his compatriot to move two legs away. The 31-year-old cemented his advantage with a ninth 180 and a 14-dart hold, before producing a delightful 121 finish on the bull to seal his progression in style.

"It was tough. It's never easy to play a friend, but I think the 150 finish saved me," said Noppert, who averaged over 106 in winning nine of the final 12 legs. "In the beginning I was finishing well, but I was struggling to find the trebles. It was a weird game, but I got over the line and that's the most important thing. "I'm a happy man and I'm looking forward to the semi-finals. I have a tough game ahead, and I need to perform at my best."

Saturday night's semi-finals will begin with a blockbuster clash between Price and Noppert, before former champions Michael van Gerwen and Dimitri Van den Bergh collide in the evening's finale. Price has now joined Van Gerwen as the 2/1 joint tournament favourite with title sponsors Betfred, with Van den Bergh 3/1 to claim the title and Noppert the 5/1 outsider.

Elsewhere, midway through Price and De Sousa's clash, last year's maximum count of 301 was surpassed, which means that Betfred will be giving a 10,000 pound bonus as well as 50 pound per 180 for Macmillan Cancer Support.

The action will be broadcast live on Sky Sports in the UK, through the PDC's worldwide broadcast partners including DAZN and Viaplay, and on PDCTV (excluding UK, Germany, Austria & Switzerland based subscribers).