The year's second PDC World Series of Darts event will see a 16-player field competing at Forum Copenhagen on January 20-21, in the third staging of the Nordic Darts Masters. Friday's first round will pit the eight PDC stars against eight Nordic & Baltic representatives in the first of three sessions over the weekend. 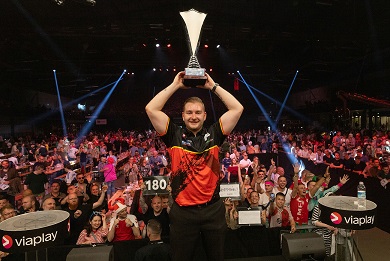 Van den Bergh performed magnificently to triumph in Copenhagen last year, and he will begin his defence of the title against top-ranked Latvian star Razma in a blockbuster first round tussle.
The Belgian claimed two World Series titles in 2022, following up his Nordic Darts Masters success with victory in the inaugural Dutch Darts Masters to continue his progress at the sport's top level. Van den Bergh also made history in becoming the first Belgian player to feature in a World Darts Championship semi-final earlier this month, but he faces a difficult assignment against Razma. "Everybody recognises that Madars Razma is a top-class player," reflected Van den Bergh, who defeated Gary Anderson to prevail in last year's Scandinavian showpiece.

"Madars is amazingly good on the treble 19, he's hit nine-darters on the ProTour, he can finish under pressure, so I know I have to be at my best from the start. "To represent the PDC on the World Series is an incredible honour. I always want to produce my best, so I was bit disappointed with my performance in Bahrain, especially my finishing. "All I can do is take it on the chin and come back stronger, and it would be incredible to retain my title in Copenhagen this weekend."

World Champion Michael Smith is bidding to follow up his Bahrain Darts Masters triumph with a third successive tournament win, as he kicks off his bid against Lithuania's Darius Labanauskas. Top seed Smith is riding the crest of a wave since lifting The Sid Waddell Trophy at Alexandra Palace, having now won 17 of his last 18 competitive matches.

"I don't want to focus too much on a winning streak because you put added pressure on yourself," said Smith, who secured his third World Series of Darts title in Bahrain last week. "I just want to win, I want to keep achieving better things. My World Championship win still hasn't sunk in yet but that's good, because it's giving me more hunger to win more titles. "I know Darius is a dangerous player, so I've got to be on my game. It should be fun, it should be exciting and hopefully I can keep this run going."

Meanwhile, 2021 champion Michael van Gerwen returns to action in his first competitive appearance since succumbing to Smith in an extraordinary World Championship final on January 3. The Dutchman will open his campaign against Sweden's Andreas Harrysson, as he eyes a record-extending 14th World Series of Darts crown in Copenhagen.
Van Gerwen could lock horns with Peter Wright in the quarter-finals, with world number two Wright up against another Swedish star, in the shape of former strongman Dennis Nilsson.

"I sat down and chatted with Dennis at my first World Cup many years ago, and I was just in awe of the guy," admitted Wright, a winner of three World Series of Darts titles. "He is always proud to represent his country. He's a gentleman and an awesome dart player, so I need to perform or I will be going home early. "I'm still searching for my best form, but I think I've got a set of darts that will work this week, so I'm looking forward to it."

"I love doing well in the World Series and promoting the sport all around the world," said Price, who is targeting a first title on Danish soil. "I'm going to take each tournament as it comes. I think I've slipped up by concentrating too much on the big TV events, and you can lose sight on the tournaments that are right in front of you. "It is always nice to win, and winning breeds confidence. My game is there, I'm playing really well, so fingers crossed it happens for me."

Following Friday's first round, the tournament concludes across two sessions on Saturday, with the afternoon's quarter-final action followed by the semi-finals and final in a bumper evening session. The Nordic Darts Masters is being broadcast through Viaplay, via ITV4 in the UK, through the PDC's worldwide broadcast partners including DAZN, and on PDCTV (excluding Germany, Austria & Switzerland based subscribers).