Kim Huybrechts dumped out reigning champion Peter Wright on a dramatic night of third round action at the Cazoo World Darts Championship, while top seed Gerwyn Price dispatched Raymond van Barneveld to seal his place in the last 16 on Tuesday. 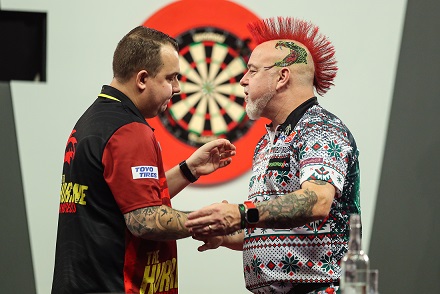 Following a three-day Christmas break, the sport's flagship tournament resumed in some style at the Alexandra Palace, as Wright's bid for a third World Championship crown was curtailed by an impressive Huybrechts.
The Belgian - a former quarter-finalist in the capital - recovered from a sluggish start to triumph in convincing style and set up an all-Belgian last 16 showdown against Dimitri Van den Bergh.
Wright came through a scrappy opening set to strike the first blow, but Huybrechts responded emphatically, following up legs of 13 and 14 darts with a 100 finish to square proceedings. Two-time World Champion Wright changed his darts following set two, but it didn't have the desired effect and Huybrechts continued to dominate, wrapping up set three before edging ahead in the fourth. Wright wired the bull for a 121 finish which would have levelled the contest at 2-2 and Huybrechts capitalised, before surviving another set dart in a nervy fifth set to complete a surprise 4-1 win.

"To beat one of the best players in the world, the reigning champion, it means the world," said an emotional Huybrechts, through to the fourth round for just the second time in a decade. "It wasn't my best performance. Peter didn't even play his B-game, but I took my chances where I could and I've done what I had to do, so I'm very happy with that. "Darts in Belgium is massive now. It's huge. We've got an all-Belgian last 16 game and that is massive. It's never been as big as this moment, so I'm very happy and very thankful."

World number one Price endured no such difficulties, storming through to the last 16 in quick-fire fashion, dispatching five-time World Champion Van Barneveld in straight sets.
Price was without a win in his previous six televised tussles against the Dutchman, but he made a blistering start, converting clinical 84, 68, 87, 117 and 66 combinations to race into a two-set lead. Van Barneveld responded with 125 and 147 finishes in his bid to launch a fightback, but he paid the price for spurning one set dart in the third, as Price sealed the deal with a superb 128 finish on double ten. 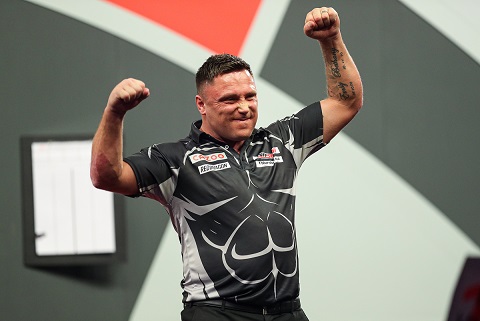 "I needed to start well, put Raymond under pressure and I did that," reflected Price, who suffered two defeats against Van Barneveld at last month's Grand Slam of Darts. "In the Grand Slam I let Raymond off so many times and I didn't want to do that tonight. I wanted to be clinical. "I'm defending a lot of ranking points and I want to lift the trophy, so it's been really difficult, but I'm looking forward to the last 16 and there's not as much pressure on me now."

Elsewhere, Gabriel Clemens survived a match dart to defeat Jim Williams in one of the games of the tournament so far, in a contest played out with over 700 German fans in attendance at Ally Pally.
The opening two sets were shared before Clemens followed up a sensational 157 finish with a 13-darter to lead 2-1, although the German number one then squandered two darts for a 3-1 lead as Williams levelled. The Welshman - who dumped out James Wade in round two - raced into a 3-2 lead, only for Clemens to save his skin in dramatic fashion, taking out 64 and 110 finishes to stay alive. Williams then missed one match dart at double six for a 126 show-stopper, and he was suitably punished late on, as Clemens followed up an 11-dart hold with an 85 finish on the bull to triumph in a seven-set classic.

Earlier in the day, Josh Rock moved through to the last 16 on his Alexandra Palace debut, edging out two-time semi-finalist Nathan Aspinall in a deciding-set thriller to set up a showdown against Jonny Clayton.
The pair fired in 25 maximums between them in a gripping tussle, but Aspinall was punished for missing 37 darts at double as the Northern Irishman held his nerve to progress. Rock drew first blood with a sublime 141 checkout before Aspinall won six of the next eight legs to lead 2-1, only for the Northern Irishman to produce an 11-dart hold to restore parity at two apiece. The 21-year-old then came through a tense fifth-set decider to regain the initiative, and while Aspinall wrapped up set six without reply, Rock followed up a brilliant tops-tops 99 finish with a two-dart 70 kill to complete a landmark win. 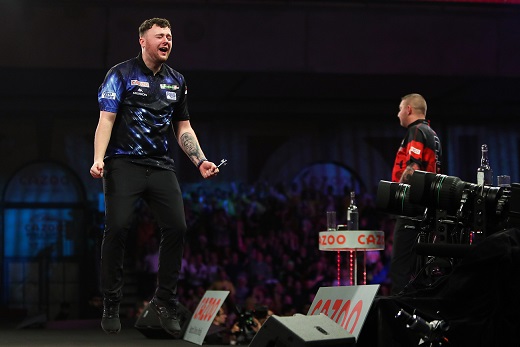 "I was under a lot of pressure there and I dealt with it well," said Rock, who averaged 96 and crashed in 13 maximums to cap off a stellar display. "At the age of 16 I didn't believe I could be here playing on the World Championship stage, so I'm proud of what I am doing now." "I finally played the game I know I can play, but that still wasn't the real Josh Rock."

Rock will now take on five-time TV title winner Clayton for a place in the last eight, after the Welshman came through a gruelling five-set battle against former quarter-finalist Brendan Dolan. After all five sets went to deciding-legs, Clayton's superiority in the crucial moments proved decisive, with Dolan missing 157 and 85 combinations to win sets two and three. The Northern Irishman opened his account in a tightly-contested fourth set, but a clinical 116 checkout from Clayton propelled him to a 4-1 success with a 93 average and six 180s.

Meanwhile, in Tuesday's curtain-raiser, Van den Bergh was the first player to book a place in the last 16, courtesy of an emphatic 4-1 success against Poland's number one Krzysztof Ratajski. Ratajski squandered four darts to win the opening set, and after eventually pinning double four to draw first blood, Van den Bergh raced through set two with a 112 average to extend his lead. Ratajski halved the deficit with a clean sweep in set three - sparked by a superb 135 finish on tops and sealed with an 11-darter - but Van den Bergh recovered to close out a convincing win.