Welsh duo Gerwyn Price and Jonny Clayton booked their places in the quarter-finals of the Cazoo World Darts Championship on another thrilling day of action at Alexandra Palace on Thursday.

Day 12 of the 2.5 million pound event saw the third round draw to a close in the capital in dramatic fashion, before Price and Clayton moved through to the last eight with wins over Jose De Sousa and Josh Rock respectively. 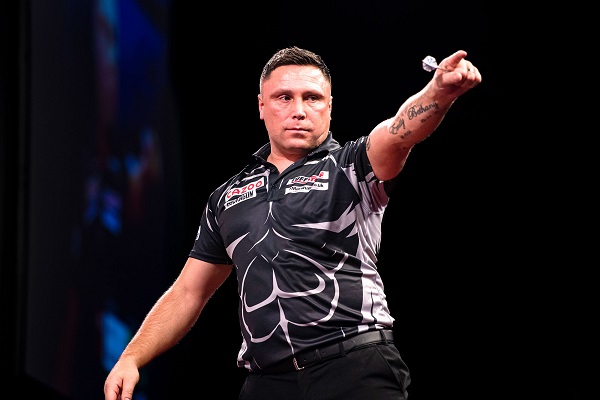 Top seed Price was the first player to advance to the last eight, continuing his bid for a second World Championship crown with a resounding 4-1 win against De Sousa.
The Welshman made a confident start to draw first blood in 14, 15 and 15 darts, before punishing multiple missed opportunities from De Sousa to double his lead. The Portuguese star, who produced remarkable comeback wins over Simon Whitlock and Ryan Searle earlier in the event, threatened to repeat the feat after halving the deficit in set three. The 2021 World Champion avoided a similar fate however, coming out on top in a topsy-turvy fourth set before producing a superb 12-darter to seal his progression in style.

"I just wanted to win - it doesn't matter about the performance," said Price, who will play Gabriel Clemens or Alan Soutar in the last eight on New Year's Day. "I was battling against myself, battling against Jose, but I felt comfortable all the way through the game. I thought I was going to win the game, it was just a matter of time. "I knew how well I could play. I knew I wasn't playing at my best, but when chances did come my way I took them." 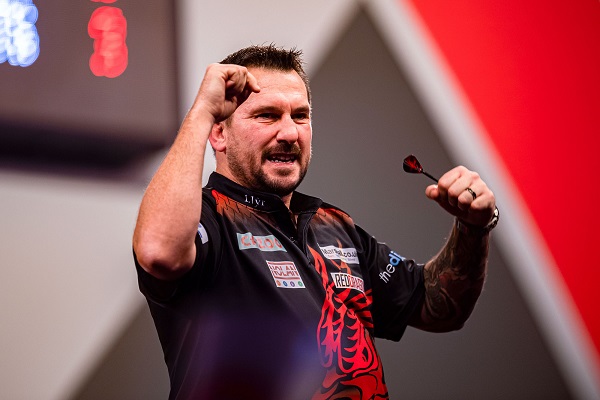 Clayton then joined his World Cup team-mate in the quarter-finals, after recovering from 3-2 down to curtail Rock's dream of lifting the Sid Waddell Trophy on his debut in the event.
The World Youth Champion made a blistering start to seal the opening set with a 110 average, but Clayton punished the Northern Irishman's profligacy to lead 2-1, clinching set three with a remarkable 104 checkout of single 18, double 18 and the bullseye. The roles were reversed midway through the contest as Clayton missed a dart to wins sets four and five, but the Welshman's experience paid dividends in the closing stages. Clayton converted a sublime 122 checkout on double seven which catapulted him to set six, and although Rock had darts to win all three legs in the deciding set, Clayton's clinical combination finishing proved decisive as he moved into the quarter-finals for the first time at Alexandra Palace.

"It's unknown territory for me now, but it's a good place to be," reflected the seventh seed, who will play Dimitri Van den Bergh or Kim Huybrechts for a place in the semi-finals. "Josh went off like a train. I was trying to play at his pace but I had to play my game. It was my night - it was a fantastic game. "I always think I'm a contender. I know if I play my game, I can do it. It just needs to come together, so hopefully it's my year."

Earlier in the day, the last-16 line-up was finalised in the capital, with Rob Cross, Luke Humphries, Dirk van Duijvenbode and Stephen Bunting winning through to maintain their title hopes. 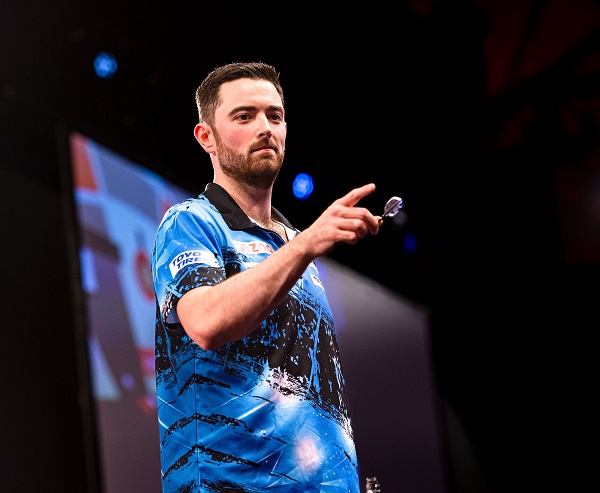 Fifth seed Humphries defied a spirited fightback from Vincent van der Voort to set up a tussle against Bunting, producing a stunning late surge to seal a 4-3 success.
The Berkshire star won six of the first seven legs to establish a commanding cushion, although Van der Voort fought back superbly from 2-0 and 3-2 adrift to force a seventh-set decider. However, Humphries reaffirmed his credentials to seal his place in Friday's last 16, producing a brace of 14-darters and conjuring up a majestic 140 checkout to triumph with an average of almost 113 in the final set.

Elsewhere, 2018 World Champion Cross cruised into the last 16 with a comprehensive 4-1 win over Mervyn King to book a meeting with Gary Anderson's conqueror Chris Dobey.
Cross won the opening eight legs while denying King a solitary dart at double, although last year's quarter-finalist opened his account in style, courtesy of a 136 checkout. King then kicked off set four with a superb 12-darter en route to reducing the arrears to 3-1, but Cross regained control to cap off a dominant display with a 99.13 average. 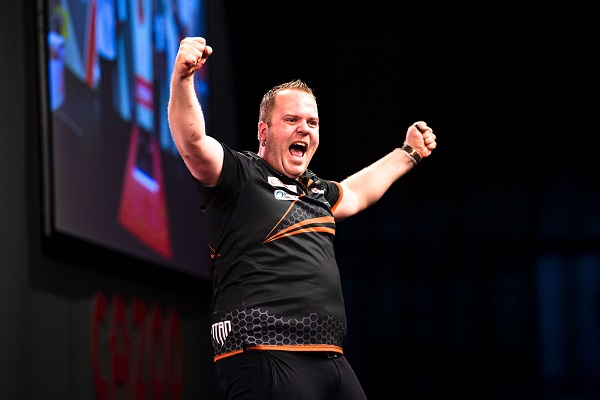 In Thursday's opener, Van Duijvenbode edged out Ross Smith in a sudden-death classic, following a contest which featured a record-breaking 31 maximums and five missed match darts from Smith.
The Dutchman came back from 3-0 down to deny Smith at the same stage of last year's tournament, and he inflicted further heartbreak on the European Champion, who succumbed despite landing a record-equalling 19 180s. Van Duijvenbode forced a deciding set after Smith wired a match dart at the bull for a 4-2 win, and after surviving four more match darts in a gripping seventh set, the 30-year-old sank a nerveless 71 combination on tops to triumph.

"I just thought: 'Give me one dart and I'll take it," said Van Duijvenbode, who hit a dozen 180s and converted finishes of 114, 127 and 136 to set up a fascinating last 16 tie against Michael van Gerwen. "My best game is in there, but I'm not showing in and I definitely need to show it against Michael or I'm out tomorrow. "It will be a fantastic game for the neutral, but I'm not happy with the way I'm playing."

Meanwhile, Bunting produced one of the best performances of his career to defeat his fellow St Helens star Dave Chisnall in an exhilarating six-set affair, which saw both players register ton-plus averages.
Bunting fended off an early barrage from Chisnall with a six-leg blitz of his own, winning set two with a remarkable 122 average, before wrapping up the third with a sensational 140 tops-tops finish. Chisnall responded with a 116 average in set four to restore parity, but after firing in legs of 12, 14 and 14 darts to move a set away from glory, he held his nerve in the latter stages to complete a superb 4-2 win.

"That's the best I've ever played on that stage," insisted Bunting, who was an Ally Pally semi-finalist back in 2021. "Dave was throwing everything at me, but there were stages in that game where I felt I could just place them in that treble 20. "I hit a nine-darter in practice. I was playing unbelievably and I felt so comfortable. It's going to take my best to win this tournament, but I think there's more levels in the locker."