Michael van Gerwen continued his bid for a fourth Cazoo World Darts Championship crown with an emphatic 4-1 win over his fellow Dutchman Dirk van Duijvenbode on Friday, as the quarter-final line-up was finalised at Alexandra Palace.

The final day of darting action in 2022 saw the remaining six ties in the fourth round take place in the capital, with three-time World Champion Van Gerwen and two-time runner-up Michael Smith easing through to the last eight. 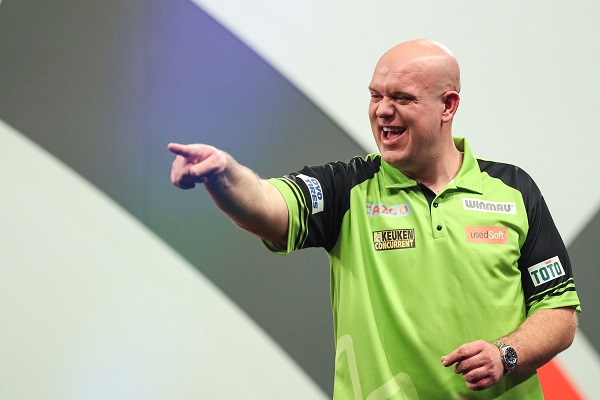 Van Gerwen registered a record-extending 36th ton-plus average in the sport's showpiece event to dispatch his compatriot Van Duijvenbode and move through to a ninth World Championship quarter-final.
The number three seed drew first blood in a high-quality opening set, which featured a 117 finish from Van Duijvenbode and a superb 11-dart opener from Van Gerwen. The 33-year-old then defied a sublime 170 finish from Van Duijvenbode to double his lead, although the three-time TV finalist rallied to halve the deficit, following up a crucial 76 kill with a brace of 180s to win set three. Nevertheless, Van Gerwen punished a sluggish spell from his compatriot to restore his two-set cushion, before producing a classy 120 checkout in set five to seal his progression in style.

"It wasn't a perfect performance, but I did some really important shots when I had to," reflected Van Gerwen, who recorded his seventh consecutive ton-plus average on the televised stage. "I'm full of confidence and in the next round the format is going up. Everything is going to be in my favour, but you need to stay sharp and stay focused. "I'm only in the quarter-finals and last time I was in the quarter-finals I was smashed 5-0 by Dave Chisnall, so I don't want to put myself in the same position again." 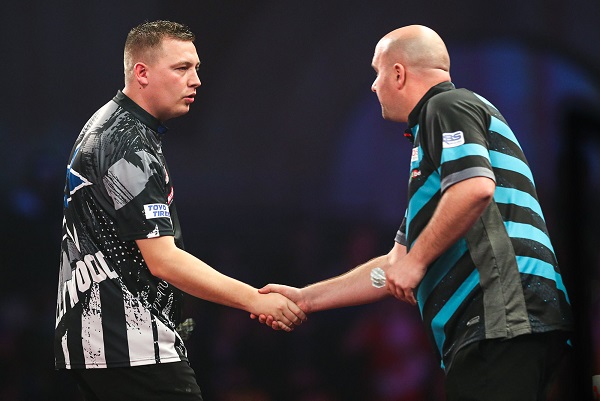 Van Gerwen will now take on Chris Dobey in the last eight, after the Bedlington star produced a stunning display to dump out 2018 winner Rob Cross and reach the quarter-finals for the first time.
Cross struck the first blow before Dobey responded in an extraordinary second set, winning three straight legs to level despite the sixth seed averaging almost 119. Cross restored his cushion in set three, but a spectacular 170 finish from Dobey midway through the fourth shifted the pendulum, and the three-time TV semi-finalist showed his class to close out a landmark win.

"It's the best win of my career," said Dobey, who averaged 102 to make it back-to-back wins over World Champions, following his defeat of two-time Ally Pally conqueror Gary Anderson in round three. "This is the biggest competition in the world and it's my best performance on the World Championship stage, so to get over that last 16 hurdle is another tick on my list. "Michael is on top form and he's going to take some beating, but I beat him last time out at the European Championship, so I'll be ready." 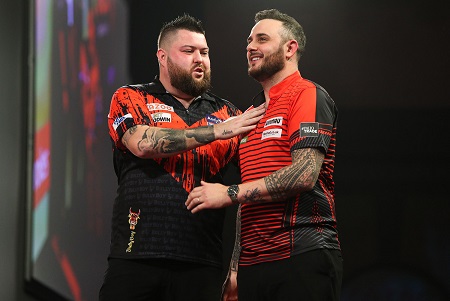 Earlier in the day, fourth seed Smith produced an imperious display to storm through to the last eight at Ally Pally, averaging over 103 to complete a 4-1 win against Masters champion Joe Cullen.
Smith produced a blistering mid-game burst to seize the initiative, reeling off four straight legs in just 49 darts to move 2-1 ahead, only for Cullen to stop the rot with a spectacular 153 checkout. However, Smith came through an edgy fourth set to extend his cushion, before rounding off victory with a sublime 12-darter in a fifth-set decider, having kicked off the leg with seven perfect darts.

"I finally turned up and it felt good," declared the Grand Slam champion, who averaged 103, landed ten 180s and converted 40% of his attempts at double. "I think the first set was important. Being 1-0 down against Joe could have been a big game-changer, and I knew I couldn't afford to throw sets away. "I want to play the best players, I want to beat the best players and I want to show how far my game has come, and winning this title would mean everything."

Smith's reward is an all-St Helens clash against Stephen Bunting for a place in the semi-finals, after the 2021 semi-finalist continued his magnificent recent form to dispatch fifth seed Luke Humphries 4-1.
Bunting averaged 102 to overcome Dave Chisnall in round three, and he delivered a similarly impressive display to account for the former UK Open runner-up. The former Lakeside Champion converted 121, 127 and 106 combinations to cap off a clinical display, defying a brief rally from Humphries in set three to preserve his hopes of lifting the Sid Waddell Trophy. 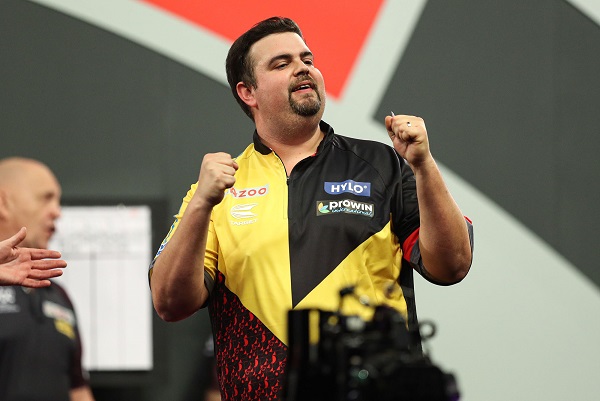 Elsewhere, Gabriel Clemens made history with a resounding 4-1 success against Scottish star Alan Soutar to become the first German player to reach the quarter-finals at the World Darts Championship.
The opening two sets were shared, but Clemens assumed control midway through the tie, converting 85, 92 and 62 combinations in set three, before producing legs of 11 and 15 darts to move 3-1 ahead. Germany's number one then conjured up a majestic 148 finish on tops to edge closer to victory, and overcame some late nerves to book a fascinating quarter-final showdown against top seed Gerwyn Price.

"I'm in the quarter-finals of the World Championship, it's amazing," admitted Clemens, who will feature in his first televised ranking quarter-final on New Year's Day. "I hope this inspires younger players in Germany. There are so many German fans in the crowd, and that's really nice. "Gerwyn is the favourite, but I've played three good games on this stage, and we will see. I believe I will give him a good game and I will take my chances."

Meanwhile, in Friday's opener, Dimitri Van den Bergh secured a place in his third World Championship quarter-final after producing a demolition job to defeat his Belgian World Cup partner Kim Huybrechts in straight sets. Van den Bergh kicked off proceedings with a sublime 11-dart leg which set the tone for a dominant display, and he won nine of the last ten legs to set up a New Year's Day showdown against Jonny Clayton.

The quarter-final action will take place on a blockbuster double session on January 1, with Clayton and Van den Bergh kicking off proceedings, before the all-St Helens tie between Smith and Bunting. The evening session will then see 2021 World Champion Price play German trailblazer Clemens, before Van Gerwen and Dobey collide for a place in Monday's last four.