CLEMENS DISPATCHES PRICE TO STORM THROUGH TO WORLD CHAMPIONSHIP SEMIS

Gabriel Clemens continued his history-making run at the Cazoo World Darts Championship with a sensational 5-1 demolition of world number one Gerwyn Price to reach the semi-finals at Alexandra Palace on Sunday.
Clemens had already made history by becoming the first German player to reach the quarter-finals of the sport's biggest event, and he created further headlines on New Year's Day with a rout of the 2021 champion. 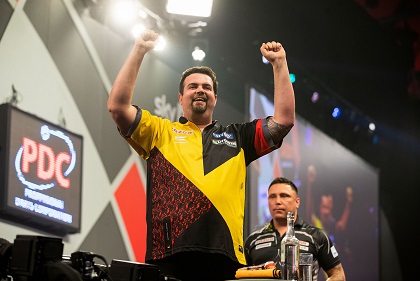 Two-time runner-up Michael Smith will face Clemens in Monday's semi-finals after seeing off Stephen Bunting, while Michael van Gerwen will take on Dimitri Van den Bergh after their wins over Chris Dobey and Jonny Clayton respectively.
It was an unforgettable clash between Clemens and top seed Price which created a global talking-point after the Welshman sported noise-cancelling ear defenders during the fifth set.
Price had made a blistering start to the contest, taking out 140 and 110 checkouts in consecutive legs to draw first blood with a 107 average in winning the opening set without Clemens having a dart at a double. However, the German number one responded magnificently, posting ton-plus averages to win each of the next two sets, and then converting a stunning 136 finish en route to a 3-1 lead. Clemens then fired in a superb 11-darter to wrap up set five, before completing a clean sweep in set six to break new ground at Alexandra Palace. Cheered on by a significant German contingent at Alexandra Palace, Clemens rose to the occasion, averaging 99.94 and landing eight 180s to take full advantage of a below-par display from Price.

"I think this will be amazing for darts in Germany," said Clemens, who continues to pull in record viewing figures on German TV station Sport1, in addition to the coverage through DAZN in his home country. "This was the biggest match of my life and it's my best performance on the stage. I'm so happy." He added: "Michael Smith is the Grand Slam champion, one of the favourites for the tournament and one of the best players in the world, but I will have my chances. "I think it will be a good game. I am only focusing on the semi-finals, and I think I can beat every player." 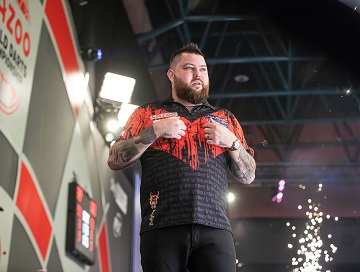 Meanwhile, Grand Slam of Darts champion Smith moved to within a win of his third World Championship final in five years with a hard-fought 5-3 defeat of Bunting.
Smith, who came through a seventh-set decider against Martin Schindler in the last 16, looked to be cruising into the final four as he raced into a 4-1 lead against his profligate St Helens rival. However, 2021 semi-finalist Bunting came roaring back, winning six of the next seven legs to reduce the arrears to 4-3 and threaten an extraordinary fightback. Nevertheless, the eighth set saw Bunting spurn a string of darts at doubles and Smith capitalised, holding his nerve on double ten to advance to the last four for the second straight year.

"I wasn't at my best up there today," admitted Smith, who will become the new world number one if he scoops the 500,000 pound top prize on January 3. "I managed to dig deep when I needed it and when I was under pressure I managed to hit doubles. "For most of the tournament I've been winning ugly, but I'm into the semi-finals. "I put myself under too much pressure. Today felt weird on stage, but I when I needed to produce something I found it." 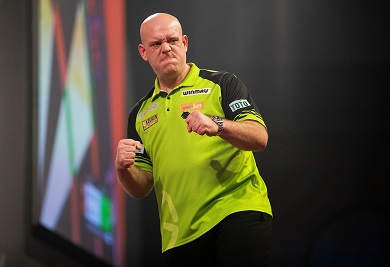 Elsewhere, three-time World Champion Van Gerwen stormed through to the semi-finals with a straight-sets demolition of Dobey in a quick-fire tussle. The Dutchman raced to victory in just over 33 minutes of play, averaging 102, landing five 180s and relinquishing just three legs en route to a crushing 5-0 win.

"I feel good. Chris didn't play his game but I put him under pressure from the beginning," said Van Gerwen, who posted his fourth consecutive ton-plus average at this year's World Championship. "If Michael van Gerwen turns up, he is going to win the game, but you need to make sure your preparation is right, your focus is good. "You need to believe in your own opportunities and your own ability, and that's what I do. "I have learnt from my defeats in the last few years and I've come back stronger. I feel comfortable, my belief is back and I'm looking forward to the semi-finals." 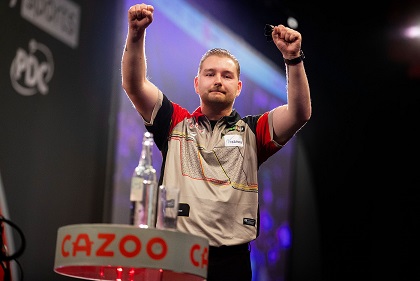 In Sunday's opener, Van den Bergh moved through to the semi-finals for the first time in his career, running out a 5-3 winner in a test of endurance against Clayton.
The Belgian number one - starring in his third quarter-final - fought back from 3-2 down, winning three consecutive sets to break new ground in the capital. Clayton's clinical combination finishing proved decisive in the opening exchanges, but Van den Bergh's superior scoring power catapulted him to victory, as he landed 13 maximums to triumph.

"I'm one step closer to make my dream come true of becoming a PDC World Champion," said Van den Bergh, who becomes the first Belgian to reach the semi-finals of the sport's flagship event. "It was a battle up there today, I had a few moments when I felt comfortable but I missed my chances in the early stages. "Jonny had chances too but thankfully he didn't take them and I'm delighted to be through. "It is special to finally pull through to the semi-finals but I still haven't shown my best yet; I think I have the game to go all the way."

The semi-finals will take place on a blockbuster Monday night, with German trailblazer Clemens up against fourth seed Smith for a place in Tuesday's showpiece. Van Gerwen will then continue his bid for a fourth World Championship crown against Van den Bergh, who is aiming to become the first Belgian player to lift the coveted Sid Waddell Trophy.