Michael van Gerwen and Michael Smith will meet in the final of the 2022/23 Cazoo World Darts Championship on Tuesday evening, after producing superb semi-final displays at Alexandra Palace.

Van Gerwen produced an inspired display to whitewash Dimitri Van den Bergh 6-0 in Monday's second semi-final, averaging 108.28 to move through to a showdown against Smith, in a repeat of the 2019 showpiece.
Meanwhile, two-time runner-up Smith crashed in 19 maximums and landed five ton-plus finishes to curtail Gabriel Clemens' fairy-tale run in the capital, reeling off four straight sets to close out a 6-2 success. 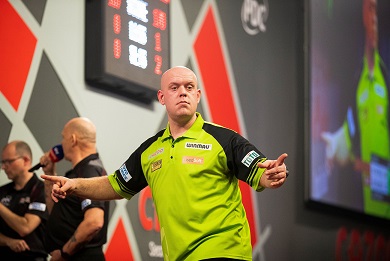 However, Van Gerwen stole the headlines with a blistering display, following up his 5-0 demolition of Chris Dobey in the quarter-finals with another whitewash win to move through to his sixth World Championship final.
The three-time World Champion has now won 13 sets without reply in the capital, and he posted his fifth ton-plus average of the tournament to continue his bid for a first Ally Pally title since 2019. Van den Bergh struck the first blow with a sublime 170 finish during the opening set, only for Van Gerwen to reply with legs of 14 and 11 darts to open his account. The Dutchman extended his winning run to eight straight legs to storm into a 3-0 cushion, taking out a sensational 170 finish of his own in a spectacular third set, which saw him average 128.83. Van den Bergh threatened to reduce the deficit after forcing a fourth-set decider with a superb 121 on the bull, but after spurning two set darts, the Belgian wasn't afforded another opportunity. Van Gerwen produced another three-leg blitz in set five, registering winning legs of 13, 11 and 11 darts to record another set average of 128.83, before firing in a trio of 13-darters to cap off a majestic performance.

"To win games like that gives you confidence and joy, but I haven't won anything yet," insisted Van Gerwen, who defeated Smith 7-3 to lift his third World Championship crown four years ago. "It feels phenomenal to play the game I played tonight. I'm playing out of my skin at the moment and it means a lot to me. "The crowd gave me so much energy, but I also try to give them something back and tonight it worked, because I produced a stunning performance. "I feel good, I feel comfortable and I'm doing the right things at the right moments. Roll on tomorrow now!" 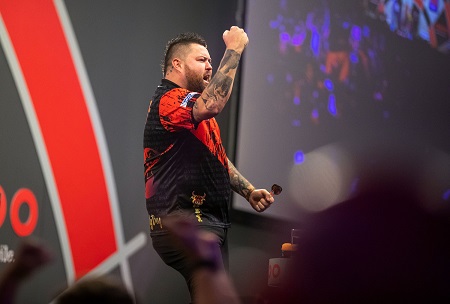 Meanwhile, in Monday's opening last four tie, Smith produced a sensational display to move through to his third World Championship final in just five years.
Smith, who was beaten by Peter Wright in last year's final, turned on the style to deny trailblazer Clemens - who made history in becoming the first German player to feature in the World Championship semi-finals. The St Helens star drew first blood in an astonishing opening set which featured six 180s, taking out a clinical 106 kill on tops to wrap it up with a 110 average. The two-time runner-up then kicked off set two with back-to-back 11-darters, but Clemens rallied, surviving four set darts to restore parity at one apiece. The next two sets also went the distance, and despite Smith's unrelenting assault on the treble 20, Clemens appeared unfazed, defying a spectacular 161 finish from the fourth seed to draw level at 2-2. However, Smith swept through set five with successive legs of 15, 12 and 13 darts to regain the initiative, and a clinical 83 finish on the bull in a sixth-set decider saw him establish a two-set buffer. Smith then defied a spirited fightback from Clemens to clinch set seven with a 106 average, before punishing crucial missed doubles from the German in the latter stages to seal his place in Tuesday's showpiece.

"I'm in my third final in five years. I'm over the moon," reflected Smith, who averaged 101.85 to continue his bid for the coveted Sid Waddell Trophy. "It wasn't quite the complete performance, but I wasn't far off. Everything felt good tonight, there were a couple of dodgy scores, but you can't be perfect every leg. "This means everything. From the heartache of last year - I've battled through over the last 11 months, just to get back to this stage and get another chance - it's been special. "I will never give up. I finally won my first TV title at the Grand Slam, and hopefully I can get my first World Championship tomorrow. I want to get revenge against Michael from 2019."

The final of the Cazoo World Darts Championship will be contested between Smith and Van Gerwen at 2000 GMT on Monday January 3, with the winner also guaranteed to become the new world number one.