Michael Smith produced the performance of his career to defeat Michael van Gerwen 7-4 and claim his first Cazoo World Darts Championship title in an incredible final at Alexandra Palace on Tuesday. 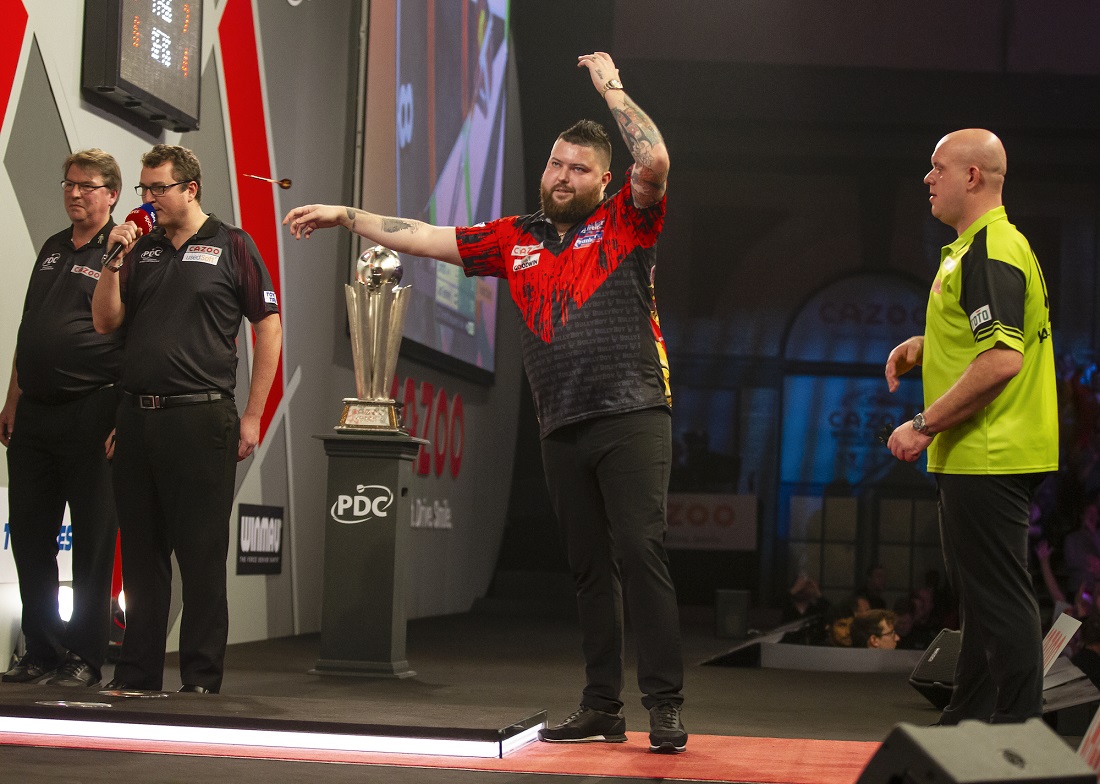 On his way to winning an all-time classic, Smith hit a nine-dart finish in the third leg of the second set which also saw Van Gerwen miss double 12 for a nine-darter.
From 3-2 down, Smith produced a run of four straight sets to take control at 6-3, before going on to seal a famous win which sees him become world number one for the first time.

"The way I felt when I won will never be topped, no matter what I do in this sport in the future," said an emotional Smith. "To be World Champion and world number one is amazing. "Michael let me off a lot and, for once, I finally took my chance. "In practice today I kept going 180-180-miss and I wanted to give the crowd what they deserved, a nine-darter. "When I won the Grand Slam I said I would eventually become World Champion and world number one. "I want to do what Michael has done, I want to dominate the sport but he's still around! "It's now 1-1 between us in World Championship finals, but I don't think it will be the last." 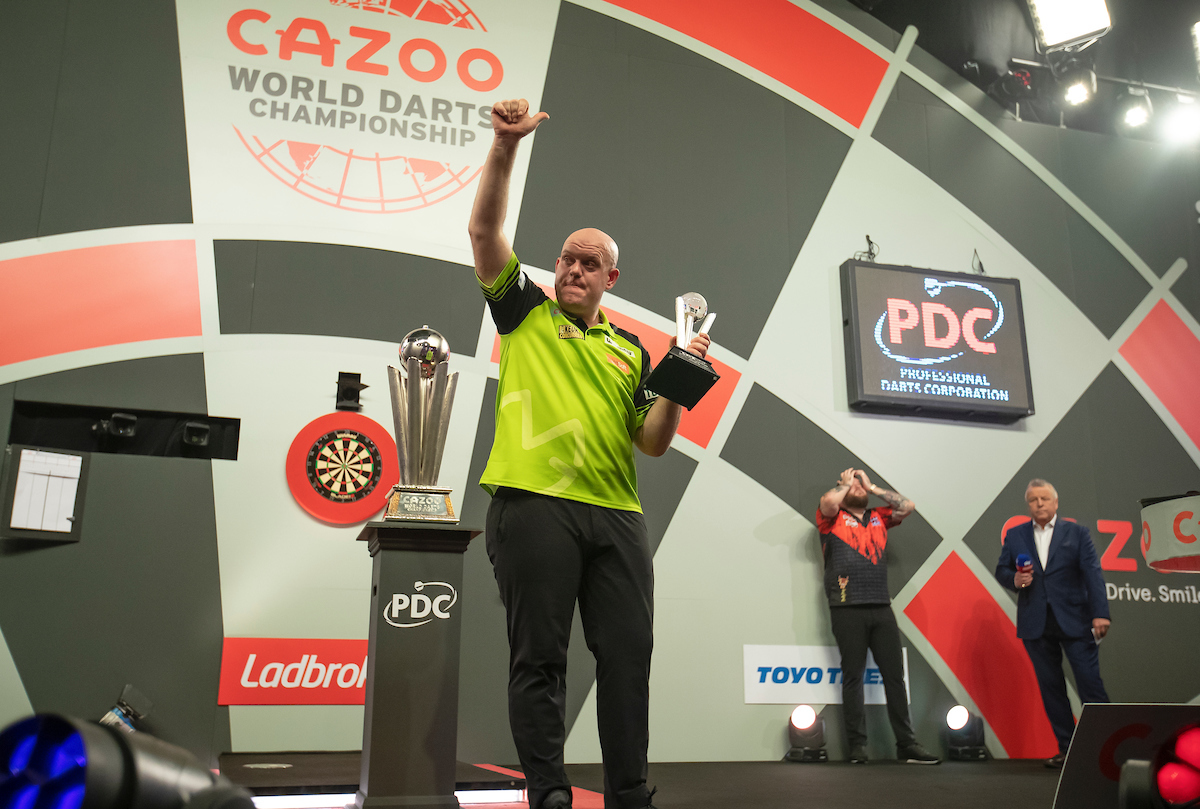 Competing in his sixth World Championship final, Van Gerwen suffered a third defeat in the sport's showpiece event. The Dutchman, who posted his first sub-100 average of the tournament, remains third on the Order of Merit.

"Michael played a phenomenal game, he deserves this win," Van Gerwen reflected. "Of course, I had my chances - I missed too many doubles and when you don't hit them you get punished. "I didn't play too well in the last few sets but I can only blame myself for that, you have to take it on the chin. "When you lose games it's hard but it's part of the job. I will be back."

The opening set saw Van Gerwen land an 84 checkout to break throw and win his 14th consecutive set of the tournament. The second set featured the best ever leg of darts in recorded competition as Smith hit a nine-dart finish in the same leg which saw Van Gerwen miss an attempt at double for a nine-darter of his own. This sealed a break of throw for Smith, who then tidied up 25 in two darts to wrap up the set and level the match at 1-1. After missing the bullseye for a 170 checkout, Smith wrapped up the third set, before Van Gerwen took the fourth without conceding a leg to level the tie at 2-2. In a fifth set decider, Van Gerwen broke throw in 14 darts to take the lead for what proved to be the final time in the match at 3-2.
However, the key passage of the match saw Smith win 12 of the next 16 legs to take a 6-3 lead in sets. Van Gerwen stopped the rot with a 105 checkout before the set ten decider saw Smith take the first shot at a match-winning checkout, but he was unable to land a 167 before Van Gerwen found a last-dart double 16 to stay alive. Van Gerwen then took a 2-0 lead in the 11th set, but Smith hit back with a 106 checkout, followed up with a 15-dart break to move within a leg of the title. Smith kicked off the deciding leg with back-to-back 180s before sealing victory with an 11-darter on double eight to seal a stunning 7-4 success. 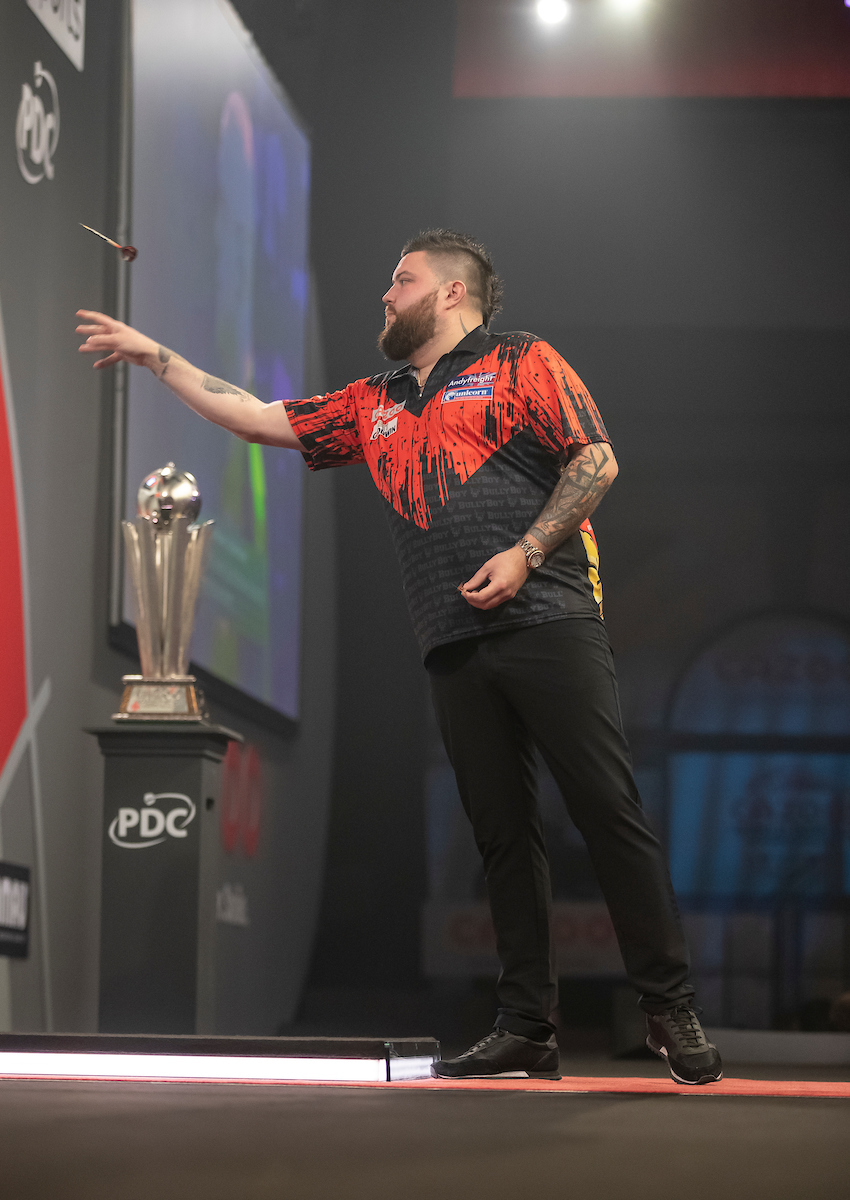 Smith threw first, taking the opening leg in 13 darts but missed shots at 116 and 90 as Van Gerwen found a double at his eighth attempt to get his first leg on the board. Van Gerwen then fired in his second 180 on his way to an 11-dart hold, before landing an 84 checkout to break throw and win his 14th consecutive set of the tournament.

The second set saw the best ever leg of darts in recorded competition as Smith hit a nine-dart finish in the same leg which saw Van Gerwen miss an attempt at double for a nine-darter of his own. In the context of the set, Smith broke throw to take a 2-1 lead before tidying up 25 to wrap up the set and level the match.

Smith landed an 80 checkout to break throw in 14 darts and take a 2-0 lead. Van Gerwen broke back immediately with a 13-darter, only for Smith to reply in kind with a 14-dart leg after missing the bullseye for a 170 checkout.

Van Gerwen issued the perfect response to going behind in the tie, backing up a hold of throw with two double 18s for a 90 checkout to break. Van Gerwen wrapped up the set with an 83 checkout to level the tie.

The first four legs of the set all went with throw, with Van Gerwen landing a 100 checkout in leg two and a ten-darter in leg four. A decisive deciding leg went the way of the Dutchman, who broke throw in 14 darts with Smith failing to produce a visit over 100.

The opening three legs all went against throw, before Smith held in 18 darts, crucially pinning a last dart double ten to restore parity once again.

Van Gerwen took the opening two legs in 15 and 14 darts respectively, before Smith held in 16. Smith landed a 130 checkout to force a deciding leg which he won with a 14-dart hold to hit the front in the tie.

Smith broke throw in 13-darts, following it up with a 15-dart break. Van Gerwen stayed alive in the set with a 14-dart hold, but Smith replied in kind to open up a two-set cushion for the first time.

Smith took out 74 to hold throw, before breaking in 15 darts. He pressed home his advantage, landing a 180 en route to a 14-dart hold to win his fourth successive set.

Van Gerwen took out 105 to stop the rot, the first of four legs to go with throw. In the deciding leg, Smith had the first shot at a match-winning checkout, but was unable to land a 167 before Van Gerwen found a last-dart double 16 to stay alive. 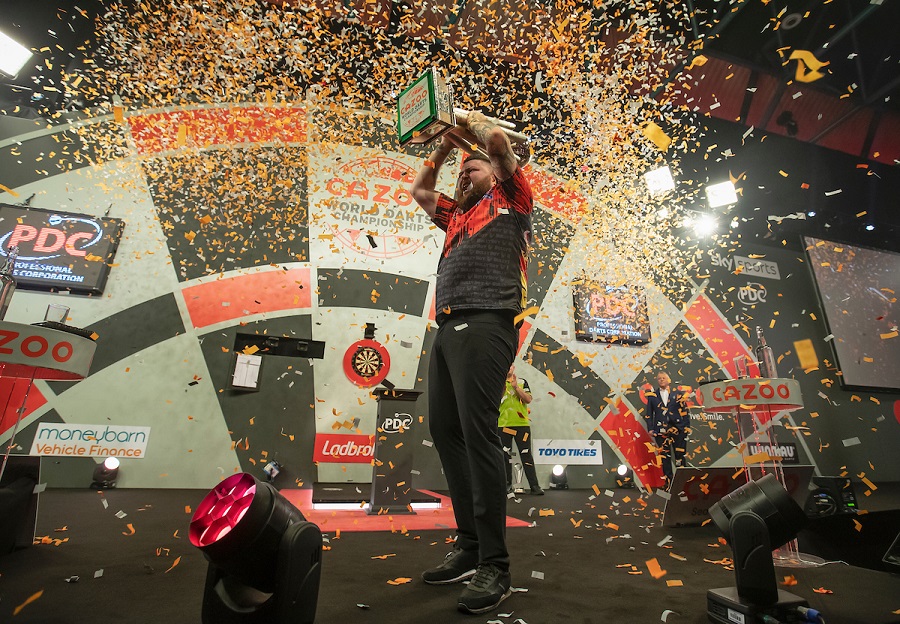