Michael Smith began his bid for the coveted Sid Waddell Trophy with a whitewash win over Northern Ireland's Nathan Rafferty at the 2022/23 Cazoo World Darts Championship on Friday night.

Fourth seed Smith put down a marker on Day Two at Alexandra Palace, winning nine straight legs to secure his place in round three with a 96 average, three 180s and finishes of 114 and 130.
Friday's action also saw two-time World Champion Adrian Lewis impress in his opener, while William O'Connor produced a classy display to defeat teenage trailblazer Beau Greaves. 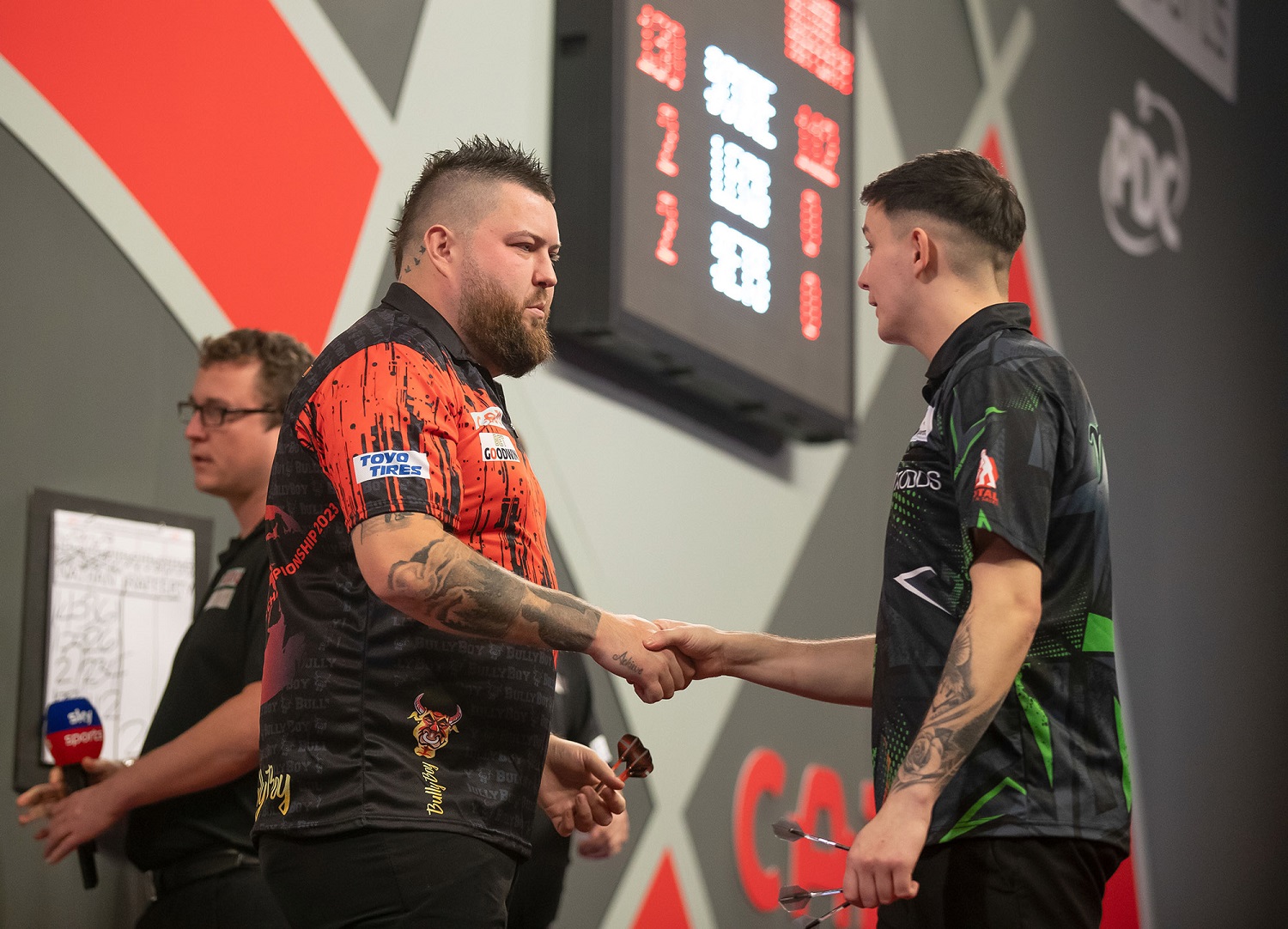 However, Smith - who lifted his first televised ranking title at last month's Grand Slam of Darts - continued his fine form to confirm his post-Christmas return.
The St Helens star took out 114 in claiming the opening set without reply, and the second set followed a similar pattern, as Rafferty toiled on the outer ring. Smith upped the ante in the closing stages, firing in six perfect darts to threaten the first nine-darter of this year's showpiece, before producing a majestic 130 finish on the bull to triumph in style.

"Nathan struggled up there and I had to take advantage of that," reflected the two-time World Championship runner-up. "I'm playing well and I think everyone knows if I continue to play well, it's going to take someone special to beat me." 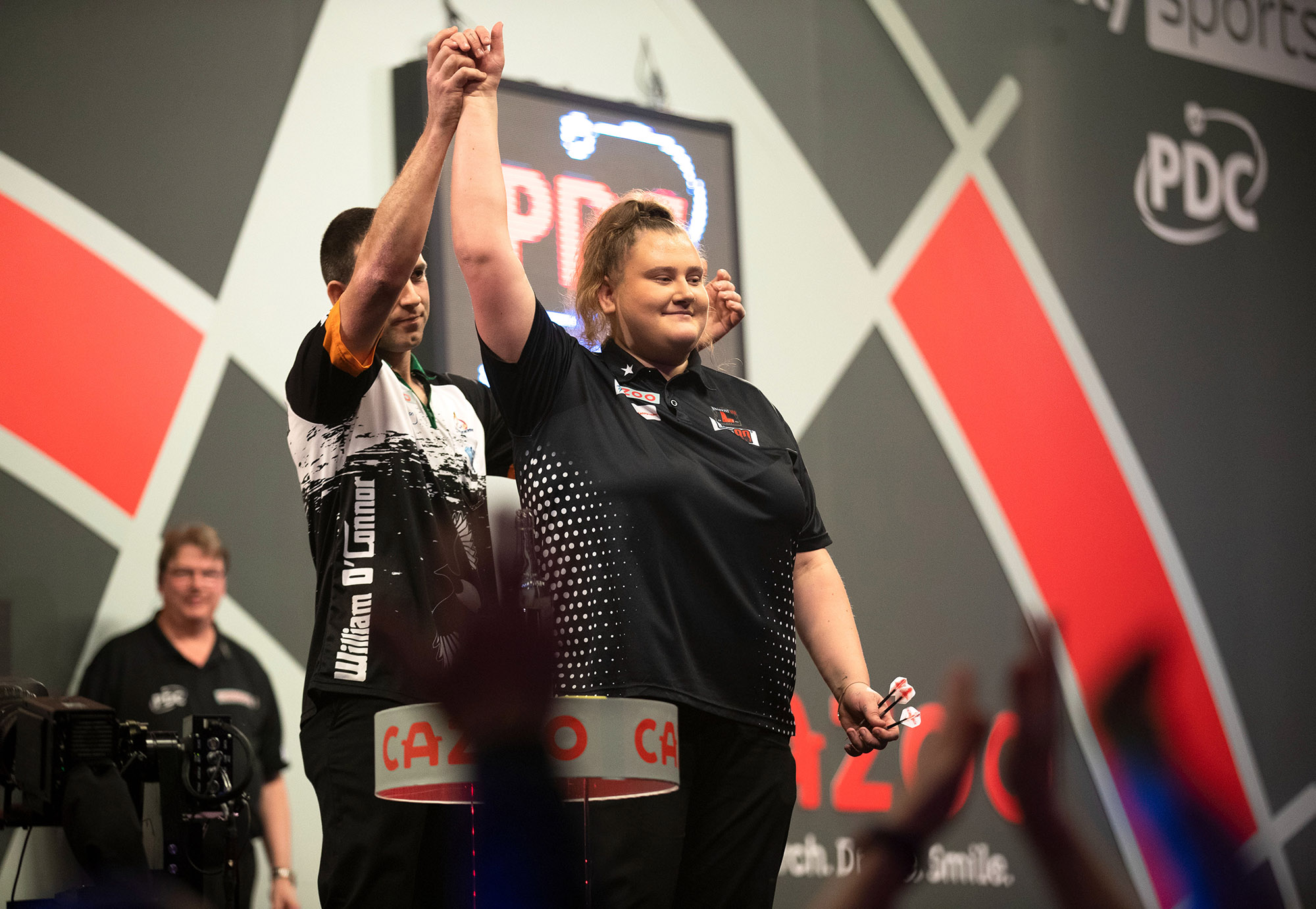 O'Connor also delivered an eye-catching performance on Friday night to record a straight-sets victory over Greaves, who made history on her Alexandra Palace debut. Greaves - the youngest woman to compete at the World Darts Championship - impressed despite the scoreline, producing a brace of brilliant ton-plus finishes in defeat. The 18-year-old scooped eight consecutive Women's Series titles and won 52 successive matches to seal her place in the sport's biggest event, but it was a contest decided by fine margins.
Greaves showed no sign of debut nerves, raising the roof with a 120 checkout in the opening leg, although it was O'Connor who drew first blood in a high-quality first set. The Doncaster darter missed double 16 for a 105 set-clincher, but she responded by producing a magnificent 122 finish on double seven to kick off set two. Greaves almost levelled proceedings with her third ton-plus finish - wiring the bull for a spectacular 161 kill - and O'Connor duly capitalised by reeling off three straight legs to double his cushion. The Irishman appeared unfazed by the partisan atmosphere, and he landed a clinical 107 finish en route to wrapping up set three without reply, capping off a high-quality display. 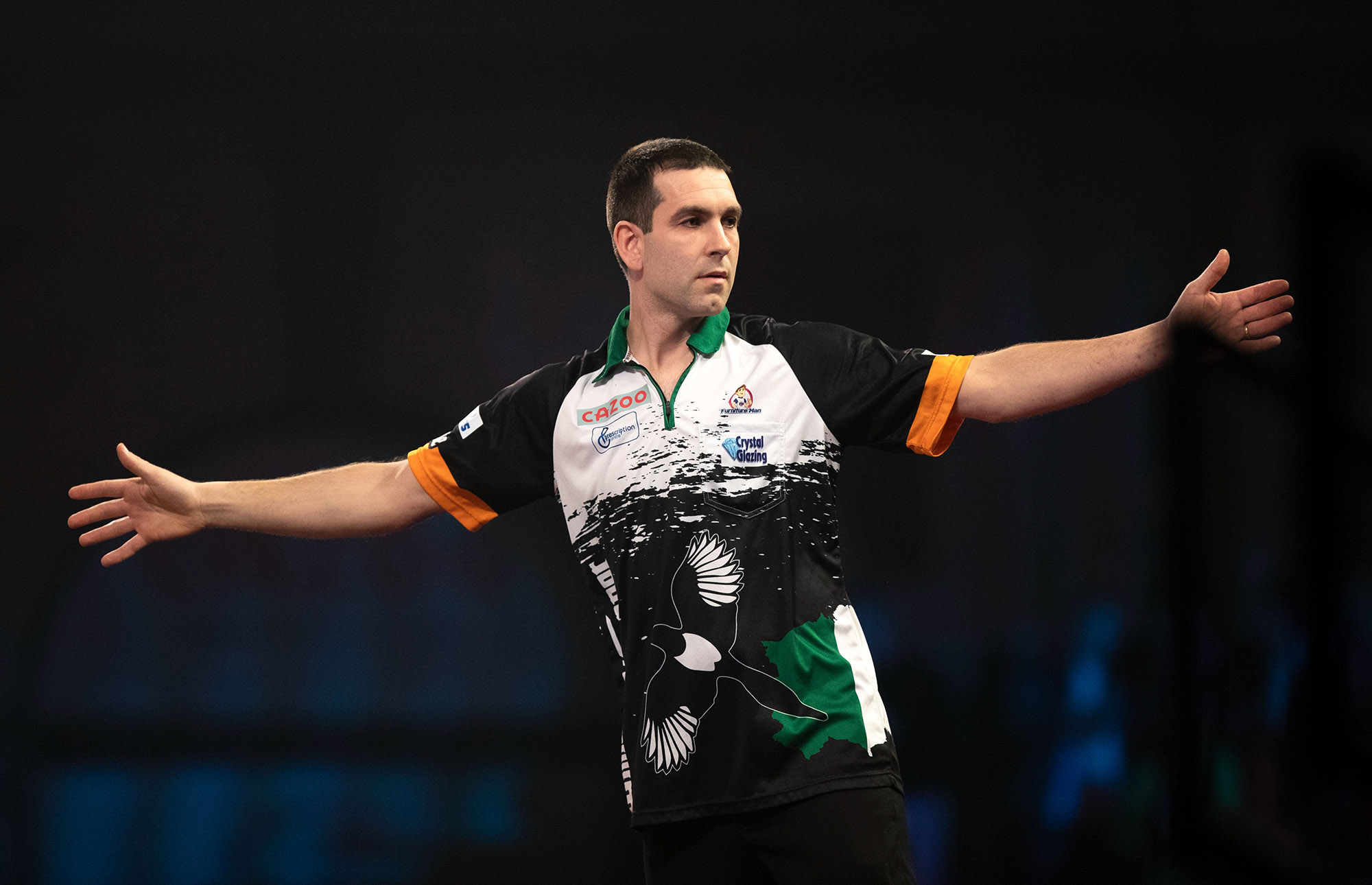 "I'm happy to get the win," reflected O'Connor, who was full of praise for Greaves after setting up a second round clash against Germany's number one Gabriel Clemens. "Beau played absolutely brilliantly. She has got a huge future ahead of her, and hopefully this is the last time I play her for a long time!"

Earlier in the afternoon, Stoke-on-Trent star Lewis began his bid for a third Sid Waddell Trophy with a dominant 3-0 victory over Sweden's number one Daniel Larsson. Lewis relinquished only three legs en route to victory, averaging 93 and firing in six perfect darts midway through set two, and his reward is a second round tie against World Cup winner Damon Heta. 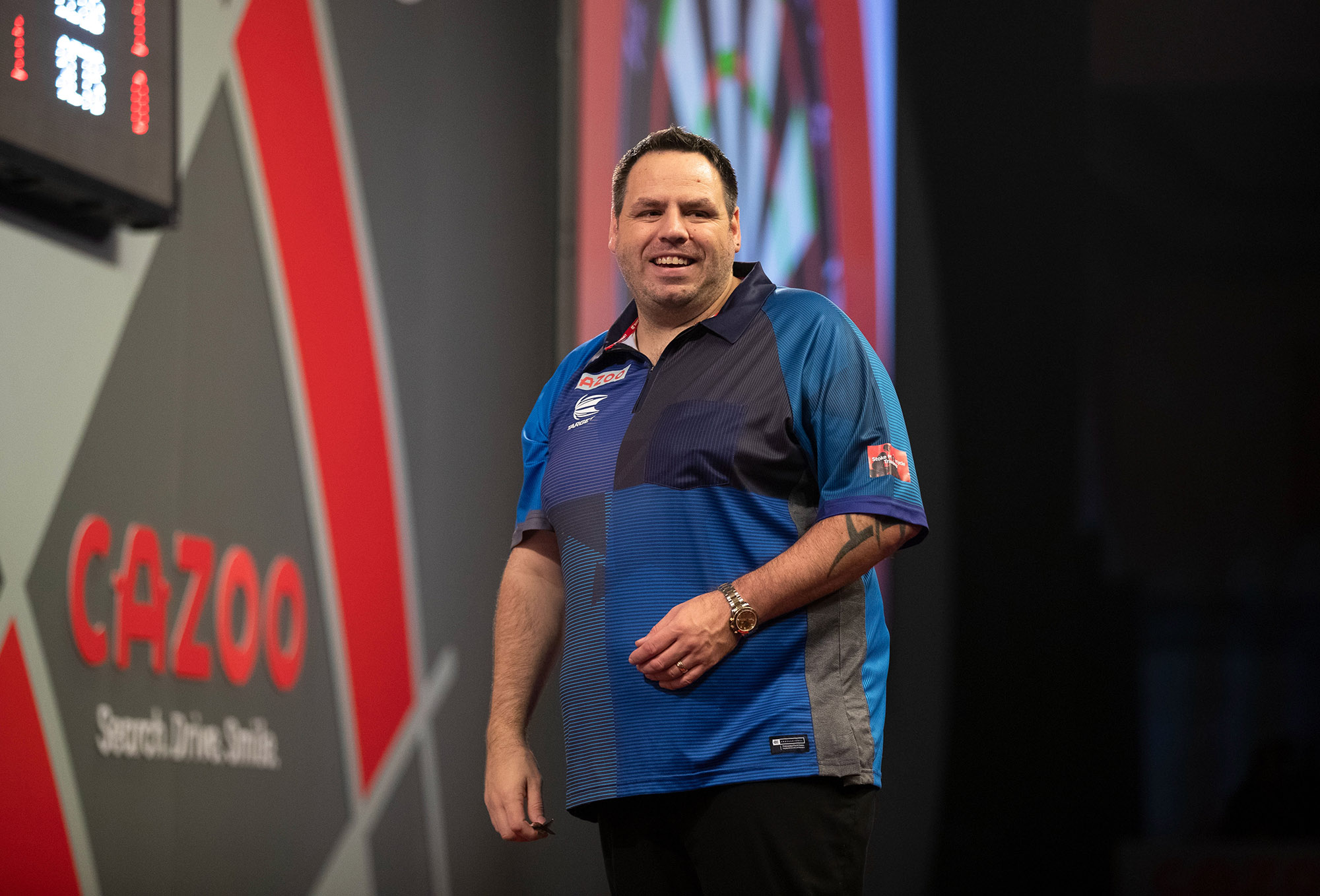 "The first round is always tough. I have been practising really well, but I didn't know what to expect today," conceded Lewis, making his 18th consecutive World Championship appearance. "I feel comfortable up here. There is something magical about this place. I love it and I am up for the fight, trust me."

Elsewhere, an emotional Lourence Ilagan edged out a spirited Rowby-John Rodriguez in a dramatic deciding-leg tussle to secure his first victory on the Alexandra Palace stage since 2013.
Ilagan made a terrific start to proceedings, converting clinical 88, 64, 66 and 116 combination finishes to establish a two-set lead and move to the brink of a place in round two for the first time in his career. Rodriguez came roaring back, reeling off seven consecutive legs to seize the initiative, but he paid the price for spurning four darts for a 2-0 lead in set five, as Ilagan regained his poise in the latter stages to progress.

Florian Hempel also produced a fine comeback to defeat former World Youth Champion Keegan Brown in the second deciding-leg encounter of the evening to create a meeting with fifth seed Luke Humphries. Hempel - who defeated Dimitri Van den Bergh en route to reaching round three on debut 12 months ago - landed seven 180s as he recovered from 2-1 adrift to send Brown to Qualifying School in 2023.

Kim Huybrechts will play reigning champion Peter Wright in the third round, after easing past South African debutant Grant Sampson in straight sets. Sampson stunned UK Open semi-finalist Keane Barry on Thursday's opening night, but he was unable to replicate those heroics against the Belgian, a quarter-finalist at Alexandra Palace in 2012. 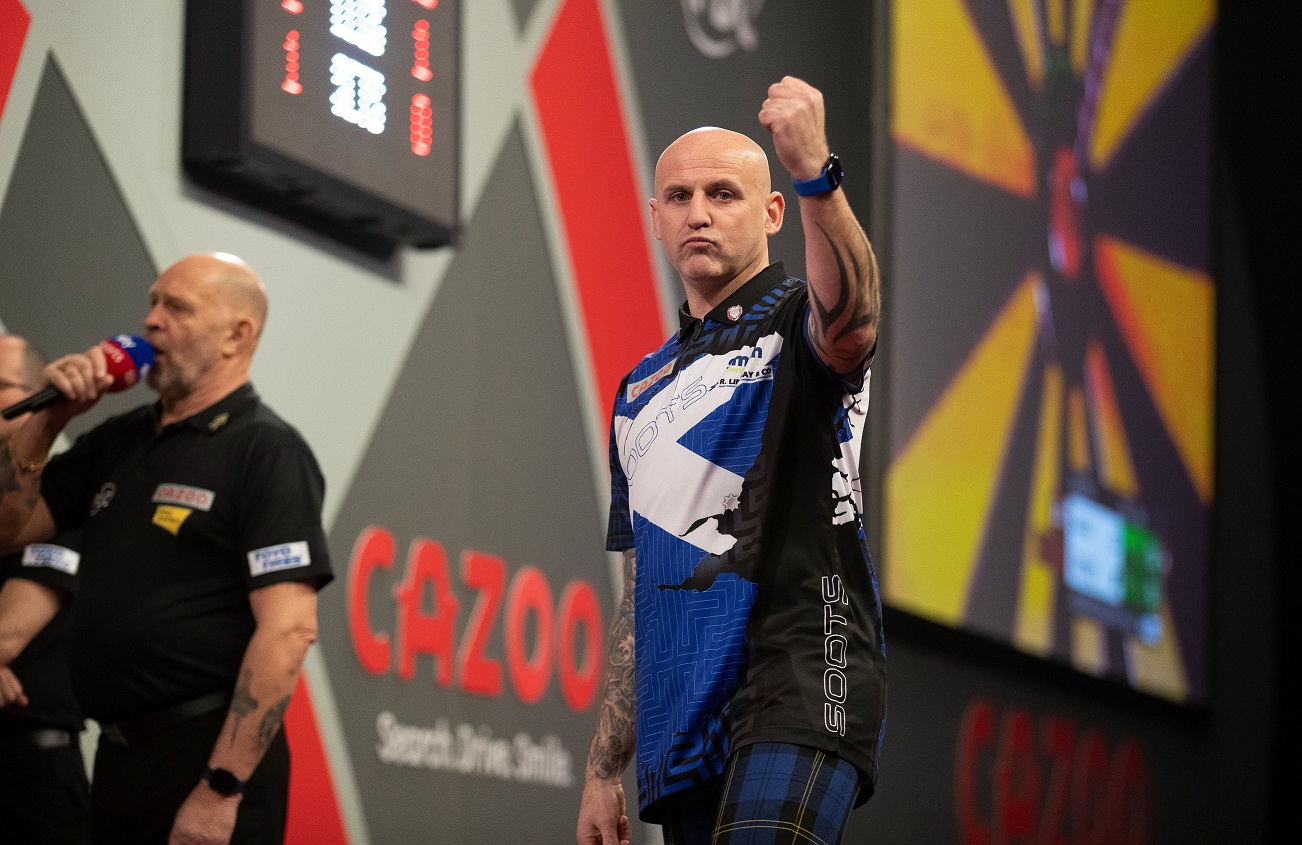 Meanwhile, Alan Soutar will face two-time TV title winner Daryl Gurney in a blockbuster second round tie on Saturday, after kicking off Friday's double session with an emphatic 3-0 success against Mal Cuming. Soutar - who reached the last 16 on debut last year - landed four 180s and converted 124 and 119 finishes to dispatch the Australian, who struggled with nerves on his Alexandra Palace bow.

"I'm absolutely delighted," said Soutar, who kicked off the contest with five perfect darts and wrapped up victory with a 12-dart break of throw. "I know I can play darts, but I need to turn up and play 100% better against Daryl, but I'll take the win and we move on to Saturday."

Boris Krcmar also progressed in comprehensive style, seeing off Japanese qualifier Toru Suzuki in straight sets to secure his first win on the World Championship stage. Krcmar punished Suzuki's profligacy to race into a two-set lead, before defying a late rally from the Japanese star to book a showdown with two-time semi-finalist Nathan Aspinall in round two.

The Cazoo World Darts Championship is being broadcast live on Sky Sports in the UK & Ireland, through the PDC's worldwide broadcast partners including DAZN and Viaplay, and on PDCTV (excluding UK, Ireland, Germany, Austria & Switzerland based subscribers).