Damon Heta and Nathan Aspinall advanced to the third round of the Cazoo World Darts Championship on Sunday, as Scott Williams and Ryan Joyce served up the match of the tournament so far. 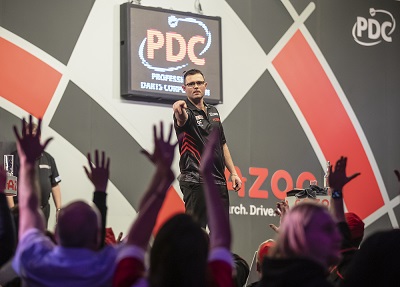 Australia's World Cup hero Heta produced his best performance on the Alexandra Palace stage to make light work of an out-of-sorts Lewis.
Heta averaged 96.17, more than 13 points higher than Lewis, who exits at the second round stage for a third successive year. Having endured a bad run of form in televised events in recent months, Heta silenced his doubters with a victory which sees him move provisionally into the world's top 16.

"A win on TV was always coming, I'm glad to have got the job done today," said Heta. "There are a lot of players above me who have a lot to lose but I've got everything to gain. 'I embraced playing Adrian because he is a name to be reckoned with and I think I rose to the occasion. "I never would've imagined being in the top 16 when I started this journey three years ago, this is just the start for me." 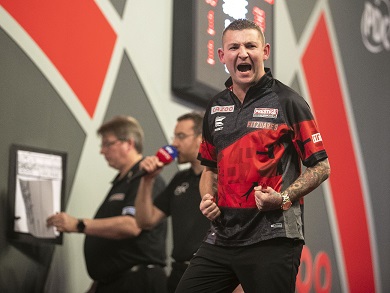 Two-time semi-finalist Aspinall continued his strong record at Ally Pally, with victory over Krcmar maintaining his record of never losing in the tournament before the Christmas break. After the opening two sets were shared, Krcmar landed a 102 checkout to hit the front, before Aspinall reeled off six successive legs to see off the Croatian.

"I never make it easy," Aspinall laughed. "I think I robbed the first set to be fair, but credit to Boris he played a great game. "I dug deep, my finishing wasn't quite there but I found a way to win. "The crowd were amazing, it took me five minutes to get over my walk-on - the crowd were singing my walk-on song well after the music had stopped, it gave me goosebumps. "But I played really well, I'm very happy with my performance." 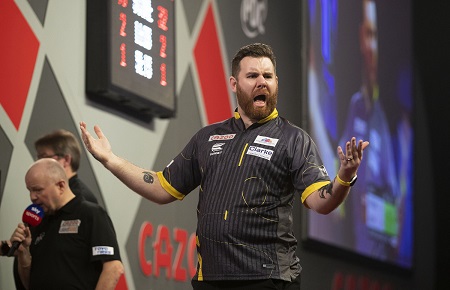 Elsewhere, Williams and Joyce played out one of the highest standard first round encounters seen on the Ally Pally stage.
Former quarter-finalist Joyce's 103.04 was not enough to defy 2022 breakout star Williams, who hit ten 180s and a 164 checkout on his way to an outstanding debut victory.
Williams announced himself on the Ally Pally stage with an average just shy of 116 to take the opening set, before Joyce hit back in equally-impressive style. Though Joyce continued to average over 112 for much of the contest, Williams crucially won the set three decider to regain the lead. Joyce took the lead in the fourth, but Williams responded with a trio of legs to set up a meeting with former World Champion Rob Cross.

"I felt awesome today and that came out on the stage, I know what I'm capable of," said Williams. "The first set I felt absolutely fantastic, then all of a sudden I started missing but then thankfully it came back. "I've been practicing with Rob [Cross] recently and he's been playing like he did when he won the Worlds. "We're good mates but we're both here to do a job, it should be a good game."

Danny Baggish impressed in a 3-0 victory over Matt Campbell in a battle between two of North America's top talents. USA number one Baggish, who reached the third round two years ago, once again produced his best game on the sport's biggest stage to whitewash his Canadian opponent.

Cambell's countryman Jeff Smith will also be heading home after he went down 3-1 to Belgium's Mike De Decker. In-form De Decker caught the eye with a convincing display which saw him fire in eight 180s and hit half of his double attempts.

Madars Razma will take on two-time World Champion Gary Anderson after the Latvian triumphed 3-1 in a battle with Prakash Jiwa.
Indian Qualifier Jiwa missed darts to win the opening set, but atoned for those errors in the second set to level. Jiwa took a 2-1 lead in the third set before World Grand Prix quarter-finalist Razma sparked into life, winning five consecutive legs to seal his passage through.

Karel Sedlacek produced one of the performances of the tournament so far in a 3-0 whitewash of Raymond Smith. A meeting widely billed as a '50-50' tie saw Sedlacek average 98.72 to dump out Australia's Smith, who reached the last 16 of last year's event.

World number one Gerwyn Price will begin his campaign against Luke Woodhouse who scored a 3-0 victory over Vladyslav Omelchenko, who became the first Ukranian player to compete at the World Championship. A professional performance from Woodhouse saw him land three ton-plus checkouts, but the biggest finish of the match came from Omelchenko, who raised the roof with a 143.

Monday will see another double session take place, as former runner-up Simon Whitlock takes on Jose de Sousa in the pick of the afternoon's action before the evening session sees Price take on Woodhouse. The Cazoo World Darts Championship is being broadcast live on Sky Sports in the UK & Ireland, through the PDC's worldwide broadcast partners including DAZN and Viaplay, and on PDCTV (excluding UK, Ireland, Germany, Austria & Switzerland based subscribers).