World number one Gerwyn Price survived an early scare to secure his place in round three at the Cazoo World Darts Championship on Monday, as Jose De Sousa recovered from 2-0 down to stun Simon Whitlock at Alexandra Palace. 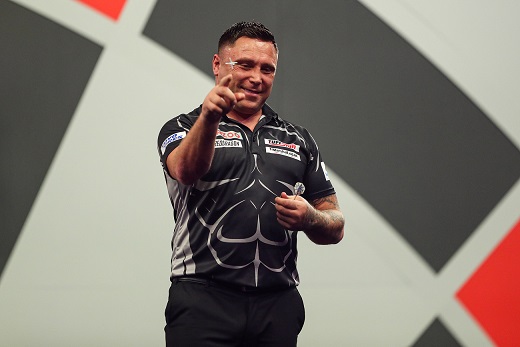 Price, who lifted the Sid Waddell Trophy in 2021, relinquished the opening set against an impressive Luke Woodhouse, but the top seed turned on the style in the closing stages to confirm his post-Christmas return.
Woodhouse - who defeated Ukrainian history-maker Vladyslav Omelchenko in his opener on Sunday - made a blistering start and registered legs of 15, 14 and 15 darts to seal the opening set with a 104 average. However, the Welshman restored parity at one set apiece with a clinical 83 outshot in a second-set decider, before capitalising on key misses from Woodhouse in set three to seize the initiative. Price won six of the last seven legs to keep his bid for a second World Championship crown alive, converting a 76 finish on the bull and taking out a superb 150 checkout in the final set to prevail.

"I put myself under a lot of pressure. I'm defending a lot of ranking points and I really needed to get through this game," reflected Price, who averaged 92, landed two 180s and hit 34% of his attempts at double. "Regardless of the performance, I'm glad I came through that because I'm sure I will improve throughout the rest of the tournament. "I was really nervous and I wanted to have a good start. Sometimes you try too hard, and towards the end of the game I began to play a little bit better." 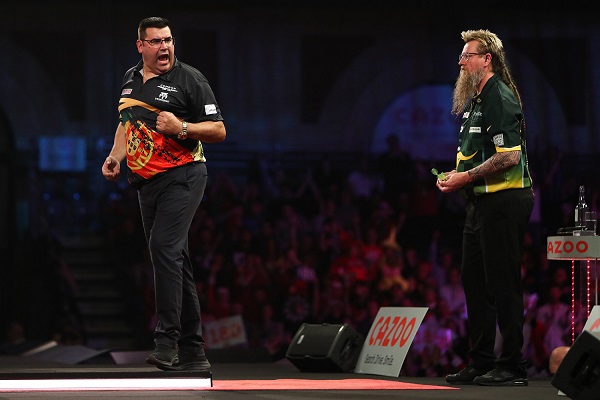 Meanwhile, De Sousa became the first player to come from two sets down and triumph at this year's World Championship, producing a stirring fightback to dump out 2010 runner-up Whitlock. Whitlock punished a sluggish start from the Portuguese star to establish a two-set lead, but De Sousa came roaring back in superb style, winning eight of the last ten legs to complete the comeback.

"This means the world to me," said an emotional De Sousa, who converted 114, 127 and 136 finishes to progress to round three for the third straight year. "When I was 2-0 down I thought I had nothing to lose, and I was able to change the game in my favour. I want to recover my game and make good performances. It's the only way I can do this job." 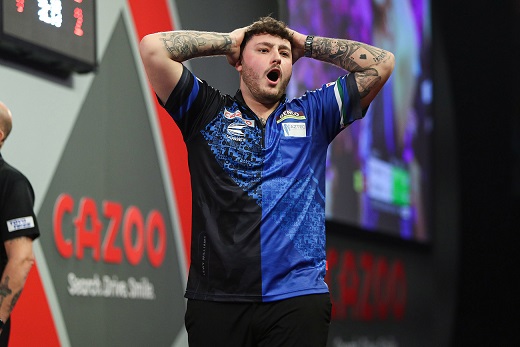 Earlier in the day, youngster Lewy Williams came agonisingly close to achieving perfection in his emphatic straight-sets victory over Niels Zonneveld. Williams wired double 12 for a magical match-winning nine-darter - having dropped his dart midway through the third visit when needing 141 - but regained his composure to complete the win and set up a round two tie with Michael van Gerwen.

"When I dropped my dart I was like: 'Oh no!' Then when I hit the treble 19, I thought it was going in," admitted the 20-year-old, who is through to round two for the second straight year. "It felt so good when it left my hand. It felt better than the treble 20 and treble 19 together, but I'm just buzzing to get through."

Elsewhere, Andrew Gilding made a winning return on his first World Championship appearance for six years, edging out debutant Robert Owen in a hard-fought deciding-set. Gilding, who took out a skin-saving 105 checkout en route to restoring parity at one apiece, produced the goods in the fifth-set decider, following up a 13-darter with a 120 finish to advance.

"I'm so happy. I think that 105 finish was the turning point," reflected Gilding, who will now take on Dave Chisnall in a repeat of September's Belgian Darts Open final. "I had forgotten what it was like to be on that stage. I will have to play better against Dave, but maybe I have got over the shock of the stage after six years." 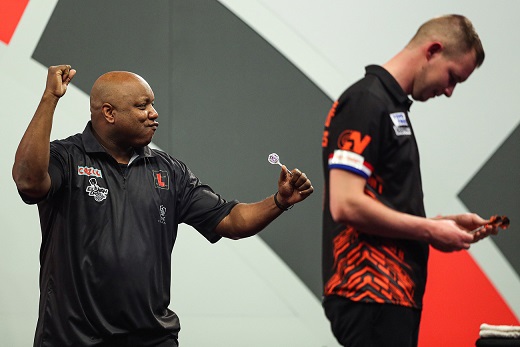 Gates instantly won the hearts of the Alexandra Palace crowd in his 3-1 win over Dutch star Geert Nentjes, dancing his way through to round two by reeling off three straight sets to progress. The American made a tentative start to the tie, but he completed the turnaround with finishes of 100, 111 and 128 to book a meeting with former Lakeside Championship winner Stephen Bunting.

Jansen, meanwhile, survived a scare to edge out PDC Asian Championship runner-up Paolo Nebrida in a gruelling five-set tussle. The Dutchman squandered four match darts for a 3-0 win and Nebrida rallied to level - aided by a 107 average in set four - only for Jansen to regain his poise in the final set to prevail.

Jansen's fellow Dutchman Van Trijp also enjoyed a debut to remember, storming to an emphatic 3-0 win over Steve Beaton - who was competing in a record-extending 32nd consecutive World Championship. Van Trijp, a winner of two Challenge Tour events in 2022, fired in four 180s to set up a second round clash against seventh seed Jonny Clayton on Friday - the eve of his 26th birthday.

The Cazoo World Darts Championship is being broadcast live on Sky Sports in the UK & Ireland, through the PDC's worldwide broadcast partners including DAZN and Viaplay, and on PDCTV (excluding UK, Ireland, Germany, Austria & Switzerland based subscribers).