VAN BARNEVELD BATTLES PAST MEIKLE TO SET UP PRICE SHOWDOWN

Raymond van Barneveld battled back to defeat Ryan Meikle and set up a mouth-watering third round showdown against Gerwyn Price at the Cazoo World Darts Championship on Tuesday.

Van Barneveld - making his landmark 30th World Championship appearance - was struck down by food poisoning earlier in the day, but he displayed all his fighting qualities to reach round three at Alexandra Palace for the first time in four years.
Meikle edged past Lisa Ashton in round one, and 'The Barber' had the scalp of another multiple World Champion in his sights after securing the opening set with a ton-plus average. The five-time World Champion responded in emphatic fashion, reeling off three straight legs in 13, 14 and 12 darts to level proceedings - boasting a stunning set average of 115.92. The Dutch veteran then came through a crucial third-set decider to establish control, and with Meikle visibly deflated, Van Barneveld rattled through set four in serene fashion to seal a 3-1 success.

"I'm really pleased with this victory. I had to dig in and work hard to win this game," said Van Barneveld, who averaged 95, landed seven 180s and converted 50% of his attempts at double. "My willpower to win this game was enormous, but all credit to Ryan, he played an amazing game tonight."
Van Barneveld will now take on top seed and 2021 World Champion Price in a blockbuster third round tie, having claimed a brace of victories over the Welshman at last month's Grand Slam of Darts.
"I love Gerwyn. I always love to see him play. He is a fighter. "I have got a lot of respect for Gerwyn, but I believe in myself, I'm playing well and I cannot wait to play against the world number one." 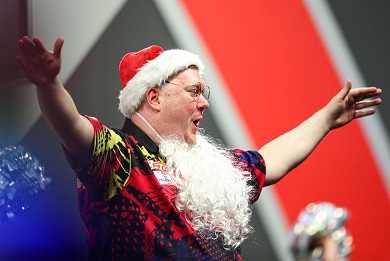 Elsewhere, Ricky Evans fought back from a set down to record a 3-1 win over Fallon Sherrock, who was bidding to create more history on the sport's biggest stage.
The 28-year-old defeated Ted Evetts and Mensur Suljovic three years ago to become the first woman to triumph at the PDC World Championship, and she produced another impressive display in the capital.
Evans certainly embraced the festive spirit, walking on to 'Merry Christmas Everyone' by Shakin' Stevens and donning a Santa hat and beard during a memorable walk-on. However, Sherrock gave the capacity crowd plenty to cheer in the opening exchanges, reeling off three successive legs in 17, 14 and 17 darts to draw first blood. Sherrock also seized the early initiative in set two with a clinical 76 combination, but a 122 finish on the bull from Evans turned the tide, as the Kettering star restored parity at one set apiece. The Women's World Matchplay winner recovered to move ahead in set three, but she paid the price for squandering four darts for a 2-1 lead, as Evans pinned tops to move a set away from victory. The fourth set followed a similar pattern, although after Sherrock spurned two further darts to force a decider, Evans raced to victory, sealing the deal with a quick-fire 107 combination to advance.

"I knew it was going to be tough, but I didn't expect it to be that tough. She is so good," said Evans, who will play Masters champion Joe Cullen for a place in round three. "Fallon was the better player. I got away with that, but I'm so happy to win. I have got nothing to lose now." 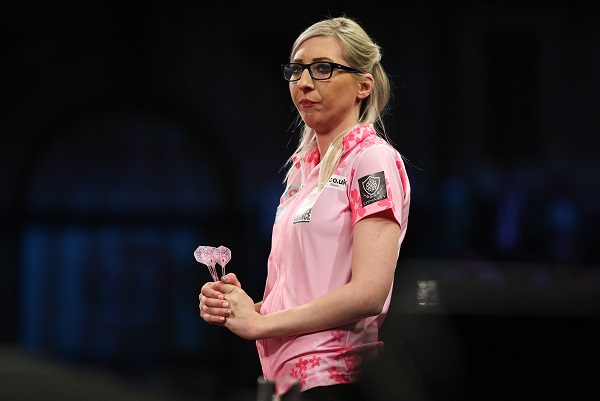 Jim Williams produced a fine comeback to edge out Sebastian Bialecki in an entertaining five-set affair, winning six of the last seven legs to set up a meeting with James Wade in round two.
Following a tentative start, the contest sparked into life in a high-quality third set, as Bialecki followed up legs of 13 and 14 darts with a superb 136 finish to establish a 2-1 lead. The Welshman responded by reeling off set four without reply to force a final set, and after kicking it off with a crucial 130 checkout on the bull, Williams' experience paid dividends in the closing stages.

"I'm delighted with the win, but I was really nervous. That was a tough one to get through," admitted Williams, who averaged 91, landed four 180s and also converted a 154 checkout. "James is a great player, but I'm always comfortable playing James, so hopefully I can relax and play my game."

Elsewhere, Jimmy Hendriks came through a gruelling four-set tussle against Jamie Hughes to triumph on his Alexandra Palace bow, condemning Hughes to a fourth straight defeat in the capital.
Hughes fought back to win an edgy opening set, but Hendriks battled back, firing in three 180s and taking out a superb tops-tops 104 finish in the penultimate leg to seal his progression.

"It was a tough battle. I am really relieved," reflected the 28-year-old Dutchman, who will play Brendan Dolan for a place in the third round. "It is a special feeling to play on this stage. Unfortunately I didn't play my best game, but hopefully I can show it in the next round."