Michael van Gerwen and Josh Rock breezed through to the third round on Day Seven of the Cazoo World Darts Championship as Alexandra Palace action continued.

Three-time World Champion Van Gerwen laid down a marker with a 3-0 demolition of Lewy Williams, while Rock continued his debut run with a straight sets win over Callan Rydz. 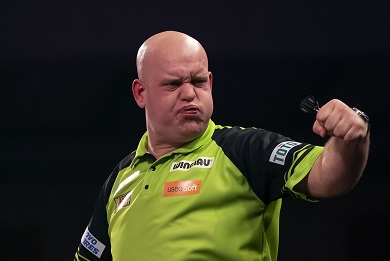 Third seed Van Gerwen spent less than 20 minutes on the oche in his triumph over Welsh youngster Williams.
After dropping his only leg of the match in the first set, Van Gerwen went through the gears, averaging an incredible 125 in set two with legs of 13, 12 and 11 darts. The three-time World Champion ended the match with a 101.84 average, his 34th ton-plus average on the Alexandra Palace stage, to lay down a marker for his rivals.

"It wasn't perfect but I think I played quite well," said Van Gerwen, the pre-tournament favourite. "I had to work hard for it, a performance like this doesn't come from nothing. It gives me a lot of pleasure to be back on this stage, Ally Pally has a special place in my heart. "To receive such an amazing reception from the crowd means a lot to me. "I'm always trying to play darts at the highest level I possibly can; I know what I'm capable of." 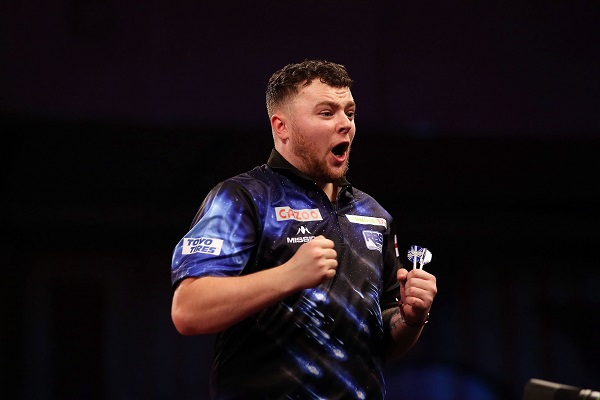 Newcomer Josh Rock also made it through in rapid fashion, taking less than 25 minutes to defeat Callan Rydz in straight sets.
Northern Ireland's Rock, who is now rated as joint-fourth favourite to lift the title on his World Championship debut, made light work of last year's quarter-finalist. Though the tie between two of the sport's brightest young talents didn't live up to its billing, Rock was in control of the contest throughout as he dropped just four sets against an out-of-sorts Rydz.

"I'm happy to win but I'm still disappointed that I haven't produced my best game yet," Rock admitted. "I'm frustrated but it's hard when you're on that stage, you try that extra bit harder because we're all here to be World Champion. "I was expecting Callan to play a lot better than he did; once I knew he wasn't up to his usual standard I slacked off mentally which was a mistake. "I'm going to go away and enjoy Christmas with my family and I know I will be far better when I come back after the break." 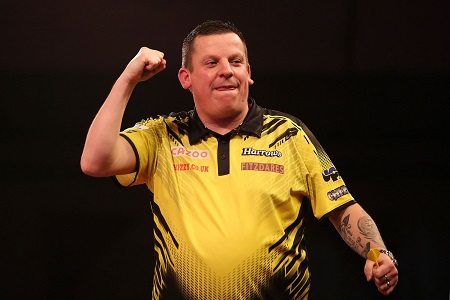 Dave Chisnall caught the eye with a strong display in his 3-1 victory over Andrew Gilding.
One of the highest-quality affairs of the tournament so far saw both players land seven 180s, with missed doubles denying Chisnall a ton-plus average. After Gilding took the opening set, Chisnall replied with a 119 average in set two to level. Chisnall won last-leg deciders in each of the final two sets to ensure his passage into round three, where he now meets Stephen Bunting.

"I knew Andrew was going to pay well so I had to be on my A-game," said Chisnall. "It's pleasing to have played so well for most of the game. I feel really good, I couldn't wait to get on that stage and it showed in my performance." 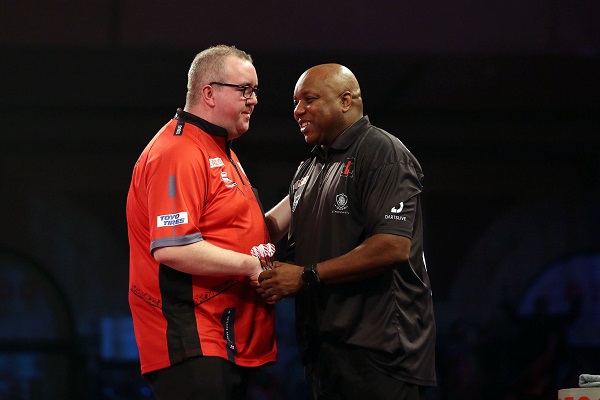 Chisnall will take on Bunting in a north-west derby after the St Helens landed seven 180s and two-ton plus checkouts on his way to a 3-1 win over Leonard Gates.
American fan-favourite Gates - who overcame Geert Nentjes in round one - continued to shine on his Alexandra Palace debut, sealing the opening set with a 101 checkout. Both players were blighted by bouts of missed doubles in the second set, though Bunting found a way to level the contest. Former semi-finalist Bunting took the third set 3-1, before landing a 124 checkout on his way to wrapping up victory in the set four.

Veteran Mervyn King held off a comeback from Danny Baggish to earn a 3-2 victory in a thrilling contest.
Last year's quarter-finalist King won deciding legs in the opening two sets to open up a 2-0 lead, only for Baggish to fight back to win back-to-back sets and force a decider. The American took the opening leg of the final set, before King won the next three - each in 15 darts or fewer - to book his place in the third round.

"I'm just pleased to get through, it's nice to get over the line even though I felt I made it a lot harder than it should have been," said King. "I could have won it in three or four sets, but to win it in five is fine. "My whole year has been terrible to be honest - I've been trying so hard and getting nowhere, but now I have the chance to put that right with a run here."

Gabriel Clemens impressed in a 3-0 rout of William O'Connor to reach the third round for a third successive year. In a game widely-billed as a '50-50' tie, Clemens took the deciding legs of the opening two sets to take a commanding lead. The German pressed home the advantage in the third, winning it without reply to book his place in round three - where James Wade or Jim Williams awaits after Christmas.

Lithuania's Darius Labanauskas fought back from 2-0 down to defeat John O'Shea 3-2 in Wednesday's opening tie at Alexandra Palace. Former quarter-finalist Labanauskas, who hit a nine-darter in last year's event, lost the deciding legs of the opening two sets to trail 2-0 to Irish debutant O'Shea but battled back in style to progress to a second round tie with European Champion Ross Smith.

Martijn Kleermaker enjoyed straightforward progression with a 3-0 victory over Xicheng Han in the final tie of the first round. Kleermaker, who reached the last 16 of last year's event, made light work of Chinese debutant Han, dropping just two legs on his way to a comfortable victory.

Thursday will see a double session of second round action take place, as Dirk van Duijvenbode begins his campaign against Karel Sedlacek in the afternoon. The evening session will see two-time World Champion Gary Anderson take on Madars Razma, with James Wade and Luke Humphries also among the players in action.