The World Seniors Darts Championship is a joint Project of MODUS Sports and Jason Frasier. Frasier got known for a Snooker Legends Exhibitions Tour which he transformed in a global circuit which is ratified by the sport's governing body So it could be possible should the World Seniors Darts Championship be a success something similar is planned for the sport of darts.

All players who are older than 50 years of age can take part in the World Senior Darts Championship and don't have a PDC Tour Card.

The field of participants will consist of 24 players. Beside 15 former PDC and BDO World Champions seven more players were invited. The last two places will be decided by a qualifier in which not PDC Tour Card holders are allowed to take part.

The qualifier will be played on November. The tournament then will be played from 3. - 6. February. The venue will be the Circus Tavern in London - for many years the venue for the PDC World Championship. 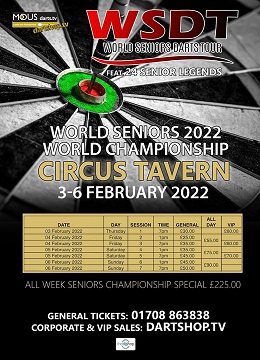 Negotiations about a TV live broadcast are conducted.