The Europe Cup Youth is a WDF tournament, which is played every year but in different countries.
The first Europe Cup Youth was played in 1990 and from beginning there always was played a single and a double event both for the girld and the boys Beside for the boys a team event takes place as well.

Youthplayers from all the Euroepan member xountries of the WDF can take part in the tournament. While the youth events of the World Cup, the Asia/Pacific Cup and the America Cup are played in the context of those tournaments the WDF Europe Cup Youth always takes place seperately and is assigned seprately as well.
Beside this the format is mostly the same in all WDF Cups. 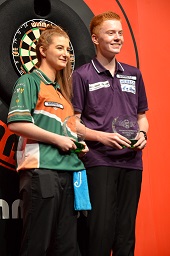